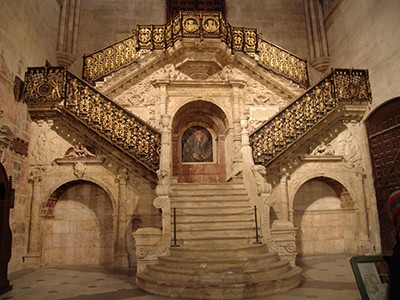 The Burgos group specialized in baroque music Burgos Baroque Ensemble will offer tomorrow at 20.00 hours a concert in the Golden Stairs of Burgos Cathedral, within the acts of commemoration of the 800 years that the Seo will fulfill in 2021. Under the title ‘De Profundis’, the VIII Centennial Foundation of the Cathedral. Burgos 2021 presents a musical program of atonement and penance around works by Bach, Zelenka and the Chapel Master of the Burgos temple Francisco Hernández Yllana.

The approaches of Bach and Zelenka will show two very different styles in the formal and the emotional. A) Yes, he Miserere en do menor Zelenka was composed in 1738 and includes a large number of resources and stylistic means typical of the time. It is a work of a tremendously emotional musical language that still surprises with its disturbing character. The Cantata BWV 131 by Bach was composed in 1707 for a text that is almost entirely the Psalm 130 ‘De Profundis’.

Premiere of a work from the Cathedral Archive

For this concert, Burgos Baroque Ensemble has rescued from the Cathedral Archive the forgive me, Dominated, a composition forgotten for centuries created for the office of the dead and composed by Francisco Hernández Yllana. This musician arrived at La Seo Burgos in 1729 and from then until his death, in 1780, he was master of the cathedral chapel.

This work starts from the plain song, to which he adds expressive elements of modernity, as the ways of dealing with the instrumentation and emotionality of singing, how important it was in the Baroque.

The Toledo Javier Ulises Illán, specialist in the repertoire of the 18th century, will direct the concert, which will feature a choir and an instrumental ensemble that will bring together forty vocalists and musicians on stage. This will be the second participation of Burgos Baroque Ensemble in the events around the VIII Centenary of the Cathedral, after his recital of 2018 in the chapel of the Constables, focused on that occasion on the music of the time of Claudio Monteverdi and the Venetian School.

This specialized training from Burgos was born in 2016 and combines respect for interpretations with historical rigor with period instruments with innovative staging, that try to bring ancient music closer to the general public.