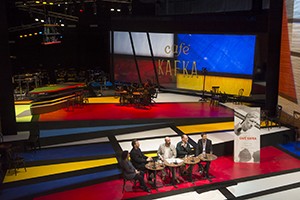 The Palau de les Arts Reina Sofia welcomes sunday 22 May the premiere in Spain of the opera "Café Kafka", from Francisco Coll (Valencia, 1985) at Martín y Soler Theatre. The representations of this work, as noted by the Mayor Davide Livermore in his presentation, are dedicated to the memory of Immaculate Thomas, main driver of this project.

"It is about, Likewise, of an appointment indicated in the X Season of Les Arts ", Mayor Davide Livermore has highlighted. “Not every day an opera house has the opportunity to premiere a new play in this country, of a composer from his city, plus, with a new production of such force ".

"Café Kafka", with music by Francisco Coll and libretto by Meredith Oakes, it's a chamber opera in one act, written for five soloists and ten instrumentalists. The work was commissioned by the Royal Opera House Covent Garden in London, the Aldeburgh Festival and Leeds North Opera.

The American settled in Italy Christopher Franklin assumes the musical direction of this piece, which received the praise of the English critics at its premiere. “Café Kafka” is also Franklin's operatic debut at Les Arts, where he has previously conducted the OCV in a concert of the Peruvian tenor Juan Diego Florez.

Franklin is one of the emerging batons on the European music scene, who has worked in leading Italian lyric centers, including the Maggio Musicale Fiorentino, Rome Opera, the Teatro Regio in Turin, as well as in the festivals of Pesaro or Jesi.

Rotary and specialized media welcomed Francisco Coll's work with enthusiasm: "It can become a classic", subrayó ‘The Independent’, "Coll could be the composer Spain has been waiting for a long time", declared the ‘BBC Music Magazine’ or “Café Kafka” will remain for posterity ", according to ‘The Stage’.

Les Arts presents “Café Kafka” in a new production, with the stage direction of the British man living in Valencia Alexander Herold, which has been carried out entirely by the Theater Technical Team. The assembly has scenography by Manuel Zuriaga, wardrobe of José María Adame, lighting by Antonio Castro, video creation by Miguel Bosch, based on images by Quique Reche, and scenic movements by Ricardo Sile.

According Alexander Herold, "Coll's opera is a challenge for any stage director". "This score is not just an opera, it is also a ballet, a movie, a kaleidoscopic investigation into the yoke that afflicts our society: loneliness".

“The music so dense -in Herold's words-, so full of life, humor, jokes, ironies and dance rhythms, demands a setting that reflects this dissonant and surreal world. The structure and color of the music suggested to me the pure and separate colors of Piet Mondrian's world of painting., artist who divides spaces of color with black lines ".

A cast of young singers stars in "Café Kafka". The cast includes current artists from the Center de Perfeccinment Plácido Domingo, as Miriam Zubieta, Tatiana Irizarry, Elisa Barbero and Pablo Aranday, plus a former student of this project, Pablo García López, and British William Purefoy, who participated in the premiere in 2014 of this work.

"Café Kafka", is based on texts by the Czech author but is an independent work that, takes the Prague-born writer as a starting point, to take the viewer to a current social reality. For Francisco Coll, "Kafka was a visionary. The fiction he narrated, has become a reality today. Thus, this work could be understood as a mirror of our society, in which we can feel identified ".

The composer, who has remembered the fantastic reception of the work in London, predicts that the Valencian public who come to the performances “will enjoy the experience”.

Meanwhile, Davide Livermore has pointed out that the premiere this Sunday of "Café Kafka" marks, Likewise, the start of the last leg of the Les Arts season, with two other works also much closer to contemporaneity than the usual repertoire: "Joan of Arc at the stake", Honegger, and "" A Midsummer Night's Dream ", Britten.

The Intendant-artistic director has recognized that the work of a public theater is "to bring opera to all citizens, but also to nourish the viewers with new suggestions and ideas with which to open the mind and form a critical population. What better reflection and criticism of our society, their vices and miseries, than the one that makes the art of our time!”, has emphasized Livermore,

"Café Kafka", concludes, "It is an excellent proposal to approach the contemporary repertoire: an opera lasting less than an hour, a lively and colorful staging, a teacher and some young and energetic singers, that will make everyone enjoy ”.

In addition to the premiere on Sunday 22, the Teatre Martín i Soler de Les Arts will host more performances of “Café Kafka” on days 25 Y 28, with a didactic function the 31 of May. Tickets for this show have a single price of 25 euros.