The following days 22, 23 Y 24 October, the latter in double session at 17.00 and to the 21.00 hours, the Teatro Real will inaugurate its dance season with the premiere of Fire, choreography of Antonio Gades inspired by The love wizard, by Manuel Falla, and last collaboration of the artist with the film director Carlos Saura, performed by the Antonio Gades Company, with which you also want to pay tribute to the recently disappeared Gerardo Vera, creator of the stage space and costumes for this production, for which he obtained the Goya in 1987 in the film version.

The orchestral fragments will be performed by the Head of the Royal Theatre Orchestra under the direction of Miquel Ortega.

With this work, the Teatro Real completes the staging of the choreographic production of one of the most relevant figures in the history of dance in Spain, of which they have already been offered in previous seasons Blood Wedding, Carmen, Fuenteovejuna Y Suite Flamenca, all of them recorded on DVD and available on the audiovisual platform My Opera Player.

Fire, born in 1989 commissioned by the Châtelet Theater in Paris. It is an exponent of the purest Gades seal: "Go back to tradition if you want to evolve"; a transitional work between the already mythical montages of Carmen Y Fuenteovejuna, in which there are some resources created by the artist that were hardly seen and were never repeated and that constitute, nowadays, a surprise that keeps the work fresh.

The Antonio Gades Company replaces the Munich Ballet, planned in the programming on these same dates, that he has not been able to travel to Spain due to health restrictions imposed by the German Government.

Antonio Gades made Spanish dance a universal style with a very broad expressive capacity. This allowed him to carry, to all corners of the world, without using the words, classics of world literature such as Blood Wedding by Federico García Lorca or Fuenteovejuna by Lope de Vega and Carmen that he signed with Carlos Saura and that has remained as one of the most recognized approaches to this Spanish and universal myth. After the death of the choreographer in 2004, The Antonio Gades Foundation's main objectives are the dissemination and conservation of the dancer's legacy, sponsors the Antonio Gades Company and keeps the school alive gadesiana: an aesthetic language rooted in the popular culture and art of Spain, but refined in the artistic and intellectual avant-gardes of the last half of the 20th century.

The Antonio Gades Foundation is a private institution, nonprofit, that is entrusted with maintenance, the care and dissemination of the work of the Spanish choreographer and dancer. To that end, custody and catalog the funds of an important documentary archive related to his artistic life, supervises the reconstruction of his choreographies and edits publications that delve into his work. further, promotes an important pedagogical program aimed at promoting knowledge and appreciation of Spanish Dance and Flamenco. Founded in 2004 by Gades himself, the Foundation is currently run by his widow, Eugenia Eiriz, who works for the fulfillment of the foundational purposes with the support of his close collaborator Josep Torrent and under the presidency of María Esteve, actress and eldest daughter of the teacher and Pepa Flores. In 2019, the Antonio Gades Foundation receives the Gold Medal from the Academy of Performing Arts of Spain for its “magnificent work of conservation and promotion of the memory of the great master of Spanish dance Antonio Gades”. 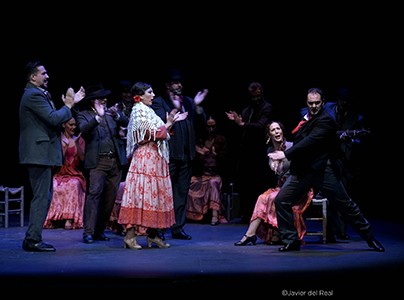