National auditorium you will receive between 22 April and 9 from June to these extraordinary quartets accompanied by leading figures such as Amihai Penny (together with the Belcea Quartet); soprano Katharina Konradi (with the Schumann Quartet). the tenor Mark Padmore will accompany the Elias Quartet in its presentation in the cycle.

The Londoner Joseph Phibbs has had Param Vir as teachers, Harrison Birtwistle y Steven Stucky y su Quartet No. 3 was premiered by the Belcea at Carnegie Hall in 2018. Mendelssohn composed his Quintet, on. 87 in the vicinity of the writing of his oratory Elijah and under the impression made by the violinist Ferdinand David, what seems to be guessed in your writing. Brahms, forty five years later, I believed that his Quintet, on. 111 it would be his last work, perhaps because its opus number coincided with that of the last of Beethoven's piano sonatas or perhaps also because twilight was approaching.

The four quotes with which the cycle Liceo de Cámara XXI closes its season 20/21 will star a real poker of aces, four string quartets that put the finishing touch to a season in which this series has once again shone with its own light, offering the best of the world scene in chamber music. Together they will trace in four concerts an exciting musical panorama through the scores of Felix Mendelssohn, Johannes Brahms, Franz Joseph Haydn, Benjamin Britten, Johann Sebastian Bach, Gabriel Fauré or Robert Schumann, among others. We will enter the final stretch of the cycle on Thursday 22 of April with the Belcea Quartet, a reference grouping well known to fans of the cycle, that in this concert will be accompanied by a luxury soloist: Amihai Penny, viola soloist of the Berliner Philharmoniker. In the evening, works from the classical period will be heard -Felix Mendelssohn, Johannes Brahms- together with the premiere in Spain of a recent work by the British Joseph Phibbs. He 13 of May, and after more than 10 years of waiting, the mythical returns to Madrid Cuarteto Weaver -founded in Hungary and settled in the United States-, currently considered one of the best chamber groups in the world. The set will tackle pieces by Franz Joseph Haydn and Johannes Brahms along with a foray into the work of Benjamin Britten. The third appointment in this final stretch of ‘Liceo de Cámara XXI’ will be 2 of June he Schumann Quartet, well known also by the CNDM public, with the German soprano Katharina Konradi -young vocal value widely consolidated after passing through festivals, European opera houses and concert halls-, with an exciting program in which you will listen to a selection of The Art of Fugue by Bach together with the quartet based on this work that Jörg Widmann premiered in 2005. The poker of aces will be completed on 9 of June with the presentation at the CNDM of the Elias Quartet with the renowned British tenor Mark Padmore. Together they will face a program in which pieces by Haydn will meet, Gabriel Fauré y Ralph Vaughan Williams.

The concerts of Liceo de Cámara XXI of the National Center for Musical Diffusion (CNDM) develop in the Chamber Hall of the National Music Auditorium of Madrid, to 19.30 hours. Tickets are on sale between € 10 and € 20 and are available at the box office of the National Auditorium, INAEM network of theaters, www.entradasinaem.es and the telephone 91 193 93 21. 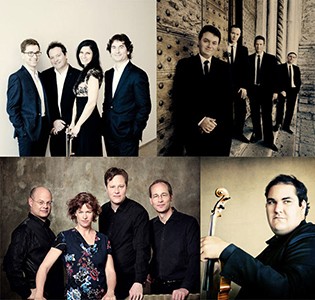 The next three quotations cycle Liceo de Cámara XXI, focusing on chamber music, They will be carried out by a trio of outstanding quartets: on Tuesday 10 of April, he Belcea Quartet will perform works by Haydn Josep, György Ligeti Ludwig van Beethoven y; on Sunday 15 of April, he Quartet Mandelring with Joaquín Riquelme, violist of the Berlin Philharmonic Orchestra, will present pieces of Johannes Brahms and Felix Mendelssohn with two “Tributes” written by György Kurtág and Tuesday 17 of April, Jerusalem Quartet returns to this cycle of works by Antonin Dvorak, Leos Janácek y Erwin Schulhoff. All concerts of this music series Musical National Broadcasting Center (CNDM) They develop in the Chamber Hall of the National Music Auditorium in Madrid, to 19.30 hours. The latest posts, with a price of 10 € to 20 €, They are available at the box offices of the National Auditorium, INAEM theaters, www.entradasinaem.es Y 902 22 49 49

Founded at the Royal College of Music in London 1994 and living in England, the founding members Belcea Quartet Romanian violinist Corina are Belcea and Polish violist Krzysztof Chorzelski, whose artistic origin, very different from the rest of the assembly, It provides a more traditional development received by their mentors: Alban Berg Quartet and Amadeus Quartet. This spectrum extends to the French musicians Axel Schacher (fiddle) y Antoine Lederlin (cello), thus combining their diverse influences in a common musical language. The Quartet regularly plays with great success in theaters around the world, between them, the Concertgebouw in Amsterdam, Wigmore Hall de Londres, and Carnegie Hall in New York and at the Salzburg Festival, Aldeburgh, Edinburgh and Schubertiade in Schwarzenberg and share residence in the Vienna Konzerthaus with the Artemis Quartet from 2010. It is also Quartet in Residence at the Guildhall School of Music and Drama in London. The musicians recently created the Belcea Quartet Trust, whose main objective is to support and inspire young string quartets through a series of intensive classes organized according to the needs of each selected set, and to support the launch of new works by leading composers today. They have extensive discography. During his collaboration with EMI Classics, the Quartet recorded the Britten and Bartók Quartets, and works by Schubert, Brahms, Mozart, Debussy, Ravel Dutilleux, among others. In 2012 Y 2013, the Quartet recorded the Beethoven Quartets live in Benjamin Britten Studio, recording was published by ZigZag Territoires, new label Quartet (Premio ECHO Klassik).

He Quartet Mandelring He noted for its expressiveness, colossal homogeneity and firm will to search for the essence of music. His first major awards in music competitions – Munich (HIGHER), Evian (International String Quartet Competition) y Reggio Emilia (Premio Paolo Borciani), They marked the beginning of his international career. Currently the group operates in the musical centers around the world, such as Amsterdam, Brussels, London, Madrid, Paris and Vienna, in addition to New York, Washington, The Angels, Vancouver, Toronto, Central and South America, Middle East and Asia. Also regularly participates in prestigious festivals such as Lockenhaus, Montpellier, Ottawa, Oleg-Kagan, Schleswig-Holstein, George Enescu in Bucharest and the Salzburg Festival. His numerous and multiplatinum albums (Critics Prize of the German Disco, nominaciones al International Classical Music Award, etc.) demonstrate the exceptional quality of the whole and its wide repertoire. His complete recording of Shostakovich String Quartets, and their record productions with works by Schubert and Schumann, They have been considered by critics as interpretations of reference. They are currently carrying out comprehensive recording of the Quintet and Sextet Johannes Brahms string. El festival Hambach Music Festival, founded by the Quartet in Mandelring 1997, It is a meeting point where every year lovers of chamber music gather from around the world. The quartet performs cycles own concert at the Berlin Philharmonic, Residence in Munich and in his hometown of Neustadt an der Weinstraße. He has played on numerous occasions the complete cycle of Shostakovich quartets fifteen, among others in Berlin and at the Salzburg Festival.

Born in Murcia 1983, Joaquín Riquelme He began his studies at the Conservatory of Murcia with Pedro Navarro and Antonio J. clear. He studied at the Higher Grade Madrid Royal Conservatory (RCSMM) Emilio Mateu and Alan Kovacs, finishing with honors. Continue their education, Konzertexamen conducting studies at the University of the Arts (UdK) Berlin with Professor Hartmut Rohde and finishing with the highest ratings. He has made improvement classes with Hartmut Rohde, Bruno Giuranna, Ashan Pillai, Jesse Levine, Jean Sulem and other leading viola players. Since February 2010 He is a full member of the Berlin Philharmonic Orchestra, with which he has performed in the best clubs and festivals around the world, acting under the baton of conductors such as Sir Simon Rattle, Claudio Abbado, Maris Jansons y Daniel Barenboim, among others. Previously he joined as Assistant Soloist Symphony Orchestra Ciudad de Barcelona i Nacional de Catalunya. Very active in chamber music, He has collaborated with musicians from the likes of Emmanuel Pahud, Daishin Kashimoto, Christian Zacharias, Jörg Widmann y Hartmut Rohde, with various chamber groups as the Ensemble Berlin, Philharmonic Octet, Landsberg Summer Academy, etc. He has also participated in chamber music festivals as the Schwetzingen Festival, Festival “Music Emperi” in Salon de Provence and the Crescendo Festival In UdK Berlin, in prestigious concert halls such as the KKL Luzern, Konzerthaus Vienna and Munich Herkulessaal.

Founded in season 1993/1994 and debuting at 1996, Israeli musicians who make up the Jerusalem Quartet They embarked on a study tour and maturation that has resulted in a wide repertoire and an impressive depth of expression: a trip still motivated by the energy and curiosity with which the group began. The Quartet continues the tradition of string quartets in a unique way. The ensemble has found its own place, sound complete, human, and a balance between the high and low voices, giving you the freedom to refine their interpretations of the classical repertoire works and explore new genres and eras, all seeking perfection of sound. His collaborations with exceptional musicians like András Schiff, Elisabeth Leonskaja, Alexander Melnikov, Tabea Zimmermann, Nobuko Imai, Steven Isserlis, Gary Hoffman, Sharon Kam and Martin Fröst clearly demonstrate how musicians benefit from their work, and each guest becomes an integral part of an indivisible ensemble. Dear guest and regular of the most important concert stages, The ensemble has been particularly well received in North America and Europe, having performed in Tonhalle Zürich, Herkulessaal de Munich, Wigmore Hall in London there Theater Champselysees, as well as Auditorium du Louvre in Paris, Laeiszhalle in Hamburg and festivals such as Schubertiade Schwarzenberg, Verbier Festival, Rheingau Music Festival, Salzburg Festival, Schleswig Holstein Music Festival, White Nights Festival in St. Petersburg and many others. Jerusalem Quartet records exclusively with Harmonia Mundi. His albums of Haydn String Quartets and Death and the Maiden Schubert have won numerous awards such as the Diapason d'Or, Chamber Music Award from BBC Music Magazine and the ECHO Klassik. In 2014, his album of string quartets by Leoš Janáček and Smetana was released with great acceptance of public and critics. A year later published the Quartets op. 18 Beethoven with similar reaction. Last season has focused on three programs: piano quintets Mieczysław Weinberg & András Schiff Sir Johannes Brahms con; “Dvorák Feast” (a series of concert in two parts ranging from trios to string sextet), and the whole cycle Bartók. further, during the season conducted an extensive tour of Australia.