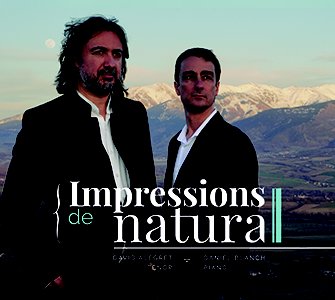 The Palau de la Música Catalana You will receive next 1 June to the tenor David Alegret, a singer with a Mozartian consolidated in the field of international opera career especially in the rossiniano and- and the oratorio, but what, Besides, a lover recital repertoire is declared. In his performance he will have a special role the "Lied" Catalan, a selection of disc contents of Alegret "Impressions of nature" (edited by Columna Música and recorded at the Petit Palau) centered, precisely, in this repertoire and which includes some findings of the pianist Daniel Blanch, performer who accompanies the Catalan tenor at the Palau recital and on the album. Blanch is the president of the Joan Manén Foundation, entity that claims not only the work of this virtuous composer, but also that of other Catalan authors. In addition to the usual pianistic repertoire, Blanch has worked to rescue from oblivion by bringing to record and recovering works, among others, of Manén, Joaquín Nin-Culmell, Xavier Montsalvatge, Carlos Suriñach, Manuel Blancafort O Ricard Lamote de Grignon, of whom some of his pieces for song and piano are included in the album and in the recital together with others by his father, Joan Lamote de Grignon, that stood out for its catalog of cultured songs that reached a hundred works. "Impressions de natura" also includes works by Francesc Montserrat -the name of the album comes from one of its pieces-, Francesc Pujol -whose unpublished scores have been found in the Library of the Palau de la Música Catalana- and the much better known Eduard Toldrà.

After this appointment with the Barcelona public, David Alegret's international career will take him to the Massimo Bellini Theater in Catania (The rose pilgrimage, from Schumann), to the Granada Festival (arias concert of Mozart with the Granada Orchestra conducted by Pablo González), back to the Palau de la Música Catalana (Ninth Symphony of Beethoven and Passion according to Saint John of Bach with the Orquesta Simfònica del Vallès), to the Life Victoria Festival in Barcelona to offer a recital of Lied accompanied by the pianist Albert Guinovart, at the Gran Teatre del Liceu in Barcelona (Romeo you Juliet, from Gounod, directed by Josep Pons), to the Toulon Opera (The Barber of Seville, Rossini) and the Oviedo Opera (The Turkish in Italy, from Rossini).