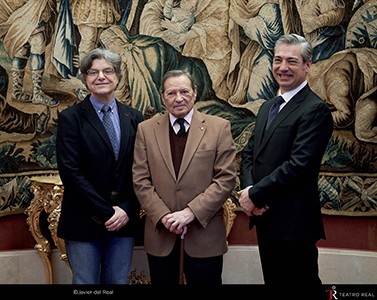 Between days 7 Y 25 of March They will be offered 17 functions Aida, with great production conceived by Hugo de Ana for the opening of the second season of 'new' Teatro Real, in October 1998, which he unveiled to the public the enormous dimensions and exceptional technical capabilities of his new stage.

The 8 then functions, directed by Luis Antonio García Navarro (1941-2001), joined the 353 that occurred in the previous seasons closure theater, in 1925. During that period the popular verdiano title was the most represented in the Real, being Giuseppe Verdi (1813-1901) the favorite composer of the Madrid public.

In this season of commemorations ─los 200 bicentennial year and 20 years of his reapertura─, Royal Theater looks, well, its past and recent history through replacement Aida, this self-joining another symbolic tribute to Pedro Lavirgen (1930). This great tenor could not read in the Real to the characters that distinguished him Radamès ─como, from Aida, with which debuted at La Scala in Milán─ because the height of his brilliant career transcurred during the period when the Coliseum was the Plaza de Oriente concert hall and operas were performed in the neighboring Teatro de la Zarzuela.

With the premiere of Aida in Cairo, in 1871, Giuseppe Verdi, sexagenarian and 25 operas to his credit, apparently he culminated a prolific career (then last until the 80 years), with a very effusive score, but also deep and intimate, in which they emerge the recurring themes in his work: the love triangle, the political and social background, the arrogance of dictators, the humiliation of the oppressed, paternal-filial feelings, jealousy, forbidden love, treachery, loneliness, death…

From the compositional point of view, Aida also it reflects the seniority of Verdi: his mastery of the vocal writing, ─privilegiando duos and set numbers, detriment of arias─; the great use of orchestration for dramaturgical effects; juxtaposing moments of recollection and splendor; and expertise in articulating large choral and solo choreographed numbers inspired melodies, of great encouragement and deep drama.

It is precisely this duality between the spectacular mass scenes ─con the Egyptian empire, armies, pharaohs, slaves, priestesses, invaders, prisoners, Religious rites, celebrations, and those etc.─, collected, outcropping in conflicts and dramas of the protagonists, where the difficulty of staging Aida.

Hugo de Ana opts for a strong symbolic power production, dominated by a colossal pyramid suggests the magnificence of political power and religious, opposed to desert landscapes that emphasize the profound loneliness of the characters, torn between feelings, doubts and contradictions.

For the current replenishment Aida, Hugo de Ana has revised the original production of 1998, updating props and costumes and introducing part of some projections.

Three deals will alternate in interpreting the leading roles of Aida, with Liudmyla Monastyrska, Anna Pirozzi Y Lianna Haroutounian in the title role; Violeta Urmana, Ekaterina Semenchuk Y Daniela Barcellona as Amneris; Gregory customer, Alfred Kim Y Fabio Sartori as Radames; Y Gabriele Viviani, George Gagnidze Y angel Ódena, as Amonasro. shall be assisted by the rest of the cast and the Headlines Choir and Orchestra of the Teatro Real, under the direction of Nicola Luisotti, verdiano governing its third title at the Royal Theater, After his highly praised releases The Troubadour Y Rigoletto.

With almost 300 ─entre solo artists, choir, dancers, orquesta─ actors and scenery and historical and, Aida returns to Madrid between celebrations and tributes, but, especially, Real bringing to the stage of great performers, able to give the work its true universal dimension Verdi.