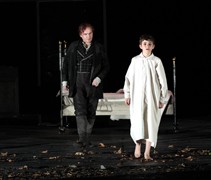 The Turn of the Screw: “I am the hidden life that stretches when the candle goes out”

En The Turn of the Screw (The turn of the Screw) we never know what the murky story that unfolds in a Victorian mansion in England 1840. A story between children and adults, or between children, ghosts and a governess. But ghosts really exist?, Are there for children?, ¿Even the governess?, for both?. All these questions are never clarified (a and). It will be the imagination of the viewer that clearance (or not) the unknowns that masterfully poses Benjamin Britten The twist in.

The musical structure of the work is based on each scene is preceded by a variation on a theme, the outcome, returns to the initial tonality, describing the action during a turn as a nut. Everything revolves around a variation, a tonality that always returns, as everything that is repressed, always returns ...
13 instruments are enough to generate an oppressive and disturbing atmosphere through an incredible variety of sounds. Masterfully, Benjamín Britten, musically develops the phantasmagoric literary work Henry James, adapted for opera Myfanwy Piper.

15 brief scenes requiring a schematic scenery, without major changes. Panels that slide stage with a large window to the background whose light intensity changes and size, They are responsible for making transit through the scenes. But it is certainly lighting, which handles these transitions brilliantly, clarifying every moment, demudando ghosts, a shocking interior or a warm autumn. All contribute to create a Gothic atmosphere and ghostly shadows move where characters and extras.

A remarkable address by Josep Pons, although it could have given more strength to these instruments thirteen why not put aside excellence. Something similar happens with the direction of actors, which he has opted for an excessive restraint when this work requires greater involvement by the characters, more vehemence and strength. To highlight the wardrobe Inglés National Opera. Elegantly simple and very consistent with the scenery and the Victorian era.

The protagonists are children repellents, which, in the case of children on stage, it is to be thankful. These two creatures to the beginning of the work are presented as beatific, two angelic figures and innocent, they discover, as the work progresses, its dark side. See James and Flora transit of innocent children's games to your date night with ghosts, with the same candor, It is chilling to the viewer.
The little innocent children Peter Shafran Y Nazan Fikret get credible character in his innocence and in their wickedness. The shortage of shades of Miles enhances your children's character. Flora boasts a better intonation and voice projection.
Emma Bell vested with authority and tenderness the role of governess. Daniela Sindram, It gives life to the dead Miss Jessel, in an excellent dramatization, makeup and lighting help build a character that imposes. The best of the evening was John Mark Ainsley in his dual role, as prologuista and Quint, ghost of the old house employee. The tenor solves both papers with high solvency, especially the role of ghost.

With so many elements for analysis, Why is it so difficult to resolve doubts raised? Question is not easy for an audience who finds himself overwhelmed in the moment when the curtain makes its appearance. It is from this moment when they start personal reflections, and shows all the symbolism of this work.