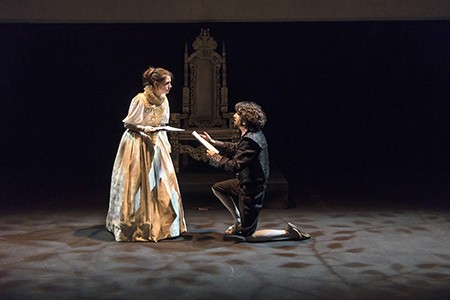 Les Arts and La Farseria co-produced this dramatic reading with scene address Andres Poveda, and adaptation of the text and proposal stage itself and the Poveda Anselmo Alonso, from the translation of 1881 in charge of Josep Yxart.

As they explained Alonso and Poveda, They have compressed 80 minute adaptation of Schiller's text in order expected in a dramatized reading: Fast and clearly show the message:

"That's why we have faced the issues of this 'Don Carlos', with scissors Precision, so that the political idea, The philosophy, the function of love, the idea of ​​the motherland and religion speak in a clear language ", the authors.

Activity, It included in the proposals of the Didactic Program, It has an open session on Saturday, 16 from December, to 18.00 h, in the Aula Magistral inputs to eight euros.

Verdi's opera is the backbone of a wide range of educational proposals. On the one hand, from the day 12 until Saturday morning, arts center offers introductory workshop to the opera 'Don Carlo', organized jointly by the Department of Education of Les Arts and Alzira-Valencia center associated of UNED. In addition to receiving academic training, attendees will witness a "Don Carlo 'function Verdi, in the Main Hall, as well as a representation of the dramatized reading of Schiller's work. Among the various speakers of the course, Jordi Claramonte appear, Professor of Aesthetics and Art Theory at UNED, and Mercedes Jorge Serra, professor of music history at the Conservatory of Music in Valencia.

Likewise, Les Arts has hosted workshops as' book to script, Text on relations Schiller and adaptation to the score of Verdi, and 'The construction opera' in which the smallest discover the production process of this title, that Les Arts offers a Marco Arturo Marelli assembly.