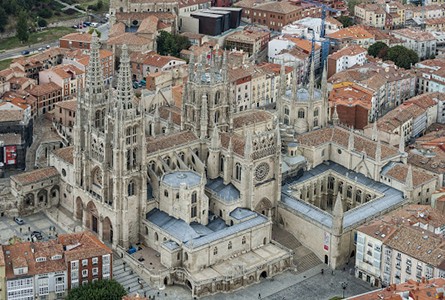 The VIII Centenary of the Cathedral Foundation. Burgos 2021 held this afternoon the meeting of its Board of Trustees in the Seo choir and it approved the cultural and sports programming planned for next year. It is a calendar of high-altitude activities with the aim of reaching all audiences, as 2021 It will be the great year in which the Castilian temple meets 800 years since Bishop Mauricio and Fernando III laid the first stone of the basilica. The initially approved budget is 2,5 millions of euros.

In this program the musical section stands out, with more than twenty concerts planned. A) Yes, the VIII Centenary of the Cathedral will be the magnet that attracts the Venezuelan conductor Gustavo Dudamel to Burgos, the Mexican tenor Javier Camarena or internationally recognized singers such as Raphael, Bunbury, Pablo López e Izal.

Likewise, Burgos corals, choirs, the organs of the Cathedral and other concerts aimed at young people, without forgetting a peasant mass, the OSCyL, the JOSBu and a new agreement with the Albéniz Foundation, will have a leading role in the commemoration of the 800 years of Seo.

In 2021 culture will also make its way through an extensive exhibition program that will show what Burgos was like in 1921, will bring The Ages of Man to the Cathedral of Burgos under the name of ‘Lux’ or it will bring the greatest patrimonial treasures of the Castilian province to the Museum of Santa Cruz de Toledo in ‘Burgos-Toledo. Origins of Spain ’. further, The Evolution Forum will host an exhibition in which Burgos artists will show how they see the Cathedral and another that will deal with the Castilian language and the collection of volumes of ‘Don Quixote’ that the Cathedral Archive guards.

Goya will also stop in the city with ‘The disasters of war’, sponsored by Fundación Ibercaja. And they are studying an exhibition in Sasamón, one of the historic headquarters of the diocese of Burgos, and another in which two geniuses who were contemporaries converge, rivals and crucial in the greatness of the Cathedral: Felipe Bigarny and Diego de Siloé.

Bet on history as a tourist engine

2021 It will be the Jacobean Year and that spirit will be transferred to the streets of Burgos with the creation of a reception office for pilgrims in the vicinity of the Cathedral, the installation in the Plaza del Rey San Fernando of a large plant sculpture in the shape of a pilgrim six meters high and with a special signposting of the Camino de Santiago in fiberglass by the artist Cristino Díez.

On this journey through history, the historical re-enactment of the wedding of Ferdinand III and Beatrice of Swabia and the launch of a network of European cathedrals will stand out..

Activities already consolidated such as "The Cathedral by candlelight" will be kept on the calendar., ‘Dancing with stones’, literary talks, varied colloquia and poetry recitals.