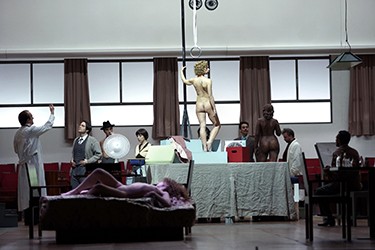 E. T. A. Hoffmann (1776-1822), that writer, composer, orchestra director, tenor and remarkable jurist, He earned his greatest artistic recognition for his role as writer. He was part of the Romantic movement and his works, a disturbing style between humor and terror, They influenced the work of other renowned writers like Allan Poe or Gautier.
They were just some of his stories chosen by the French composer Jacques Offenbach (1819-1880), to be set to music. Specifically three of his stories: "The Sandman", "The counselor Krespel", and "Night Adventures San Silvestre", They served as inspiration for Tales of Hoffmann.
Offenbach died when he had just finished a third of the work, but he left a lot of written music, enough for at the least three more operas. This is the main reason why there are multiple versions exist Stories. According to the director Cambreling, some of the versions that have been made so far are not of the friendly all with the original libretto. For him the work is like a big collage, elements glued together. Parallel stories that have nothing to do, necessarily, each other. With this premise have made this new adaptation of the version of Fritz Oeser. The main effort was to respect the maximum surrealism of the original script. And they have succeeded, I do not know if you respect the libretto, but develop a surrealist work, full of content and disjointed details that make it difficult to follow an argument that it's, per se, devilishly complicated.

He has found inspiration this time Marthaler in the halls of the Fine Arts in Madrid. Place that were quoted by Mortier to begin work on site, as this is a place where different artistic disciplines are intertwined in a chaotic manner suggestively. And this confusion is based on delicate on which is built the collage missed by Cambreling and Marthaler. If the purpose was confusion, the result is excellent.
The play takes place in a unique setting where different areas are reflected in the Fine Arts. Cafeteria, the playroom, the painting room, by parading models to be portrayed and an initial transfer incessant chorus walking onstage and visitors of the Circle. All in the nearly ten initial minutes elapse without music.
Stage, although it loaded with all kinds of distracting elements: singers, extras, props, among other details, It does look decaying, lonely and sad that it is mainly due to the lighting Olaf Winter. This accentuates the tragic background of the work, while they have played almost all the humorous aspects, which they are few in this work, and lightens the underlying drama. Nor they have taken into account important key scenic, as the scene of Olympia, which it has been deprived of his mechanical problems contributed fantasy tale to the scene. The large empty space up, very industrial and very pleased to Marthaler, ends of cooling the environment.

The box singers is balanced and homogeneous. A work as coral (never better said) requires a strong team secondary voices, and in this production this requirement is met.
The first character is involved Anne Sofie von Otter, which is divided between the Musa and Niklausse. It is always a pleasure to hear, although on occasion it is fully covered by the orchestra. His characters are somewhat bland but retains its elegance on stage and a beautiful bell, at this stage of his career, It will be much more interesting performances in operas complete.
Eric Cutler Hoffmann interprets a craven that sometimes seems to wander around the stage. Its emission is uneven throughout the representation, but overall, his character correctly solved. At sharp they lacked intensity, but it was less to more, especially in the second act.
Measha Brueggergosman fronted papers Antonia and Giulietta. He managed to endow each of the characters in the nuances and personality enough to differentiate. He created a deep Antonia and Giulietta sultry. Your records will allow ample voice to obscure the taste and this time there was excess power. Its ability to enhance the expressiveness dramatization characters.

Ana Durlovski It was the most applauded with his devilish Olympia. Although slightly strident timbre, dominates the coloratura of her aria, to which he did not miss a single note. Too bad the playwright Ubenauf decided to strip the character of its elements dreamers.
Vito Priante He struggled with his four villains and good characterizations, credible in all. Her voice is versatile without being too dark. It was diluted as they moved acts.
Jean-Philippe Lafont, Maestro Luther and Crespel, he moved on stage with some difficulty and his voice is almost as tired as he.

Christoph Homberger He solved his four characters very correctly that, because of the lackluster scenery, They were poor and boring.
Spalanzani occurrence that has been played by an actor (Graham Valentine) and not a singer, I could not have been a bad idea if they had not been wandering around the stage without further. An actor badly exploited and wasted an opera singer.
Gerardo López He does not have a great voice but his sharp have a nice metal. Nasality you must correct their midtones.

This has not been the best performance of the choir, It was much better the acting part and strangely enough had to move with their ridiculous characterizations.
Orchestra in the hands of for Drömann It rang with precision and energy. Accelerated at times, Nor it will go down in history Theater.

It was the last opera staged who scheduled Gerard Mortier. It wanted to make his mark, if you can identify and, a través del Person poem (under the name of Alvaro de Campos) "Ultimatum" which recited by Costa Rican Altea Garrido, just he drew attention beyond the weirdness.