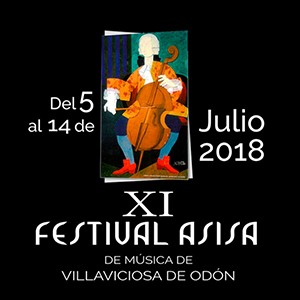 Good music and free concerts for all audiences; That was the goal that was born, more than a decade, the music festival that takes place every summer in the Madrid municipality, thanks to the firm purpose of town hall Villaviciosa and the renowned pianist and artistic director of the festival, mario Prisuelos, architect and coordinator of the proposal. A successful musical initiative, which it was inaugurated in 2008, and it has become a must-attend event of the musical summer in Madrid.

The new edition of ASISA Music Festival Villaviciosa, It is held from 5 al 14 of July, for two consecutive weekends, outdoors and in the usual scenario of the Coliseum Plaza del Peregrino Culture. Artistic Director Mario Prisuelos has opted once again for the high quality of a program that brings together national and international artists premier musical.

The famous accordionist Iñaki Alberdi, performing works by Albéniz, Torres, Soler, Granados, Gubaidulina y Guridi, will open next 5 July the eleventh edition of the Festival. The next day; American pianist of Israeli origin Itay Goren, He will star tribute concert dedicated to French composer Claude Debussy, on the centenary of his death. The duo Pochekin, the duo formed by brothers Ivan and Mikhail Pochekin that, after passing through various European capitals, They present their new CD The unity of opposites with works Haydn, Mozart, Prokofiev there Glière, will close on Saturday 7 of July, the first weekend of this musical event.

He 12 of July, the cellist Asier Polo Bilbao, considered by critics as one of the finest cellists of his generation, will perform the Suites for Cello solo Bach. Juan José Olives and the Chamber Orchestra of the Auditorium of Zaragoza ("Grupo Enigma"- name that is known habitualmente-), will offer the day 13 July a concert with works by Stravinsky and Beethoven. The closing concert will take place on Saturday 14 July with the Trio Bacarisse, that its interpretation of the "porteñas Seasons" by Astor Piazzola and Piano Trio, Violin and Cello No. 1 in D minor Mendelssohn, put the finishing touch to this eleventh edition of a festival that invites us to enjoy good classical music for free and in a different environment.