The Teatro de la Zarzuela proposes a musical journey, suitcase filled with masterpieces of the genre, to put the final icing on 2017. Lyric gala 'plural Zarzuela. Christmas Concert 'poses a festive itinerary Communities of Spain, thus discovering the audience that this genre does not belong to a specific place, but it is as plural as plurals are our peoples and cultures. The appointment will be on Thursday 28 December at 20h00.

The gala will be directed by the teacher Oliver Diaz, musical director of the Theater, and will feature the participation of several of the major voices today, as are those of the mezzosoprano Carol Garcia, baritone José Antonio López, the tenor Enrique Ferrer or soprano Svetla Krasteva. Throughout the concert will also address the immense Lucero Tena, which undoubtedly will dazzle the audience with his magic and unique way to understand the art of castanets. Chorus of Teatro de la Zarzuela and the Community of Madrid Orchestra (Holder Coliseum), and the Lyrical Rondalla de Madrid "Manuel Gil" They will join the celebration. 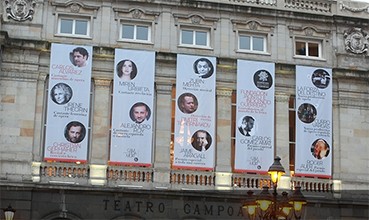 The world of opera is given appointment Oviedo to attend her big night in Campoamor Awards Gala. The ceremony of the most important opera awards Spain will take place on Saturday 19 of March, to 21:00h, in the emblematic theater of the Asturian capital.

baritone Maybe Borja and soprano Silvia Vázquez emcees will be a gala, which this year takes scenic firm Joan Font (comedians), and musical direction Marzio Conti, in front of the orchestra Oviedo Filarmonía and the Polifónica Chapel City of Oviedo.

In this tenth edition of the awards were presented in total 400 candidatures of the national opera season, according Cosme Marina, Foundation director Líricos Awards.

After a hard-fought and intense jury selection, consisting of prominent personalities from music critics, Michel Plasson, He has been named best musical director for Werther from Massenet, Romeo and Juliet from Gounod, Y The Pearl Fishers from Bizet. The stage direction award was for his compatriot Laurent Pelly, by Don Pasquale from Donizetti, Hansel and Gretel from Humperdinck Y Daughter of the Regiment from Donizetti.

the tenor Gregory customer he rose, for the second time, the award for best male opera singer Polijo en Organization from Bellini, Otello in Otello from Verdi, Turiddu in Cavalleria Rusticana from Mascagni, Y Canio in Pagliacci from Leoncavallo; the award in the female category was for the American mezzosoprano Joyce DiDonato by Alcina from Händel. The revelation singer has been Ruth Iniesta by Martha in Honeymoon in Cairo from Francisco Alonso, and for his role as the Soprano in Opera four notes from Tom Johnson. Nicola Beller Carbone It has been awarded as the best performer of Spanish opera or zarzuela Pepita Jiménez, in the opera of the same name Isaac Albeniz, and the leading role of The Grand Duchess of Gerolstein from Offenbach.

The best new opera production was awarded ex aequo in Bluebeard's Castle from Bartók, Opera Oviedo, Y Otello from Verdi, of the Castell de Peralada Festival. The terrible Pérez from Tomas Lopez Torregrosa Y Joaquín Valverde, son, He has received the award for best opera production of zarzuela or Spanish.

The famous Welsh bass-baritone Bryn Terfel He has been awarded the prize in the category for best lyric recital or concert of the season. The famous Italian mezzosoprano Fiorenza Cossotto You will receive a special award for lifetime achievement. And the Special Jury Prize this tenth edition has been for Jerez Villamarta Theater Foundation, also awarded the prize for the best institution that has contributed very significantly to the world of opera.