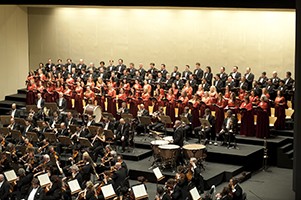 On this occasion, a Lyric Gala will be offered under the orchestral direction of John Axelrod, with choir direction of Íñigo Sampil and the participation of the soloists Maria Jose Montiel, Mariola Cantarero Y Juan Pons.

National Music Award 2015 awarded by the Ministry of Education, Culture and Sports of Spain, magazines like Opera News (USA), Current opera (Spain), Opera Magazine (France), L?Opera (Italy) y Orpheus (Germany) position María José Montiel as one of the great mezzo-sopranos of today, praised for the beauty of its timbre, its interpretive delicacy and communicative power. In 2014 Y 2015 He has played Carmen in Israel and Italy led by Zubin Mehta, a character who has walked through the most important stages of Switzerland, Italy, Germany, France, Spain, Japan, China and United States. Bizet's gypsy woman transformed the Madrid mezzo into an international revelation and her collaborations with Riccardo Chailly in works such as the Requiem in Verdi (Vienna, Frankfurt, Milan, Budapest, Tokyo o Leipzig) have consolidated that unstoppable prestige.

She recently debuted the role of Ulrica in A masked ball in Verdi, in Israel and again with Mehta (July 2015) and the character of Delilah in Samson and Delilah from Saint-Säens, in Mexico (September 2015); has sung the Requiem by Verdi with La VERDI in Milan as part of the events that close the Expo Milano 2015 and has made his debut at the Teatro San Carlo in Naples as the protagonist of Carmen, always under the baton of the Indian director. His next commitments include the absolute premiere of María Moliner by Antoni Parera, at the Teatro de la Zarzuela in Madrid and Scheherazade Ravel, with the Valencia Orchestra.

He was born in Madrid where he studied the singing career at the Royal Conservatory of that city, before moving to Vienna to improve with O. Miljakovic. He is also studying Law at the Autonomous University of Madrid, in which he also obtained the DEA in Music History and Sciences.

Grenadine by birth, begins his musical studies at the Conservatory of his hometown, and later he expanded them with the Cordovan Professor of singing Carlos Hacar and already in his career he perfected with Ruthilde Böesch in Vienna. She is awarded in different international singing competitions such as the “Francisco Viñas”, “Operalia´99”, “Pedro Lavirgen” Y “A.S.L.I.C.O. 2000” and receives different awards for his career such as “Current Opera Award 2002”, “Revaluation of the circle of friends of the Lyceum 2003”, “Image Award of the City of Granada 2003”, “Critical Eye of RNE 2005”, “The Honorable Mention of the Diputación de Granada”,”The Gold Medal of the City of Granada”, as well as “The Gold Medal of Andalusia 2011”.

He makes his debut at the Carlo Felice theater in Genova with Le Comte Ory Rossini, and since then he has become a regular soprano in the main theaters in Europe such as the Teatro Real in Madrid, Barcelona Lyceum, Maestranza of Seville, the Bilbao Opera, May Florentine, San Carlo of Naples, The Opera of Rome, Rossini Opera Festival, as well as at the Hamburg opera, bucharest opera, Berlin, Zurich, Amsterdam, Strasbourg… and beyond our continent at the Korean National Opera, Shanghai Oriental Art center de China, San Juan de Puerto Rico, Santiago de Chile, Sao Paulo Opera House, Detroit Opera, New Jersey…

Recognized around the world as one of the leading dramatic baritones of our time. His most recognized performances include Rigoletto, Tosca, La traviata, The maiden of the west, Gianni Schicchi, Pagliacci, Madama Butterfly, Cavalleria rusticana, etc.

Throughout his career, Juan Pons has sung regularly with the most prestigious operatic companies in the world, for example: La Scala in Milan, the Metropolitan Opera House in New York, the Vienna State Opera, Covent Garden in London, the Bastille Theater in Paris, the Bavarian State Opera, Hamburg and Zurich, Gran Teatre del Liceu, the Teatro de la Zarzuela, Royal Theatre, the operas of Rome and Florence, La Fenice Theater in Venice, the Teatro Comunale Bologna, the Regio Theater of Parma, the Arena of Verona or the Baths of Caracalla, among many others.

You gods (Juan Pons and choir)

The Così fan tutte al High school, which they say is not a Mozartian theater. Since we know very well what is to be or not mozartiano, in the case of a theater, we are left with the doubt. Who does not seem very Mozartian is the stage director of this production, Damiano Michieletto. This young Venetian begins to be known for performing discrete extravagances. Some more successful than others. And it's not this Così fan tutte, that comes from La Fenice, one of his most celebrated productions.

The scenography designed by Michieletto trivializes the plot of Da Ponte. Based on nothing less than works by Bocaccio, Shakespeare Y Cervantes. This is not an opera buffa, but of a dramma giocoso. Or as well defined René Leibowitz, a "tragedy in the form of a game". But the stage manager has created too basic a game this time. He has not been able to see the intelligent proposal of the composer, so given to the game and fun. He has set the plot in a decaying hotel in 5 stars of which you have traced, this time with great success, that dim and daunting light that always invites you to leave the room.

Nor is it right when placing small parallel plots on stage that all they do is distract from the main plot and the action of the singers..

From the pit, the start of the work is promising. It is Mozart! the overture, always vigorous, fills everything. But after the first bars, the lack of spirit begins to show. That spirit that the composer, master of the game of infidelity, so aptly reflected. There is no orchestral line, a musical narration of history.
Pons doesn't pay enough attention to the singers or the chorus. The result is the helplessness of the interpreters and the disconnection between the pit and the stage. Especially in group arias, so important in this work. Untimely tickets and little coordination between singers. The masterful game of entanglements and exchanges proposed by Mozart in his score is absent. In the second act, you go from lack of spirit to boredom. The bad resolution of the end, that is halfway between joy and love disaster, does not fast to leave a good taste in the mouth among the public.

A Juliane Banse he had to play one of the most complete and complex roles written by Mozart, Fiordiligi. A soprano is required driven by agility, with a robust voice to approach arias such as For pity. Juliane Banse has a good central record, but suffered in the lower notes. It also had its difficulties in the complicated Like Scoglio. Aria with great technical demands for which she did not have enough encouragement or support. It was less to more, reaching the second act with a less strident and tighter sound.
Dorabella, Fiordiligi's vocal counterpoint, was interpreted by Maite Beaumont. A much more balanced and homogeneous voice. Nice timbre and good singing line. She was covered several times by her artistic sister, but it gave the character the right character, more shy and demure.

Despina was played by Sabina Puértolas. A soprano with higher tones than the previous ones. He animated the scene with his impudence, exaggerated sometimes, but it gave freshness to the whole work. Broad and expressive voice. She walked the stage while her companions remained static.

The pleasant surprise of the night was the young tenor Joel Prieto, playing Ferrando. His full lyric tessitura, they try hard, is the most suitable for this Mozartian role. He sang with remarkable taste, especially its main aria, Loving aura, who approached with finesse. Cavatina solved very well Betrayed, mocked, theatrically more demanding and for which good bass is required. Very good in the duet with Fiordiligi in the second act. Given his youth and the quality of his instrument, a brilliant evolution is guessed.

Joan Martin-Royo composed a solid Guglielmo. Its baritonal tessitura is reinforced with good bass, that correspond to the character that Mozart described. His acting work was meritorious and shone in the arias. Like the rest of the interpreters, the costumes and the scenery did not favor them too much.

A Pietro Spagnoli They commissioned him a Don Alfonso somewhat rough and with little spark, when what the character requires is an almost buffa. Vocally it was very well resolved by Spagnoli. A magnificent phrasing and a very good declamation in the recitatives. Your tables are noticeable.

The Liceu choir sounded great, Hand Conxita García, despite the shortage of items.

A Così fan tutte something poor and uneven the one that the Liceu has presented on this occasion. Can be improved in any case, but always extraordinary when it comes to Mozart. Let's not think that the Liceu is not Mozartian. Let's give it another chance.