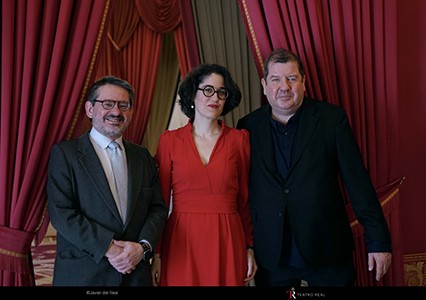 They offer 8 functions of the opera, between 17 and the 27 of March, in a new production of Teatro Real, reaffirming its commitment to recovery of the Spanish operatic heritage.

Achilles in Skyros It premiered at the Coliseum in the Buen Retiro in Madrid 1744 to celebrate the marriage of the Infanta María Teresa Rafaela of Spain, daughter of Philip V, the Dauphin Louis de France, son of Louis XV.

In his staging of the opera, Mariame Clement -That he directed before Plataea, Rameau, written to celebrate the same wedding- recreates the premiere of Achilles in Skyros in Madrid through the Spanish Infanta, acquires a great dramaturgical role in production.

The scenery and costumes of Julia Hansen They evoke the freedom and fantasy of the Baroque and the dreamy atmosphere of the mythological universe.

The original score of the opera, conserved in the Conde Duque de Madrid Municipal Historical Library, was recovered by the Complutense Institute of Musical Sciences (ICCMU), in modern edition by the musicologist Alvaro Torrente.

Achilles in Skyros will be broadcast live by ARTE TV he 27 of March, to 20.00 hours, in an audiovisual co-production by François Roussillon, Arte TV, Mezzo y RTVE. Later the production will be edited on DVD and will be available in the catalog of My Opera Player, audiovisual platform of the Teatro Real.

He 25 March at 20.00 hours the opera will be broadcast on a delayed basis for EBU countries, European Broadcasting Union, and the 28 of March, to 20.00 hours, for all of Spain by Classical Radio, the RNE.

Coinciding with the opera performances, Royal Theater will host, of the 25 al 27 of March, he International Congress of Musicology Words of Metastasio, which will bring together international philologists and musicologists who are experts in the legacy of the librettist.

Functions Achilles in Skyros are sponsored by the Board of Friends of the Teatro Real.

In eighteenth-century Europe, religious wars had given way to purely territorial disputes, with constant treaties, alliances and pacts, many of them sealed with royal marriages. In this context, the wedding of the Infanta María Teresa Rafaela of Spain ─daughter of Felipe V and Isabel de Farnesio─ with the dolphin Luis de Francia is framed, son of Louis XV, which was held by proxy in Madrid, he 18 December 1744, and in person at Versailles, he 23 February 1745, and with which it was intended to appease the tense relations between both countries.

To celebrate the marriage of the future kings of France - who would not finally reign due to the premature death of both - two works were premiered: Achilles in Skyros (Achilles in Skyros), from Francesco Brusa he 8 December 1744, in the Coliseum of the Buen Retiro Palace in Madrid, opening the wedding festivities, in the presence of the infanta and the kings of Spain, before the girl left for France; Y Plataea (Street), from Jean-Philippe Rameau, presented at the Grand Écurie de Versailles one month after the link to the French royal family.

One year after the splendor of this wedding, The Spanish Infanta died in Paris as a result of the delivery of a girl who would die at 2 years. The dolphin of France would almost outlive him 20 years, with his second wife, although he died of tuberculosis before coming to reign.

Achilles in Skyros will be seen for the second time in Madrid, 275 years after its premiere, but today we know that the marriage that was held did not have the happy ending that crowns the opera.

Francesco Brusa, native of Piacenza and son of Charles Courcelle, French dance teacher of Isabel de Farnesio in Parma, trained and consecrated as a composer in Parma and Venice, where he premiered his first two operas. In 1733 came to Spain, years later, serving as master of the Royal Chapel for four decades. His notorious Italian influence on court life was reinforced by the presence of the famous castrato Farinelli (1705-1782), exalted singer and musical adviser of the kings throughout the more than 20 years that resided in Madrid.

Corselli's production, with a remarkable catalog of mostly religious works, accompanies the evolution of the European musical baroque of the mid-18th century, already late and sober, until connecting with classicism. Of his six well-known operas, two have, as Achilles in Skyros, libretto Pietro Metastasio (1698-1782), great friend of Farinelli what, according to musicologist Álvaro Torrente, would have intervened in the contacts with the librettist, the selection of performers and other details relating to the production of the opera.

Pietro Metastasio wrote 27 opera librettos on which they were composed about 900 sheet music throughout the 18th century. The one of Achilles in Skyros was written in 1736, in just 18 days, to celebrate the marriage of Maria Teresa of Austria, with music by the composer Antonio Caldara. The same script would be used in other 38 operas, almost all, as the de Francesco Corselli, falls into oblivion.

In brackets, the tessitura of the interpreters in the production of the Teatro Real.

The opera narrates the juicy episode in the life of Achilles (Achile, countertenor, soprano tessitura), in which his mother, Aunt, decides to send him to the island of Skyros to prevent the brave and impulsive young man from participating in the Trojan war, where, according to the oracle, he will lose his life.

In the middle of these hilarious tangles, whose sexual ambiguity is accentuated by tessitura, also transvestites, Singers, the mighty Ulysses arrives on the island (Ulisse, countertenor, mezzo-soprano tessitura), already warned of the situation and determined to rescue Achilles to lead the Greek army. Knowing his warlike and untimely momentum, use all tricks to seduce him: delivers an eloquent speech in which he appeals to the heroic defense of Greece, offers gifts to the king's daughters by hiding a sword for Achilles and simulates a fake attack on the awakening island, Finally, the verve of the future hero of the epic.

From that moment on the opera acquires its epic character of opera seria and Achilles leaves the youthful fervor and is debated, until the end of the work, with the great ethical questions that underlie the myth:

─ A short life with glory or long without it?

─ Blessed love or striving for an ideal?

─ Immortality in Eden or heroic death as a man?

The new production of the Teatro Real

The stage director Mariame Clement inquires about these and other issues in his original dramaturgy, presenting Achilles in Skyros to the real Infanta María Teresa Rafaela as a kind of "sentimental education", in which the characters and the successive scenes of the opera will make you reflect on your feelings, the pleasures, the ideals, homework, The doubts, fears and attributes of man and woman.

With the complicity of the set designer and costume designer Julia Hansen, who do you work with regularly, Clement places the plot of the opera in an "enchanted grotto" of rococo perfume, evoking the false ruins of eighteenth-century gardens; or the female belly, curvy and lustful of a protective mother; or the rock of an imaginary island. There lives Achilles in disguise, beardless and playful, in equal circumstances with women, and from there he will come out mature and ready to fight for his people, invested with masculinity and heroism, willing to leave his beloved after the happy wedding that concludes the opera. A path of initiation and birth of a hero and a journey of the 18th century opera from sexual freedom, abstraction and enjoyment of the primeval Baroque to gender conventions to be imposed in the following centuries.