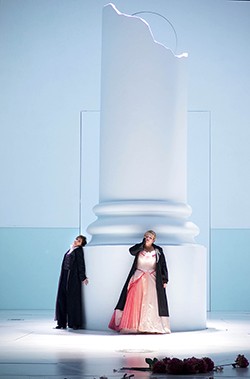 “Turn away from our life everything that is not love ...”, They sing a duet Annio Y Servilia one of the most romantic moments of this opera. And so in love must be to venture successfully into the ice escenográfico proposed Ursel y Karl-Eenst-Rousset in its proposal last opera composed by Mozart written for the coronation pomp of Leopold II as King of Bohemia.

Time passes for this production was a success at its premiere, back in 1982. He had already aged when it came to this same theater 2012, and he has now aged further. Still it looks like the waiting room of a nursing home in the former Soviet Union, as we in 2012.

A scenic box of a brightly lit white that did not allow viewers stalls read subtitles, ended up getting bored and cooling, not only the public, singers also about those who found it difficult to keep up with the work. Partly because of the contagion scenario Arctic, and partly by the eternal silence to make minimal changes scenic Rome, one of the protagonists of the libretto, hardly suggests the appearance of a column. Not bad intention of stage directors wanting to emphasize the psychological aspects of the characters enhancing the absence of elements on stage, but it was not necessary to reach both.

Recitatives become routine when there is nothing in what support, visually or scenically. Luckily permanently Mozart came to the rescue of all, public and singers, They are immediately comforted by the music genius.

The musical direction Christophe Rousset, good knowledge of this repertoire and expert harpsichordist, He was becoming slow after a good overture. recitatives, Rousset itself accompanied by the fortepiano, They proved poor, if we consider his virtuosity, and they made eternal. Especially in the second part somewhat tedious.

No doubt the vocal ensemble of this production improves of 2012. Bernard Richter It is a lyric tenor with a good voice volume and enough agility to build a Tito solved. Its midrange and treble are powerful and bright. More difficulties had with the serious and the tempi of the recitatives.

Canary Yolanda Auyanet He was splendid in his role as Vitellia. A voice that is maturing with high quality. Clean and without artifice. Good phrasing that ran nimbly his particella. But he shone even more in the interpretive part. He put the spark and intent on stage desangelado.

He also shone pamplonesa Maite Beaumont as Sesto. He went that extra mile to make your voice heard. Best in proscenium.

Anna Palimina, born in Moldova, it unfolded very well in the role of Servilia. The penalty was the clothing that put him, especially shoes.

Another pleasant surprise of the evening was the Canadian mezzosoprano Sophie Harmsen as Annio. light and beautiful voice timbre. His sharp could well put him through soprano.

The Italian baritone Guido Loconsolo It has a good stage presence, but Publius felt very uncomfortable out of the worst records. As to the rest, slow and boring recitatives were more a problem than a relief.

The Holder of the Royal Theatre Choir as always, magnificent. participation as rain in May was expected to break the routine scenography.

A replacement has served to pay tribute to Gerar remembered Mortier, who commissioned this production. Outside this commemoration, this Clemenza not give much more.