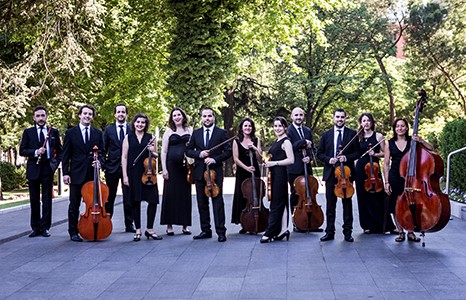 Closing his concerts this fall, The Orquesta Barroca Spain, directed Alejandro Marías, debuts 15 December in the Symphony Hall of the National Auditorium with Handel's Messiah. They will perform with the choir of the Polytechnic University of Madrid and its principal conductor, Javier Corcuera, as well as soloists Sonia de Munck, soprano, Marta Infante, alto, Diego Neira, tenor, y Christopher Robertson, baritone. "Our debut at the Auditorio Nacional has been slow in coming, but certainly the wait is worth it ", says Alejandro Marías, who also says that "it is a big step that UPM has wanted to have a specialized orchestra like ours for this concert; in other European countries it would be unusual to hear music of Handel or Bach played by modern orchestras, but Spain still remains prevalent ". For this concert, Baroque orchestra La Spagna will employ extensive including many of the best musicians of our country historicistas.

The formation of ancient music La Spagna, founded and directed by Alejandro Marías 2009, It is one of the early music groups that have most excelled in recent years. With very different provisions, from a small group of chamber to orchestral and operatic productions with guest conductors, the original instruments or copies set plays adapted to every age and style, as well as a historical interpretive criteria that approach to music as it was conceived by its authors. Spain, GEMA award for the best young group of ancient music, He has published recently A Tribute to Telemann, A case of orchestral music that has received unanimous praise from international critics.

The Spagna complete this concert agenda this fall among those who are counted, among others, concert commemorating the 350th anniversary of François Couperin in the XI West Coast Early Music Festival in Portugal and the premiere, he 2 from December, the unedited version of Francisco Asenjo Barbieri of the Seven Words, Haydn. Spain, along with Rafael Torres Ruibérriz, flauta travesera, interpret, for the first time in modern times this version for flute and string quartet unknown until today, precisely the same scenario where the original play opened, the Oratorio de la Santa Cueva, in the Spanish Music Festival of Cadiz.

Alejandro Marías (Madrid, 1984) He is professor of viola da gamba of the Conservatorio Superior de Sevilla, artistic director of Spain, Goya Quartet cellist and regular contributor to groups like Zarabanda or Form Antiqva. He has given concerts in twenty countries and recorded for labels such as Brilliant, Warner o Winter&Winter, at the time it develops a work as a researcher, lecturer and essayist.