Tag: The Marriage of Figaro 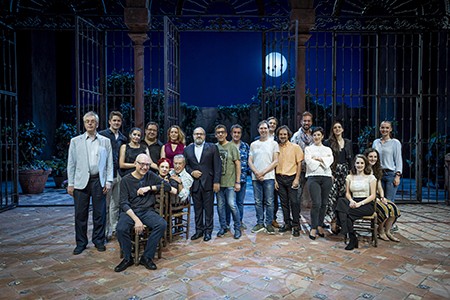 The Palace of Arts opens on Friday, 27 of September, the season 2019-2020 with the premiere in the Main Hall of 'The Marriage of Figaro', Mozart.

The artistic director of the Arts, Jesus Iglesias Noriega, He has presented at a press conference this show with his musical director, the British Christopher Moulds, as well as Emilio Sagi, architect of the staging.

"Mozart is an essential for any theater composer with an international vocation and so will be at Les Arts from this season, in which we can already hear an unreleased title for our audience, as 'The giardiniera feinting', next November ", Iglesias noted Noriega. "It is also an indispensable author in our commitment to the formation of new audiences. Therefore, 'Le nozze di Figaro' is one of the titles that Les Arts has programmed with popular prices, between 18 Y 60 euros, but with the same artistic level as the rest of the proposals of the season ", It noted.

Christopher Moulds, internationally recognized for his work in the Baroque and Classical music, debuts with Heart of the Government and the Orquestra de la Comunitat Valenciana.

British teacher, who has had words of praise for the stable bodies of the theater, has worked from the perspective of chamber music to extract a more classical sound from the OCV, ‘A formation of romantic customs’, as you have pointed out.

Emilio Sagi signs the staging of ‘Le nozze di Figaro’, which is a co-production of the Teatro Real de Madrid with the Asociación Bilbaína de Amigos de la Ópera (ABAO) and the National Theater of Opera and Ballet of Lithuania, with scenery by Daniel Bianco, Renata Schussheim's wardrobe, Eduardo Bravo lighting and choreography by Nuria Castejon.

Essential figure in the history of Les Arts, where he has presented productions such as ‘The witch’, 'The king who raged', The duo 'The African' ', ‘Katiuska’, 'Luisa Fernanda', 'Lucrezia Borgia', ‘Tancredi’, 'The world of the moon' or 'Rigoletto', Sagi faithfully reproduces the sensuality of the city of Seville in the mid-18th century.

The director from Oviedo, which considers ‘Le nozze di Figaro’ as a theatrically perfect piece in which there is room for alterations, raises a ‘hyperrealistic’ Mozart, exaggerating the Spanish character of the argument, with items such as Schussheim's wardrobe, clearly Goyesco cut.

Les Arts brings together recognized voices from the Mozart repertoire in this cast, with two of the most international Spanish sopranos, María José Moreno and Sabina Puértolas, in the roles of Countess of Almaviva and Susanna, respectively. Likewise, arts center features Canadian baritone Robert Gleadow, acclaimed by the public and critics as the new reference performer in the role of Figaro.

'The Marriage of Figaro'

‘Le nozze di Figaro’ is a comic opera in four acts with a libretto in Italian by Lorenzo Da Ponte, which was based on the work of Pierre Augustin Caron de Beaumarchais, "Figaro's wedding".

With this title begins the so-called Mozart-Da Ponte trilogy, which arises as a result of the collaboration of the Salzburg composer with the successful librettist from Treviso, Lorenzo Da Ponte, and to which ‘Don Giovanni’ and ‘Così fan tutte’ belong.

Set in the second half of the 18th century, in the residence of a Spanish nobleman in the fields of Seville, ‘Le nozze di Figaro’ stages the moral conflict around the feudal law of pernada. Background, a fresco of daily life in which serfs evolve, the bourgeois and the lords to the sound of the final mockery of the archaic laws that the lords still enjoy.

The work is considered a song in favor of a new social order in which the gift of intelligence owes nothing to money and the cradle, and the value of the manufacturing classes frivolous ineffectiveness of the ruling classes and passive contrasts. Its premiere took place on 1 May 1786 in Vienna, Three years after the outbreak of the French Revolution.