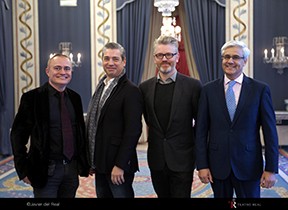 The Royal Theatre will premiere next monday, 30 of November, the opera Rigoletto, from Giuseppe Verdi, one of the titles represented by the Italian composer, of which will be offered 16 functions in a production from the Royal Opera House de Londres, which it has already been replenished several times with great success.

The opera, with a dramatic structure incontestably force, is based on the work of Victor Hugo The king is having fun, in which the story of a cynical and immoral king is told, inspired by Francis I of France, but that is actually a reflection on the inhumanity of man with man, corruption of innocence and abuse of power.

David McVicar, responsible for the staging, designs an intense and oppressive atmosphere that explores the character's ambivalence, full of conflicting and violent emotions, and at the same time turns the work into a cry of rage against injustice. His version highlights the cruelty and degeneracy at the heart of the court of the Duke of Mantua, where the rich courtiers contrast, mired in degeneration, and the miserable hovel in which Rigoletto lives, shown in a circular scenery that rotates discovering both sides of reality.

Teacher Nicola Luisotti, great expert in voices, He will be in charge of the Titulares Choir and Orchestra of the Royal Theater and of three casts led by one of the most outstanding historical interpreters of the jester, Leo Nucci, whose first appearance in an opera title on this stage took place in June 2009, giving life to Rigoletto and in which he starred in the first encore in the recent history of the Teatro Real.

Various and interesting parallel activities have been programmed around Rigoletto's performances, including lectures, film screenings and exhibitions. A) Yes, the National Film Library, Cine Doré, will screen the film version of Rigoletto made by Jean-Pierre Ponnelle in 1982, in the original places mentioned in the play and starring Luciano Pavarotti, Ingvar Wixell Y Edita Gruberova in the lead roles. And the Museum of Romanticism continues its collaboration with the Royal Theater by exhibiting two of the costumes belonging to the production that is represented on our stage during the month of December.