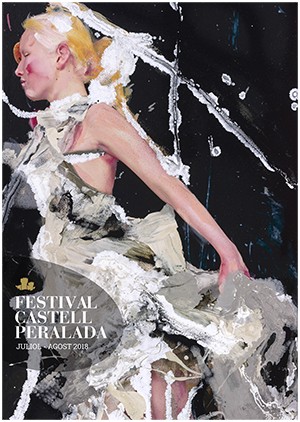 Theater director Oriol Broggi will debut in the field of opera directing a new assembly The magic Flute Mozart, new festival production ampurdanés, in an edition with great operatic content where, plus four operas, the singers Javier Camarena, Jonas Kaufmann Y Placido Domingo they will be the protagonists of an exceptional lyrical weekend.

The Foil choreographer Mourad Merzouki will close an issue that will host Giselle of the Ballet du Capitole in Toulouse with version Belarb of Fate, Flemish poetry María Pagés and the great goddess of dance, svetlana Zakharova.

the countertenor Xavier Sabata is the resident artist an issue where Händel and the Baroque become one of the leitmotivs Festival.

During the ceremony, It has presented the poster of a new edition of the Festival which hosts 22 proposals to hold between 6 July and 17 of August and it has a budget of 4,4 millions of euros. It has also presented the paintings to the Spanish multidisciplinary artist Lita Cabelludo, Internationally recognized as one of the most desirable female artists of the moment, He created for the occasion. The most emotional moment has come when Isabel Suqué has announced the creation of Carmen Mateu Award for music and dance that next summer will be presented at the Festival.

A festival with project and identity

"Para ti". It defines the Peralada Festival director, Oriol Aguilà. A unique cultural event, with a strong identity and summer after summer dedicated to the public. After presenting all the Festival poster leaves no doubt: opera and dance are its essence and raison d'être.

True to himself, will open the 32nd edition one Requiem in Verdi which will be Barcelona Symphony and Catalonia National Orchestra under the baton of Giampaolo Bisanti. The voices of Coro Intermezzo and soloists Leah Crocetto, Ekaterina Gubanova, Charles Castronovo Y Alexander Vinogradov They sing to the memory of Carmen Mateu, alma mater the musical event. Night 27 July begins the week of lyric tenor with a recital Javier Camarena in the church of Carmen. Followed the next day a concert with tenor most quoted of the moment, the German Jonas Kaufmann, returning to the Festival accompanied for the occasion with the Choir and Orchestra of the Teatro Real in Madrid. He 29 July put the icing on the weekend there was a concert version of the opera Thaïs starring Placido Domingo Y Jaho Ermonela in key roles, and stable bases Teatro Real second night at the Festival. Josep Bros will celebrate its silver anniversary with a special unique program for Peralada. He 5 of August, Xavier Sabata will star Rinaldo, the famous opera by Händel, version 1731, It is arriving for the first time in concert Festival. the countertenor, resident artist Peralada Festival 2018, sing along with Nuria Rial, Hillary Summers, Mary-Ellen Nesi, Juan Sancho, Josep Ramon Oliver with musical interpretation Evenings Arnadí under the direction of Dani Espasa.

One of the highlights of the summer will be undoubtedly the debut of theater director Oriol Broggi in the field of opera with a new production of the Festival. Broggi direct the opera of his life, The magic Flute Mozart with musical direction Josep Pons and participation Symphony Orchestra and Chorus of the Gran Teatre del Liceu. An international cast headed by Adrian Ërod, Liparit Avetisyan, Olga Kulchynska y Kathryn Lewek which also features the participation of Anaïs Constans, Castell de Peralada Festival Award Competition Viñas 2017. The opera Acis and Galatea, Handel also young stage direction Rafael R. Villalobos, will end, he 8 August in the cloister of Carmen, the lyrical section with a new premiere brand Peralada, with Evenings Arnadí under the baton of Fausto Nardi with voices Roger Padullés, Lucia Martin-Carton, Victor Sordo, Hugo Bolívar Y Josep Ramon Olive.

The dance will shine again in Peralada with names. He 13 july Ballet du Capitole in Toulouse, under the direction of Belarb of Fate, in Spain will present a new Giselle. María Pagés will present in Catalonia An ode to time he 20 of July. The great svetlana Zakharova will debut in Spain with stars of the Bolshoi the show love he 13 of August. It will close the Festival Foil, such original proposal as risky choreographer Mourad Merzouki. A multidisciplinary dance, hip-hop and baroque music that aims to open the Festival to new audiences.

Musical Summer in international accent will Rufus Wainwright (7 of July), Carla Bruni (21 of July), Santana (11 of August) and the formation disco-funk Kool & The Gang (15 of August). Serrat, the artist who more times has acted on stage in Peralada, will start his tour in Catalonia Mediterranean Da Capo he 6 of July, and the 9 of August, tandem Silvia Pérez Cruz & Marco Mezquida present work scoop whole.

This summer two new scenarios are opening to offer cultural experiences with new formats. He 12 of July, Finca Malaveïna (Garriguella) will host an evening with viticulture and jazz a dream place with Ignasi Terraza Trio. To mark the twenty-fifth anniversary of the Golf Peralada, one of the spectacular terraces of the Hotel Peralada Wine Spa & Golf becomes the perfect setting to enjoy an evening of cabaret;

Peter and the Wolf with Brodas Bros is Petit Peralada's proposal this year. Peralada reaches the hand Orquesta Sinfónica del Vallès, in collaboration with SonarKids. Classical music, hip-hop, urban culture and literature in a fresh and familiar proposal. One more year, as a thank you to the town of Peralada has organized a free concert in the main square by Arnadí evenings and Dani Sword they perform Water Music and the Royal Fireworks Handel.

Alzheimers night at the Festival of Peralada. Continuity charity project

Foundation Castell de Peralada, within its corporate responsibility policy, will collaborate again in organizing Night Alzheimers benefit of the ACE Foundation, private entity dedicated to the diagnosis, the treatment, research and support for people with Alzheimer's disease and other dementias, night 20 of July.

Mediterranean cuisine in the heart of Emporda

The cuisine of the Castell de Peralada Festival will be one of the best this year, because obtaining the Michelin star by the Peralada Castle Restaurant, which it is a challenge and a responsibility for Xavier Sagristà, Toni Gerez and his team, that for this edition of the Festival have designed a range of haute cuisine that reinterprets the culinary tradition of creative and avant-garde proposals.

The offer is complemented by the Restaurant La Parrilla, outdoor buffet where you can taste before or after the show specialties with live music. And this year as well as novelty Blue & Rose Festival, a space to enjoy the best tapas paired with wines and champagnes Perelada. And outside the castle grounds, he Restaurante l'Olivera, Mediterranean cuisine at Hotel Peralada Wine Spa & Golf.

Bus service from Barcelona to Peralada

In order to ensure a smooth and comfortable ride to the grounds of Castle Peralada, for the fourth consecutive year there will be a festival bus service. Days with performance at the Auditorio Parque del Castillo will come a bus from Barcelona towards Peralada.

12/08_ bis, an evening of cabaret with Xavier Sabata

14/08_ Peter and the Wolf with Brodas Bros and OSV