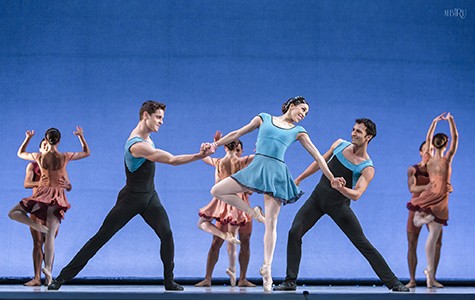 He Teatro Real receive the National Dance Company, for the first time under the direction of Joaquín de Luz since he assumed office in 2019, of which four functions will be offered on days 19, 20 Y 21 of November, the latter in double session at 17.00 and to the 21.00 hours, with a program that includes two unpublished works in this scenario: Apollo, by George Balanchine, Y DSCH concert, de Alexei Ratmanski, next to one already classic by Nacho Duato, White Darkness.

Three choreographies with three great composers as protagonists: Igor Stravisnky, Dmitri Shostakóvich y Karl Jenkins, interpreted by the Head of the Royal Theatre Orchestra under the direction of teacher Manuel Coves, with special participation of the pianist Luis Fernando Pérez for the choreography DSCH concert.

Premiered by the Diaghilev Russian Ballet in Paris in 1928, Apollo it was the first collaboration between George Balanchine and the Russian composer Igor Stravisnky, obtaining immediate international recognition. The harmony between the two artists leads to a work of simple narration, almost mild, but with a great harmony between form and music, constituting the best exponent of neoclassical language.

The story centers on the figure of Apollo, Greek god of music and his encounter with three Muses whom he accompanies to Parnassus: Terpsícore, muse of dance and song; Polimnia, muse of mime; y Caliope, muse of poetry. Day function 20 will have the participation of Sergio Bernal, as guest dancer, giving life to Apollo.

When Alexei Ratmanski premiered DSCH concert, with the New York City Ballet, had Joaquin de Luz Y Gonzalo garcia as lead dancers. The next 19 of November, at the Theatre Royal, both will share the stage again to convey the emotion, energy and drama of Piano Concerto No. 2 of Shostakovich through the language of Ratmanski, that combines in a continuous discourse the contrasts of the score, from exaltation to serenity, from vitality to melancholy, from martial notes to almost poetic intimacy.

Gonzalo garcia, guest principal dancer, will also play the role of Apollo on the day 21 in the function of 21.00 hours.

In White Darkness, last choreography of the program, Nacho Duato pushes us to reflect on the world of drugs, its darkness, the individual and social consequences, the destruction and darkness they lead to. The music of Karl Jenkins (Adiemus variations, String Quartet No. 2), the scenery by Jaffar Chalabbi and the lighting by Joop Caboort accentuate the heartbreaking character of a story whose ending we know, we suffer, towards which we walk, accompanying that path without escape through which the dancer travels.

Consecrated almost from its premiere, White Darkness is, possibly, one of the best creations of the Spanish choreographer.

Is, definitely, a program of great moments. Three different languages ​​for a common word, dance.