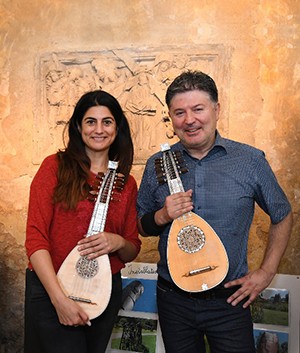 Although authors such as the abbe Ranieri Capponi, Niccolò Susier, Nicola Romaldi, Giovanni Pietro Sesto of Trento or Francesco Piccone at present they are not as well known by the general public as Vivaldi, Bach o Handel, his work is worth rescuing from oblivion as it is authentic jewels of the Baroque. Is what they have done Juan Carlos Muñoz and Mari Fe Pavón, founding members of the famous Artemandoline group that, with its original instruments, They have been giving new life to the repertoire of the baroque mandolin in all its expressions. In Italian Baroque Mandolin Sonatas, his new album, both review masterpieces of the aforementioned composers contributing, Besides, first world recordings of five works never before released on CD.

The repertoire of the album, product of years of musicological research, belongs to a very fertile period in the history of the instrument and the sonata form. At the time of the Baroque, the mandolin was in full swing and many musicians were interested in exploring the new means of expression that they offered., consolidating a great aesthetic refinement thanks to the full development of the interpretive technique.

The Italian sonata, that reaches its peak in this period, it is the form that predominates in an album that takes place between the seventeenth and eighteenth centuries focused on creators who turned out to be authentic precursors of both form and interpretive technique. “As we approached the mandolin sonatas in this recording, we were immediately seduced by their high quality of writing., its variety and its joyous side ", says Juan Carlos Muñoz. The sonatas are lively and infused with contrasting movements, marked by changes of character and tempo ".

These are compositions of great freedom in the structure, "Aspect that, as interpreters, it also leaves us very free in interpretation ", Mari Fe Pavón points out. “The frequent use of ostinato bass patterns allows a more creative way of playing that highlights in the performance the search for colors as a mode of expression. In relation to the possibilities of articulation, changes of tempi and shades, can, in this music, transcribe affections and emotions opening a direct path to the heart of the public ". Juan Carlos Muñoz also points out that “the colors sought are not due to chance, because our goal is that sonatas always win in novelty and freshness. The continuous bass, in this sense, allowed many variations on instruments such as the harpsichord, organ, cello, tiorba, guitar and violone ".

To better understand the tradition of the Italian sonata and identify the stylistic features of the instrumental repertoire, “you have to know how to appreciate the contribution of composers like Capponi, Romaldi, Trento or Susier, too often relegated to the background compared to the composers of that time ", explains Mari Fe Pavón. “These are musicians who with their work contributed to the compositional model of the sonata from the early 18th century, an independent genre in the musical life of the time that became an integral part of courtly entertainment ".

Italian Baroque Mandolin Sonatas proposes an ambitious and fascinating program that walks through the best of the baroque mandolin creation of the time, stopping above all in such important production centers as Florence and Rome.

With his most recent album, Venice’s Fragrance, recorded with soprano Núria Rial, Artemandoline has achieved a nomination for the International Classical Music Awards 2021.