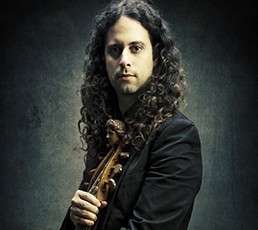 The fourth weekend of Aranjuez Ancient Music Festival aims to awaken all our senses with a program that goes beyond music.

Saturday, 28 of May, we will visit the winery of Carlos III (declared a Historic-Artistic Monument in 1983), that goes more than half a kilometer under the Real Cortijo de San Isidro.

The visit begins in the monumental stone doorway of Colmenar. Next, the two branches of the winery will be visited, flanked by 200 alcoves where they age the wines, until reaching the breeding cave.

In that space, the Seldom Sene female quintet will offer a concert in which we will appreciate near 50 flutes in a mosaic of 500 Years of Music. Once finished, local wines will be tasted, accompanied by an appetizer.

The viola da gamba returns on Sunday, 29 of May, to Chapel of the Royal Palace of Aranjuez, this time, hand in hand with the young brothers Fahmi | Y Rami Alqhai. This instrument was the main protagonist of chamber music during 250 years. His journey began as part of the luggage of the popes Borgia from his native Valencia, to universal Rome, back in the fifteenth century. During those two and a half centuries, the spirit of the viola and its interpreters traveled all over Europe: Tobias Hume in England, Marin Marais Y Antoine Forqueray in France, Y Christoph Schaffrath and the Berlin school in Prussia.

Fahmi Alqhai, considered one of the most important violagambistas in the world, with his brother Rami, are revolutionizing and renewing the historicist music scene with their daring and personal interpretation of early music, at the same time they do a great job of disseminating the viola da gamba among new audiences.

At their concert in Aranjuez they will tour various genres and performers, proving that this wonderful instrument is still alive. They will delight us with themes of Marin Marais and Jimi Hendrix, among others.

Program of the fourth weekend of the Aranjuez Ancient Music Festival:

The visit, about an hour long, begins at the monumental front door. A guide welcomes the public in the French garden to introduce them to the magical world of the history of the winery and its wine. The access from the gardens to the underground gallery is a monumental stone portal of Colmenar, designed by Marquet and built in 1782. At the top of the portal there is a viewpoint from which the kings contemplated the entire plain of Aranjuez. The two branches of the winery flanked by 200 niches, where the wines age.

The concert is held in the underground breeding cave, at the intersection of the two branches. Once finished you will access the winery, vaulted room example of civil architecture from the late 18th century, in which local wines will be tasted, accompanied by an appetizer.

The formation Seldom Sene is composed of Ruth Dyson, Eva Gemeinhardt, Hester Groenleer, Stephanie Brandt Y Maria Martinez Ayerza. Seldom Sene's concerts are quite an experience, both auditory and visual. In a single performance the group used more than 50 flutes of different sizes and models. His programme The country is a mosaic of 500 Years of Music. Through their flutes we will discover pieces of Antonio de Cabezon, Hermann Robert Frenzel, Max Reger, Tomas Luis de Victoria, Johann Sebastian Bach, Francesco Canova from Milan O Francisco de la Torre, among others.

Sunday, 29 of May. Concert: Fahmi Alqhai & Rami Alqhai. The Spirit of Gambo

Sunday afternoon, the Chapel of the Royal Palace hosts a concert with two gamba violas performed by the brothers Fahmi and Rami Alqhai. Under the program, called The Spirit of Gambo, will sound among other topics: A Pavin, by Tobias Hume; The Human Voices Y The follies of Spain, by Marin Marais; The plissay, by Antoine Forque-‐ ray, Variations on a topic of Joe Satriani, the Fahmi Alqhai, Y Purple Haze, de Jimi Hendrix.

Latest end from week of the festival:

Carlos III left a deep mark on riverside architecture, as we shall see in this tour. We depart from the palace, To visit below examples of the urban development that the monarch himself promoted, until the Teatro Real that bears his name. There the concert closing the festival is celebrated, by the renowned soprano Maria Espada, accompanied by the theorbo of María Ferré and the viola da gamba of Amelia Way. Together they will offer a selection of jewelry six hundred italiano.