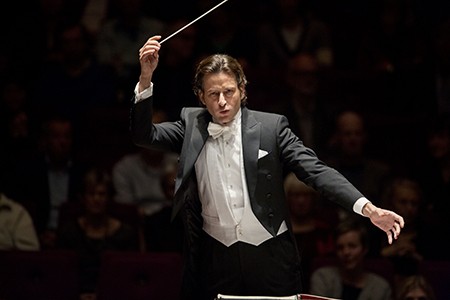 After announcing it will next chief conductor of the Toronto Symphony and excite the Luxembourg and Paris public with his version of Rigoletto, Gustavo Gimeno Valencian will offer five concerts in Spain with the group that leads from 2015, Luxembourg Orchestra. Accompanied by the prominent Swedish soprano Miah Persson and violinist Vilde Frang Norwegian, San Sebastián visit (11 of November, Kursaal), Madrid (12 Y 15 of November, National Music Auditorium), Valencia (Palau de la Música) and Oviedo (17 of November, Palacio de Congresos Prince Felipe).

The program they have prepared for these four cities including the Concerto for Violin and Orchestra, Beethoven, the symphony No. 5 in E minor, de Chaikovski, and the symphony No. 4, Mahler. further, the second concert offered in Madrid will address the part of Mahler Not too fast, he Violin Concerto, Bartok and symphony No. 2, Mahler.

The Valencian master, which has just announced that will head one of the most important cultural institutions in Canada, confirms at every step his unstoppable rise in the international music scene. He has recently released Rigoletto in Paris (3 October) with the Orchestra of Luxembourg and in January 2019 will debut with Verdi at the Zurich Opera House.

Gustavo Gimeno has been musical director of the Orchester Philharmonique de Luxembourg from 2015 and also will serve as conductor of the Toronto Symphony from 2020. He has led the Luxembourg group in a wide variety of formats and in the most prestigious stages throughout Europe. They have toured with great success by Germany, Austria, Belgium, Turkey and Greece.

“It's great. I have seen in my life directors of all colors, sizes and levels. But it is very rare to find one so good, so serious and so musical”, Gimeno said about the pianist and conductor Daniel Barenboim.

Gimeno and the Luxembourg group will continue their series of recordings with classical music label Pentatone, with just released an album dedicated to Stravinski. It includes the dirge which premiered at 2016 and The Rite of Spring, among other pieces. Since he began his collaboration 2017, They have already been published, Besides, the symphony No.. 1, de Shostakóvich; symphony No.. 1, de Bruckner; the complete ballet music Dafnis y Cloe, Ravel; and the symphony No.. 4, Mahler.

In past seasons he has performed with the Philharmonic and Luxembourg renowned soloists such as Daniel Barenboim, Bryn Terfel , Krystian Zimerman, Khatia Buniatishvili y Frank-Peter Zimmermann. In season 18/19 They will be invited artists of the caliber of Leonidas Kavakos, Yuja Wang and Katia and Marielle Labèque.

In January 2019 They will appear for the first time at the Zurich Opera House to play Rigoletto in a production directed by Tatjana Gürbaca. It has also led this work to Luxembourg and Paris. Her operatic debut was with Rule, Bellini, Opera in Valencia 2015. In 2017 He directed Simon Boccanegra, in Verdi, with the Orchestra of Luxembourg, en el Grand Theater Luxemburgo.

Born in Valencia, Gustavo Gimeno began his international career as a director 2012 and was a member of the Royal Concertgebouw Orchestra as assistant Mariss Jansons. Later, He was also assistant Bernard Haitink and Claudio Abbado, your mentor.

Since its bright start in Radio Luxembourg 1933, and turned into a state in 1996, the group is widely present in the European music scene and cultural life in Luxembourg. On location, la Philharmonie, inaugurated in 2005, is one of the most exceptional in Europe and its acoustics has been praised by orchestras, conductors and soloists who have visited.

The long partnership with the most renowned venues and festivals, and intensive work with famous musical personalities, They have consolidated the reputation of the orchestra, to which the excellent reviews are added to their recent record works, Grammy award-winning, BBC Music Choice, Grand Prix Charles Cros, Diapason d'Or y Prize of the German Record Critics. With their 98 musicians over 20 nationalities, the orchestra is a regular guest of the major music centers of Europe, Asia and the United States. In 17/18, he toured Spain, Germany, Austria, Italy and the Netherlands. In September 2019 They will undertake the first tour to Latin America.

In the third period of leadership of Gustavo Gimeno which reached its address after Henri Pensis, Carl Melles, Louis de Froment, Leopold Hager, David Shallon, Bramwell Tovey and Emmanuel Krivine- has significantly expanded its repertoire, ranging from Charpentier to Czernowin, through Mozart, Brahms, Mahler, Shostakóvich, Debussy, Bernstein y Feldman. This new repertoire is reflected in his discography with Pentatone.

In March 2019 They have scheduled several appointments with Labèque sisters Katia and Marielle, under the direction of Gimeno, Salzburg and Eindhoven. In the month of June next year also will rotate with pianist Yuja Wang in many cities as Hamburg, Brussels, Hannover, Düsseldorf, Ljubljana, Dortmund, Vienna, Istanbul or Athens.