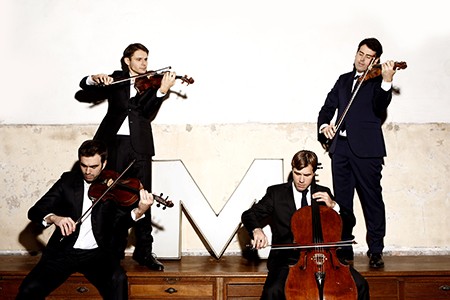 He Tuesday 15 December at 19.30 hours, he National Dissemination Center Musical (CNDM) celebrates a new concert of its cycle Liceo de Cámara XXI, in the Chamber Hall of the National Auditorium. In this concert, the famous Modigliani Quartet will join forces with two top international instrumentalists: the israeli violist Amihai Penny, founding musician of the Jerusalem Quartet and, until now, main viola of the Berliner Philharmoniker, and the Spanish cellist Pablo Ferrández, protagonist of a dazzling career that has earned him numerous awards and the highest praise from the international press.

Those attending this concert will witness a musical event of the first order: the absolute premiere, by the Modigliani Quartet, of a new string quartet by the British composer Mark-Anthony Turnage. This piece, Split Apart, It is commissioned by the National Center for Musical Diffusion, with Flagey (Brussels, Belgium) Darmstadt State Theater (Hesse, Germany), Concertgebouw (Amsterdam, Holland) y Society of Friends of Music in Vienna (Vienna Society of Friends of Music, Austria). This premiere is part of the already long list of works commissioned by the CNDM to the most relevant contemporary composers, pieces premiered in different cycles throughout successive seasons of the institution. Among these great names in the musical creation of the last two centuries we highlight figures such as Peter Eötvös (with his quartet for string and soprano sirens cycle), Krzysztof Penderecki (Quartet No. 4), Arvo Pärt (And I heard a voice), Toshio Hosokawa (Sounded the Lethe) O Jörg Widmann (Quintet for clarinet and strings, performed by this author and clarinetist).

In the second part of the concert, two works by Tchaikovsky will be heard: first, the splendid String Quartet No. 3 in E flat minor, what will the Modigliani Quartet. After, the quartet will be joined by the violist Amihai Penny and cellist Pablo Ferrández to address the nostalgic String sextet in D minor ‘Souvenir de Florencia’.

Modigliani Quartet
Composed by Amaury Coeytaux (violin I), Loïc Rio (violin II), Laurent Marfaing (viola) y François Kieffer (cello), the Modigliani Quartet resides in Paris and was founded in 2003. They are regular guests of the best concert series in the world. It was the first string quartet to play in the Elbphilharmonie great hall in Hamburg in 2017. In season 2019/20, the Modigliani performed in North America and Asia; in Europe at the Wigmore Room in London, the Liederhalle of Sttutgart, the Elbphilarmonie of Hamburg, Philharmonie de Paris, Konzerthaus Berlin, Bilbao Philharmonic, Amsterdam Concertgebouw, Prinzregententheater in Munich, Konzerthus of Stockholm, Konzerthaus in Vienna and in the LAC in Lugano. They have played festivals like the one in Salzburg, Schubertiade Schwarzenberg, Festival Menuhin de Gstaad y Schwetzingen SWR Festival. Since its formation, the Modigliani Quartet has played with other musicians with whom they have great artistic friendships, as Nicholas Angelich, Daniel Müller-Schott, Yefim Bronfman, Beatrice Rana or Renaud Capuçon. In 2019/20, The concerts with Christian Zacharias in Evian and a tour of Europe with the Schubert Octet stood out., with Sabine Meyer. In 2014, the Modigliani Quartet took the artistic direction of the Rencontres Musicales d’Evian, a festival created in 1976 by Antoine Riboud, made famous through his former artistic director, the legendary Mstislav Rostropovich, after a hiatus of thirteen years. The joint efforts of Evian Resort and the Modigliani Quartet achieved immediate success and the festival has once again become one of the most prestigious and popular summer festivals in Europe..

Amihai Penny
He was a founding musician of the Jerusalem Quartet and, until now, main viola of the Berliner Philharmoniker. He started studying the violin, but it went to 11 years when he decided to change instruments and start with the viola. In Jerusalem he received classes from David Chen, with Tabea Zimmermann in Frankfurt and Berlin, and in Tel Aviv with Haim Taub. Amihai Grosz performs as a soloist or with chamber groups with artists such as Yefim Bronfman, Mitsuko Uchida, Daniel Barenboim, Janine Jansen, Julian Rachlin, Gustavo Gimeno, Tugan Sokhiev and David Geringas. Play in the most prestigious venues around the world such as the Concertgebouw in Amsterdam, Tonhalle Zurich, Wigmore Hall in London or the Philharmonie in Luxembourg, as well as festivals including the Jerusalem Chamber Music Festival, the Schleswig Festival- Holstein, Evian, Verbier and the BBC Proms, among others. In season 19/20 performed with the Danish National Symphony with Alexander Vedernikov, the Auvergne Orchestra with Roberto Fores Véses and the Berliner Philharmoniker with Zubin Mehta, as well as chamber music collaborations with Janine Jansen & Friends, Daishin Kashimoto, Julian Steckel, Claudio Bohorquez y Eric the Wise, among others. Amihai Grosz toured with Magdalena Kozena and Sir Simon Rattle & Friends with concerts in Biel, Toulouse, Barcelona, Milan, Athens, Kattowitz and New York. This season he will collaborate with the pianist Sunwook Kim in the production of an album for viola and piano with works by Schubert, Partós y Shostakovich. Amihai Grosz plays a Gaspar-da-Salò de 1570, loan from a private collection.

Pablo Ferrández
Awarded at the XV International Tchaikovsky Competition, ICMA to the "Young Artist of the Year", Pablo Ferrández has also been awarded the Princess of Girona Award 2018 for his "exceptional talent and international projection". He recently joined the prestigious SONY Classical roster, signing an exclusive contract, and their first album will be released in January 2021. Praised for its authenticity, Pablo Ferrández “has it all: …temple, nerve, expressiveness and authority as a soloist ” (The country), “Possesses a pop idol magnetism, superior technique and exciting musicality " (LA Times) and continues his brilliant career collaborating with renowned artists and orchestras of international prestige. In recent seasons, his debuts at the Hollywood Bowl with Los Angeles Philharmonic and Gustavo Dudamel stood out., with the Bavarian Radio Symphony Orchestra and Daniele Gatti, with Bamberg Symphony y Christoph Eschenbach, the collaboration with Anne-Sophie Mutter playing Brahms' Double Concerto and Beethoven's Triple Concerto, and appearances with the London Philharmonic, Israel Philharmonic, Rotterdam Philharmonic, Vienna Symphony and the French National Orchestra, among other. This season, his debuts with the Filarmonica dela Scala and Riccardo Chailly stand out., Mahler Chamber Orchestra y D. Cats, Salzburg Mozarteum Orchestra, Philharmonia Orchestra, BBC Scottish Symphony, RTE National Symphony Orquestra, and his returns with the Dusseldorf Symphony at the Elbphilharmonie, RAI National Symphony Orchestra, Saint Petersburg Philharmonic Orchestra, the National Orchestra of Spain, Orquesta de RTVE, Symphonic Orchestra of the Balearic Islands and Euskadi Symphony Orchestra. He will also be a Resident Artist of the Tenerife Symphony Orchestra during the season 20/21. Pablo frequently collaborates with artists of the stature of Vadim Repin, Martha Argerich, Gidon Kremer, Joshua Bell, Yuja Wang, Nikolay Lugansky, Maxim Rysanov, Beatrice Rana, Denis Kozhukhin, Ray Chen, Alice Sara Ott, Elena Bashkirova, Luis del Valle and Sara Ferrández. 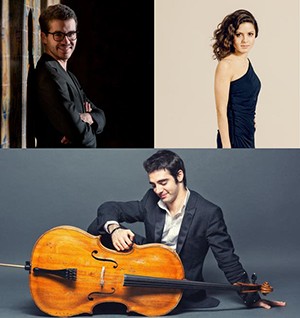 Thursday 8 March at 19.30 hours, National Dissemination Center Musical (CNDM) He reaches the sixth round of their cycle Liceo de Cámara XXI, focusing on chamber music, in the Chamber Hall of the National Music Auditorium in Madrid. Starring the three young Spanish interpreters with the greatest international projection of the moment: Cristina Gomez Godoy, oboe soloist with the Staatskapelle Berlin; Pablo Ferrández, Young Artist of the Year Award 2016 the ICMA, and Juan Perez Floristán, winner “Paloma O'Shea Competition” and “Steinway” Berlin, this concert will premiere on Trio for Oboe, cello and piano commissioned to the composer Jesús Torres by the CNDM, Resident Composer of the musical institution in this season. The program will be completed by works by Franz Joseph Haydn, Robert Schumann y Robert Kahn.

"With a warm tone and lyricism impulsive, while refined, Ferrández is an ideal interpreter for the Schumann concert, with its melancholic elegance and its bursts of mercuric bitterness " (The Guardian)