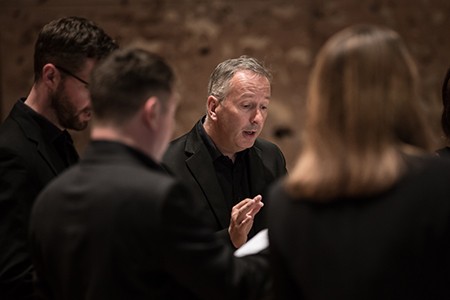 The second session Les Arts Florissants dedicated to Gesualdo if central in su Segundo book of madrigals, a work that was published in Ferrara in 1594, as the Book I, though possibly he had known an earlier edition, Gesualdo which would have given the stamp under the name Gioseppe Pilonij, since it was not seemly for an aristocrat he devotes himself to edit your own music, Neapolitan prejudice dismissed soon. as contextualization, The group led by Paul Agnew will continue to offer the same Gesualdo sacred pieces and works of other great masters of the time.

Set of singers and instrumentalists worldwide recognition, dedicated to baroque music, faithful interpretation with ancient instruments. Founded in 1979 by harpsichordist and conductor William Christie Franco-American, the group whose name is taken from the opera by Marc-Antoine Charpentier, He has played a pioneering role imposed on the French musical landscape a repertoire hitherto neglected (including the rediscovery of the countless treasures from the collections of the National Library of France); and today amply admired and interpreted, not only Grand Century French, but also of European music of the seventeenth and eighteenth centuries. Directed by William Christie who, since 2007, He has regularly entrusted the functions of co-direction of the British tenor Paul Agnew. Since the triumph of Atys by Lully at the Opéra Comique in Paris 1987, reinterpretada triumphantly in May del 2011, It is in the lyrical scene where Les Arts Florissants has achieved its greatest successes. Les Arts Florissants enjoy an equally excellent profile in concert halls, as revealed by their acclaimed operas in concert semi-performing version of operas and oratorios. every season, Les Arts Florissants offer around 100 concerts and opera performances in France -in Paris Philharmonie, where are artists in residence, en el Caen Theater, the Opéra Comique, el Théâtre des Champs-Élysées, el Versailles, as well as numerous festivals- and are an active ambassador for French culture abroad, He is invited regularly in New York, London, Edinburgh, Brussels, Vienna, Madrid, Barcelona and Moscow, among others. Les Arts Florissants has to its credit an impressive discography: about 100 recordings (CD and DVD) as well as its own collection, in collaboration with Harmonia Mundi, under the direction of William Christie and Paul Agnew. In recent years, Les Arts Florissants has created numerous training programs for young musicians. The flagship project is the Academy of Le Jardin des Voix: created in 2002 and held every two years, and provides a substantial number of new singers. El programa The Arts Flo Juniors, launched in 2007, It allows students to join the conservatory orchestra and choir for a production, from the first day until the last performance tests. There is also a partnership between William Christie, Les Arts Florissants and the Juilliard School of Music in New York, from which 2007 He has allowed a fruitful artistic exchange between France and the US. Les Arts Florissants also organizes numerous events to create new audiences at the Philharmonie de Paris, Vendee, in France and worldwide. States each annual program of concerts, They are designed for both amateur musicians and fans of all ages.