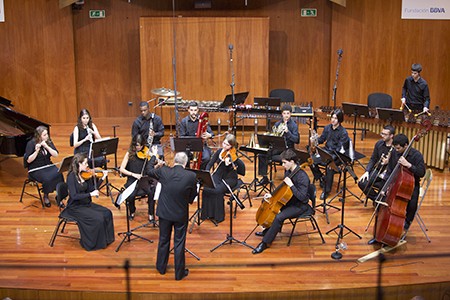 Monday 8 of May, the cycle Series 20/21 of the National Dissemination Center Musical (CNDM) It presented in the Auditorium 400 of the Museo Nacional Centro de Arte Reina Sofía de Madrid the penultimate concert of the season with the collaboration of the Reina Sofía Music School, BBVA Foundation and the Cisneros Foundation – Patricia Phelps de Cisneros Collection. For the occasion, Sinfonietta Music School Reina Sofía, Instrumental training focused on the music of our time from said academic institution, directed by the Swiss master Baldur Brönnimann, they will interpret the program "After Guernica" formed by works of Ligeti, Lindberg, Birtwistle Y Widmann. Thanks to the agreement of the institutions involved, the objective of promoting the crossing of music and the plastic arts is fulfilled, establishing the connections that naturally exist between its creators, either by sharing artistic movements, geographical origin, or just for inspiration. In this case, some of the works in the concert establish a very suggestive bridge with the exhibition "Pity and terror in Picasso. The road to Guernica " currently offered by the Museum until 4 of September. The concert is with free access until the capacity of the room is complete.

The Sinfonietta of the Reina Sofía Music School was presented for the first time in public on 14 April 2011 within the act of tribute that the Albéniz Foundation and the Reina Sofía Music School dedicated on that date to the memory of Enrique Franco, who died in 2009 and he was Vice President of the Albéniz Foundation and one of the main musical thinkers of his time. On that occasion it was Zsolt Nagy who led the ensemble.

The creation of the "Sinfonietta", in collaboration with the BBVA Foundation, is part of the line of work opened by the Reina Sofía School of Music in which contemporary music, in its double aspect of creation and interpretation, plays an important role. The result of this initiative is the project "Music for a School", that arose on the occasion of the celebration of the 70th birthday of its President, Paloma O'Shea, who wanted to present the School with a series of commissions to the main Spanish and foreign composers, who were asked a music destined to be studied and premiered by the musicians of the School, giving them complete freedom in terms of instrumental template and duration, and without limitation regarding the technical difficulty of the work. The main objective of this project is that the works are inserted naturally in the academic plan of the School, of the Institute of Chamber Music and the Santander Music Meeting, producing their premieres throughout the artistic life of these institutions. Among the composers who have joined the project are: César Camarero, John Corigliano, Tan Dun, Peter Eötvös, Antón García Abril, Sofia Gubaidulina, Joan Guinjoan, Toshio Hosokawa, Francisco Kröpfl, Tomás Marco, Marlos Nobre, Luis de Pablo, Fabián Panisello, David del Puerto, Krysztof Penderecki y Karlheinz Stockhausen.

The group was born with the objective of training young performers in the knowledge and practice of the repertoire of the 20th and 21st centuries. The formation of the Sinfonietta is variable in number and type of instruments, in the manner of the instrumental "ensembles" that have carried the fundamental weight of musical creation in recent decades. The Sinfonietta thus enriches the stable instrumental ensembles created by the Reina Sofía School of Music, which include the Freixenet Symphony Orchestra and the Camerata Viesgo.

Born in switzerland, Baldur Brönnimann trained at the Basel City Academy of Music and the Royal Northern College of Music in Manchester, where he was appointed as visiting professor of Management. Between 2008 Y 2012 was musical director of the National Symphony Orchestra of Colombia in Bogotá and in January 2015 was appointed Principal Director of the Orquestra Sinfónica do Porto Casa da Música, after a long relationship with the orchestra and since September 2016 is Principal Conductor of the Basel Sinfonietta. Brönnimann has worked with composers such as John Adams, Kaija Saariaho, Harrison Birtwistle, Unsuk Chin, Thomas Adès and orchestras such as the Oslo Philharmonic, the Royal Philharmonic in Stockholm, the British Symphony, Philharmonia Orchestra, the BBC Symphony, the Copenhagen Philharmonic and the Seoul Philharmonic. Among his operatic projects are those carried out at the English National Opera (ONE), Norwegian Opera, Festival Internacional de Bergen y Theater an der Wien, as well as at the Teatro Colón in Buenos Aires, in which he has directed the works Expectation de Schoenberg, Hagithde Szymanowski y The Little Match Girl the Lachenmamm.