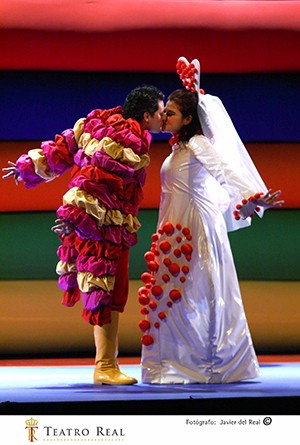 The Royal Theater has presented a comprehensive and consolidated project for young and new audiences with a twofold: the dedicated to the show, and focused on teaching and dissemination, through Royal Junior and training program accomplished, in which you can participate all the public. Programming The Real Junior and training courses become one of the cornerstones of programming Bicentennial.

Aware of the need to open up to new audiences and promote the hobby of viewers who will be the future, Real it has designed different options that offer the opportunity to meet, in a fun and attractive, the world of opera through shows in two scenarios, the Main Hall and the Sala Gayarre, with the broadcast in cinemas and schools in the titles of their programming and training courses and activities aimed at the younger.

A) Yes, Real return to two of the most successful productions have won in past seasons. Open programming the updated Dido and Aeneas, Henry Purcell, by the young Spanish talent, Rafael R. Villalobos, whose figure is consolidating some of the most important stages in Europe, and focuses the action of the play in the living problems of our age adolescents: jealousy, friendship, fidelity and jealousy. Will follow on the calendar Loft toys, the curious proposal from the Company Etcetera inspired by the work of Claude Debussy, to take the little ones to a "hidden place" of the theater where toys come to life to tell a story full of tenderness, surprises and mood.

Mother Goose, Ravel, will lay off the year and will welcome the 2018 with a concert staged semi intended for all audiences at Christmas, to enjoy whenever tales inspired the French composer. January we also delve into the ingenious world Charles Chaplin a film show and live music, designed for children from four years, but it makes you smile the whole family: Old cinema new music.

After the great success of the concerts for piano in the hall of the Royal Theater Orchestra last season, where music is surrounded by a heady atmosphere, Presents itself The hidden face of piano, an opportunity to explore the different worlds that are hidden in their keys. And about to receive spring, comic opera The phone, with music by Gian Carlo Menotti, and dance show Pulcinella, with music by Igor Stravinsky and choreography by Fernando Lazaro, put the finishing programming of Real Junior.

continue, one more year, encounters familiar with the music of the workshop Everyone to the Gayarre!, directed and presented by Fernando Palacios, Sunday meetings to analyze, know and enjoy all the details and particulars of the great titles that make up the backbone of the great programming of the Teatro Real opera. Monthly basis, always in session twice on Sundays, Everyone to the Gayarre! It has established itself as the benchmark to enjoy and learn music sessions that allow the participation of the whole family.

One of the biggest bets of the Teatro Real is focused on accomplished, the training program, through workshops, conferences and specialized courses, It provides an opportunity to raise awareness of the opera and the internal activity of the institution. There are three pillars on which is built and developed the program: College scene, Exposed opera and the monographic courses, designed to meet the demand of both amateur and those who want to focus or supplement their professional practice within the framework of performing arts or music.

University scene, pioneering project in Europe, registered in the European Higher Education Area, It allows college academic credit after participating in meetings and discussions with the artists and the subsequent development of an academic work on the productions of the Teatro Real, analyzed from the perspective of their respective specialties.

The monographic courses combine theoretical learning with active participation, designed in various formats and taught by specialists in various fields, in order to analyze specific issues always around the world of opera. The issue will now begin such prestigious names as Javier Fesser, Paul Laporte, Gabriel Menendez Y Alberto Look.

Exposed opera: how to ride a big production, this season will revolve around three distinct titles: Bohemian, Street Scene YGloriana. Each workshop consists of ten sessions along which will follow and analyze the operatic production process to discover and study the various disciplines involved and make possible a premiere on the stage of the Royal Theater.

In addition to family functions, Teatro Real strengthens every year relationship with schools through pedagogical functions, performances taking place on the stage of the Madrid coliseum, but they have a prior preparation for students through a teaching guide, training tool aimed at teachers and parents, that can offer complete information on the show before accessing it.

In order to reach as many schools as possible, Royal Theatre, in coordination with the Ministries of Education of the Autonomous Communities that have signed cooperation agreement (Andalusia, Aragon, Castilla la Mancha, Madrid and Murcia) allow access to some of the shows of children's and youth programming through stage Digital, the platform online The Royal Theatre.

A) Yes, each school will offer the show at its premises in the morning of the appointed day in the program, in the time slot that best suits your needs. The titles chosen for the current school year are Moonlights, he 22 of November, Y Dido and Aeneas, 10 of May.

In the same way, they give performances of The Royal Junior in family roles morning in cinemas across Spain. This season, They will be screened The dream of a nigth of summer, he 1 October, Y The cat with boots, he 6 of May.