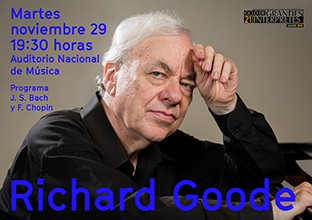 The New York pianist Richard Goode will offer a concert next Tuesday 29 of November, in the 21st season Cycle Great Performers Foundation Scherzo. Goode concert, He is known worldwide as one of the best interpreters of the work of Beethoven, will take place in the National Music Auditorium and he addressed compositions Bach Y Chopin.

Born in New York, Goode studied with Nadia Reisenberg at the Mannes College of Music and Rudolf Serkin in Curtis Intitute. He has won numerous awards including The Young Concert Artists Award, first prize in the Clara Haskil Competition, the Avery Fisher Prize y un Grammy. His first public performance of the complete cycle of Beethoven sonatas held in New York in 1987 Y 1988, and it was hailed by The New York Times as "one of the most memorable events of the season". Would repeat the same cycle in Queen Elisabeth Hall in London 1994 Y 1995 with the same success. Of the, They have highlighted their great sensitivity, depth and expressiveness.

In season 2016/17, among other concerts, New York pianist returns to the Edinburgh International Festival, al Wigmore Hall, the Royal Festival Hall in London, the Liszt Academy in Budapest, Piano has the Jacobins Toulouse, Bergen International Festival and will debut in Stockholm in the Big Concert Hall. Likewise, Cycle back to the Great Performers of Scherzo, in which debuted in 2006. Goode also perform along with the Helsinki Philharmonic Orchestra and the Budapest Festival Orchestra, under the orders of Ivan Fischer. With the latter group, will offer concerts in the Hungarian capital, NY, Chicago, Boston, Ann Arbor y Newark.

In United States, It highlights its return to the Mostly Mozart festival, Lincoln Centre, where it will interpret the Piano Concerto K.414 Mozart, directed by Louis Langrée. It will also offer recitals in numerous series as the Washington Performing Arts, Carnegie Hall, the Masters Series of the Van Cliburn Concerts (Fort Worth), Duke Performances in North Carolina, Green Music Center de California, Minnesota Beethoven Festival and the Chamber Music Society of Philadelphia.

Exclusive artist label Nonesuch, Goode has recorded more than two dozen albums, ranging from his solo work, to chamber music, lied and concerts. His last recording, the five Beethoven concertos with the Budapest Festival Orchestra and Ivan Fischer, It was published in 2009 receiving rave reviews; He was also nominated for a Grammy Award and the Financial Times called it "a milestone in the music world". Its series 10 CDs with the complete cycle of Beethoven sonatas, the first recording made by a pianist born in the United States, He was nominated for a Grammy and Gramophone selected Good CD Guide. His other albums are marked series of Bach Partitas, he lied Dawn Upshaw and Mozart piano concertos with Orpheus Chamber Orchestra.

From 1999 until 2013, Richard was Artistic Director, along with Mitsuko Uchida, de la Marlboro Music School and Festival en Vermont. He is married to the violinist Marcia Weinfield Y, when not on tour, They are living in New York City.

This will be the last concert of the 21st season of the Great Performers of Scherzo Cycle, inaugurated last February by Ivo Pogorelich. In addition to the Croatian interpreter, They have also gone through the stage of the National Auditorium reputed pianists Arkadi Volodos, Grigory Sokolov, Paul Lewis, Emanuel Ax Y Lang Lang, the latter in a special concert for which tickets sold out. Another special concert, that of Philippe Jaroussky with the Freiburg Baroque Orchestra, also he hung the sign you exhaust your performance tickets 12 of November. The program included the 21st season 11 recitals, as well as three lectures by Volodos, Lewis and Fellner. Throughout their 21 editions, Great Performers Cycle has received more than 200 concerts of the best pianists of recent decades, whose music have enjoyed over 300.000 people.