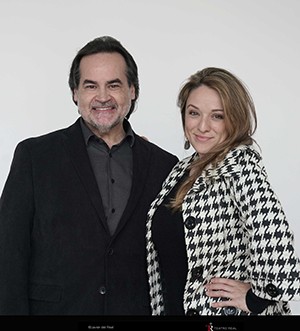 He 26 April at 20.00 hours, concert with tenor José Bros and soprano Ruth Iniesta.

Zarzuela returns to Teatro Real tenor hand José Bros, who has acted in the only two works of this genre appeared on its stage since the reopening, in 1997: African duo, from Manuel Fernández Caballero (2004) Y Luisa Fernanda, from Federico Moreno Torroba (2007). In addition to these titles, Bros has played in Real the lead roles of two other Spanish operas presented in concert and recorded on disc: The conquest of Granada, in 2003, e Ildegonda, in 2006, both of Emilio Arrieta.

although 77 performances that he has starred in at the Real have been mostly works from the bel canto repertoire ─L'elisir love, Lucia of Lammermoor, to Favorites, Roberto Devreux, La sonnambula, Werther, etc.─, the Verde ─La traviata, Rigolleto─, José Bros will hold its 25 year career and his link with the Madrid coliseum with a concert dedicated to zarzuela. will act with Ruth Iniesta, whom we have seen at the Royal Theater Death in Venice, from Benjamin Britten, in 2014, Y Der Kaiser von Atlantis, from Victor Ullmann, in 2016, and now participates in Falstaff, whose premiere will take place tomorrow, opera in which she plays the role of Nannetta.

The two singers, together with Head of the Royal Theatre Orchestra, under the direction of José María Moreno, will perform preludes, arias and duets from some of the most popular titles of zarzuela: Luisa Fernanda Y Mount Carmel, Federico Torroba; at Revoltosa Y The drum grenadier, Ruperto Chapí; Doña Francisquita, Amadeo Vives; The barmaid port, Paul Sorozábal; Play with fire, of Francisco Asenjo Barbieri; Lights and shadows, Federico Chueca; The host of Seville, Jacinto Guerrero; etc. (see attached program).

The Mallorcan director José María Moreno, with extensive experience in the interpretation of Spanish lyrical repertoire, will debut at the Teatro Real.