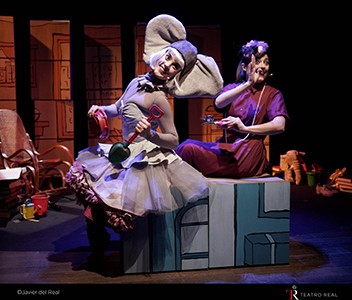 After the voices of Don Carlo and the steps of Giselle, he Teatro Real programming now opens Royal Junior, dedicated to children, youth and family, with which you want to create a way of opening or initiation of children to musical and artistic world, arousing their curiosity and encouraging moments to share with their environment.

The next 19 October, one day before school function, will open the season My friend the monster, a production of the Clair de Lune Company, inspired by the novel by Mary Shelley Frankenstein, which makes an adaptation for shadow puppets and actors who interpret the plot in front and behind the screen. In parallel to the premiere of this title, the SGAE Foundation will hold two film sessions on the figure of these beings in the Berlanga room with the projection of the films A monster comes to see me, Jose Antonio Bayona, Saturday 26 October, Y handia, Jon Garaño and Aitor Arregui, Saturday 2 of November, both the 17.00 h.

Through different artistic expressions -Finger puppets, music stories, projections, who, opera and circus- with a playful approach, and music in the center of each story, Stories and fables will be told whose content will be a vehicle for transmitting values ​​and knowledge with which children can compose their own vision of the world.

Activity Royal Junior will make this season the Sala Gayarre in the heart of its activity, providing viewers closeness and complicity with the artists. It will take place four of the seven shows scheduled: My friend the monster (puppetry), The Little Match Girl (new musical tale), old cinema with new music (silent film with live music) e Story of Babar, the little elephant (musical tale).

Chamber Orchestra, one of the landmarks in the Theater, beautiful sunset overlooking the city, it will no longer invade at night and in the dark A Piano of other worlds will be the theme of a story that will transit from Wagner to Pink Floyd.

Behind the red curtain in the main room they will hide Acrobat and harlequin (opera and circus) and the last show of the season, in May, wherein the master Lucia Marin It will be placed in front of the Youth Orchestra of the Community of Madrid to interpret works of the most passionate Beethoven in a didactic concert conducted by humor and wit Luis Piedrahita under the title Alabin, pRAISE, a la Ludwig van! ¡Beethoven, Beethoven and no one else!

The cycle of family workshops Everyone to the Gayarre! what, monthly basis, performs a musical introduction, lighthearted and entertaining, around the great titles of the main stage, will continue another year with management and presentation Fernando Palacios, Sunday eighteen meetings between the months of October to June.

The Royal Theater continues its partnership program with schools across Spain, beyond the pedagogical functions that take place in the theater itself, rebroadcasting shows Real Junior in schools throughout Spain, thanks to collaboration agreements with the autonomous communities (Andalusia, Aragon, Castilla la Mancha, Castilla y León, Madrid and Murcia).

The next May, Teatro Real production The Little Match Girl, inspired by the homonymous story of H.C. Andersen, written and directed by Rita Cosentino scene, will travel to Badajoz as one of the activities that are part of the agreement signed between the Provincial Council of Badajoz and the Royal Theater for the promotion of opera in Extremadura.

All shows will count, as usual, with a tutorial, accessible for free via the website of the Theater (www.teatro-real.es) for parents and teachers, in which detailed information about the show and, fundamentally, practical exercises for teachers and parents to help small to get a broader view of the world that will know.

MY FRIEND THE MONSTER

Based on the novel Frankenstein, from M. Shelley

6 representations between 21 from February and the 1 March 2020

HISTORY OF BABAR, THE BABY ELEPHANT

Tale of J. Brunhof which F. Poulenc set to music

Alabin, pRAISE, The LA LUDWIG VAN! ¡BEETHOVEN, BEETHOVEN AND NO ONE ELSE!

children's workshops with management and presentation of Fernando Palacios.