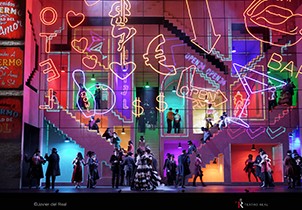 The next 6 of November, El Palco Spanish TV program, will issue The Liebesverbot, Youth Opera Richard Wagner (1813-1883), released in Teatro Real last season, who enjoyed a great reception from the public and which critics said it was a "privilege that can not be missed" because it is "a great discovery".

In this fun, fresh and melodious score, light Mediterranean flavor, one Wagner 21 years censured and resorts to biting comedy Measure for Measure from William Shakespeare (1564-1616) to criticize the hypocrisy and puritanism of the Central European nineteenth century society, claiming sexual freedom, the expression of feelings and southern heat. For this action moves the original Shakespearean work from Vienna to Sicily, Friedrich -caricatura where the German dictator hiding behind a purported idealism imposes the death penalty to punish sexual promiscuity and prohibits brothels, carnival and extramarital love that he himself succumbs.

The Liebesverbot, written after The fairies which he could never listen-Wagner, He had its premiere at random 1836 in Magdeburg. The first and only performance of the opera during the composer's life was disastrous, as some soloists did not know their role. The second function could not celebrase because the husband of the protagonist, in a jealous rage and driven, maybe, by hedonism and lust that boasts the plot, He attacked the tenor playing the role of Claudio, who, apparently, undisguised maintained a romance with his wife.

In front of them all, and Headlines Choir and Orchestra of the Teatro Real, be the master Ivor Bolton, responsible for the musical part, and the stage manager Kasper Holten, that modernizes this Shakespearean comedy tangle with winks to the present.