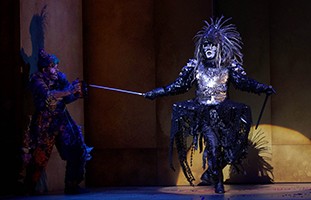 Ullmann composed this work during their stay in the camp Terezin. A kind of advertising city where the Third Reich had held, preselection, Jews with "special qualities". Including several composers like Ullmann own.

Schömbery disciple and assistant Zemlinsky, It took as libretto for text composition of another prisoner, the poet Peter Kien. Together they created a satire in which an emperor declares war on all humanity and even death, one of the protagonists of the work, Confronts. Perhaps the obvious criticism of Hitler and Goebbels were the reasons why the work was never represented.

The original score, written for 13 instruments, It offers a more intimate chamber version that we have heard in the Royal Theatre. the orchestration, created by Pedro Halffter por encargo Joan Mataboch, It is excessive and somewhat superficial. A perhaps lush and cold metal music sounds, that breaks with the more personal and easy atmosphere with which the composer reflects the circumstances of its composition.

As a preface to Der Kaiser von Atlantis, He offered himself The song of love and death of Cornet Christoph Rilke, for narrator and orchestra with music of Ullmann own. The actress Blanca Portillo It is in charge of the narrative, and does so with such brilliance that achieves almost unnoticed through the awkward stage design work Gustavo Tambascio Y Ricardo Sánchez Cuerda. The powerful voice projection Blanca Portillo, critical and scarce quality among Spanish actors, It makes it unnecessary excess amplification.

This first prologue follows the Adagio in memoriam de Ana Frank and Little overture to "Der Kaiser von Atlantis". Both based on movements Sonata para piano núm.7 de Viktor Ullmann, with music by the composer and orchestrating Pedro Halffter. These works were accompanied by unnecessarily explanatory projections on the theme of the night.

The scenery of Gustavo Tambascio is somewhat unclear. The characters are sometimes out of a context that defines them and help set the scene. It was noted especially with the appearance on stage, some troubles, from Sonia de Munck as Bubikopf. The weight of his great headdress hindered his wanderings. Sometimes singers, not only have to sing well, They must also overcome the difficulties of stage directors. What sometimes affects the quality of the emission.

Alejandro Marco-Buhrmester, as Emperor Overall, He shone in the interpretive part. His voice is enough for the character but more than enough of gola.

Mayor drum was played this time by the soprano zaragozana Ruth Iniesta. His voice volume is clear and resolved freely be called at the last moment for this role.

Torben Jürgens scary with its extraordinary characterization of death, to helping its disturbing stage presence and his deep bass voice. His character went from evil to good when he denied his collaboration to the Emperor to start the slaughter.

The best and most applauded of the evening was Martin Winkler como Speaker. With an outstanding phrasing and interpretation radiant and full of intent and energy, He puts irony and poignancy that is hidden in this work.

The end, with the image of the bottom of the Jews entering the gas chamber to be exterminated, It reflects all alone sinker containing the work and this whole cycle dedicated, so aptly, this period of history in Europe.

Viktor Ullmann (1898 – 1944)
The Emperor of Atlantis or The Todt abdicates
One-act opera with libretto by Peter Kien
Released in the Theater Bellevue Amsterdam 16 December 1975, depending on the version of Kerry Woodward.
premiere of the extended review for large orchestra by Pedro Halffter (2015)
New coproduction of Teatro Real, Teatro de la Maestranza in Seville and Palau de les Arts Reina Sofia in Valencia. 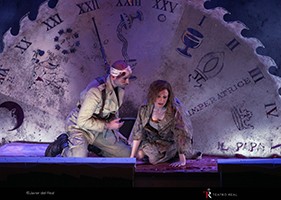 Between days 10 Y 18 June the Teatro Real will present the opera Der Kaiser von Atlantis abdication or death, from Viktor Ullmann (1898-1944), libretto by Peter Kien (1919-1944): a sarcastic comedy cabaret perfume, let operetta and jazz rhythms, created under extreme conditions in the concentration camp Terezín, in 1943, before both artists spend their days in Auschwitz.

This opera in one act, which will debut with a new orchestration Pedro Halffter -Head also its direction musical-, It will be preceded by a prologue consisting of three interlocking works: The song of love and death of the bugle Christoph Rilke, for narrator and orchestra, with music by Viktor Ullmann and text Rainer Maria Rilke (in Spanish version Jesus Munárriz) which opens in Spain with interpretation of actress Blanca Portillo—; and parts Adagio in memoriam Ana Frank and Small overture to "Der Kaiser von Atlantis" both with music and orchestration of Pedro Hallfter based on the Piano Sonata No.. 7 de Viktor Ullmann.

Gustavo Tambascio, with a wide and versatile career in Spain, and that Real has directed the world premiere of Dulcinea, from Mauricio Sotelo, It is responsible for the stage direction of production, placing Ullmann opera in its oppressive real and metaphysical context, with the help of an ingenious dramaturgy that articulates the three works of the Prologue to the opera, glossing the ideas of honor and death.

The Titular Orchestra of the Teatro Real, under the direction of Pedro Halffter, will perform all the works of this unique show, that will take the audience the music of Viktor Ullmann, that barbarism silenced for so long.

this show, with premiere next 10 of June, It is a new production of Teatro Real, in co-production with Teatro de la Maestranza in Seville and the Palau de les Arts Reina Sofia in Valencia, where the opera will be presented in coming seasons.

THE COMPOSER AND OPERA

Born in 1918 within a Catholic family of converted Jews, in the Czech city of Teschen, then part of the Austro-Hungarian Empire and now belonging to Poland. This crossroads of religions and nationalities mark his itinerant life through the center of Europe -Vienna, Prague, Zurich, Stuttgart ... - reconciling his professional career with constant learning and constant spiritual quest, he found encouragement in anthroposophy of Rudolf Steiner.En 1942, and famous and with an extensive catalog of musical works, He was confined to part of his family in the concentration camp of Terezin, "Model ghetto" of Nazi propaganda where Ullmann developed a frenetic activity as a composer, dynamic conductor and artistic activities until his deportation and murder in Auschwitz 18 October 1944.

Among the works created in the last two years of imprisonment in Terezín stands The Emperor of Atlantis or The abdication of Death, written for a small instrumental group seven singers, they did several tests before the opera of them cogiera the death train to Auschwitz.

the score, with eclecticism in vogue then, recalls the music of Weill, O del Hindemith Stravinsky Renard. With influences of the Berlin cabaret and jazz touches, skillfully weaves together many musical events recognizable by their interpreters, from a hymn to a Lutheran chorale, a Strauss waltz or repetitive appointment of Symphony Azrael of Josek Suk, evoking the angel of death with the famous tritone of diabulus in musica.

Der Kaiser von Atlantis is a gagged satire in which a deranged and despicable Emperor (Kaiser) which brings us inevitably to the figure of Hitler, declared a total war against the rebels Death, renouncing do their job: if no one can die, meaningless battles. Death should not lose their dignity: You can not accommodate within it the defenseless, malnourished, demented, desnortados, children and the sick of the concentration camps and extermination.

The libretto acid talented young writer Peter Kien, killed in Aschwitz with just 25 years, aroused suspicion of the Nazis, that prevented the opening of the opera.

The numerous scores Ullmann wrote feverishly in Terezin passed through several hands until the British director Kerry Woodward knew them in 1972. To him the first edition of Der Kaiser von Atlantis and the premiere of the opera in Amsterdam should, in 1975, after a lethargy 30 years.

Since this short opera, written in the most atrocious circumstances, It is a living testimony to man's ability to create on the edge of their forces, laughing at the inevitability of their fate, surrounded by pain, horror and senselessness.

Music at the time of the Weimar Republic

Kurt Weill: Berlin im Licht
Walter Kollo: enterprises Linden
Werner Richard Heymann: The small town / On the channels
Hanns Eisler: tHE dITCH
Friedrich Holländer: I am from head to toe
Kurt Weill: And what did the soldier 's wife / Alabama Song / Bilbao Song
Werner Richard Heymann: Today’ I liked me
Kurt Weill: For as you make your bed so lie in it / pineapple Lied
Friedrich Holländer: Out with the men from the Reichstag / Two dark eyes, two eggs in a glass
Mischa Spoliansky: Life without love