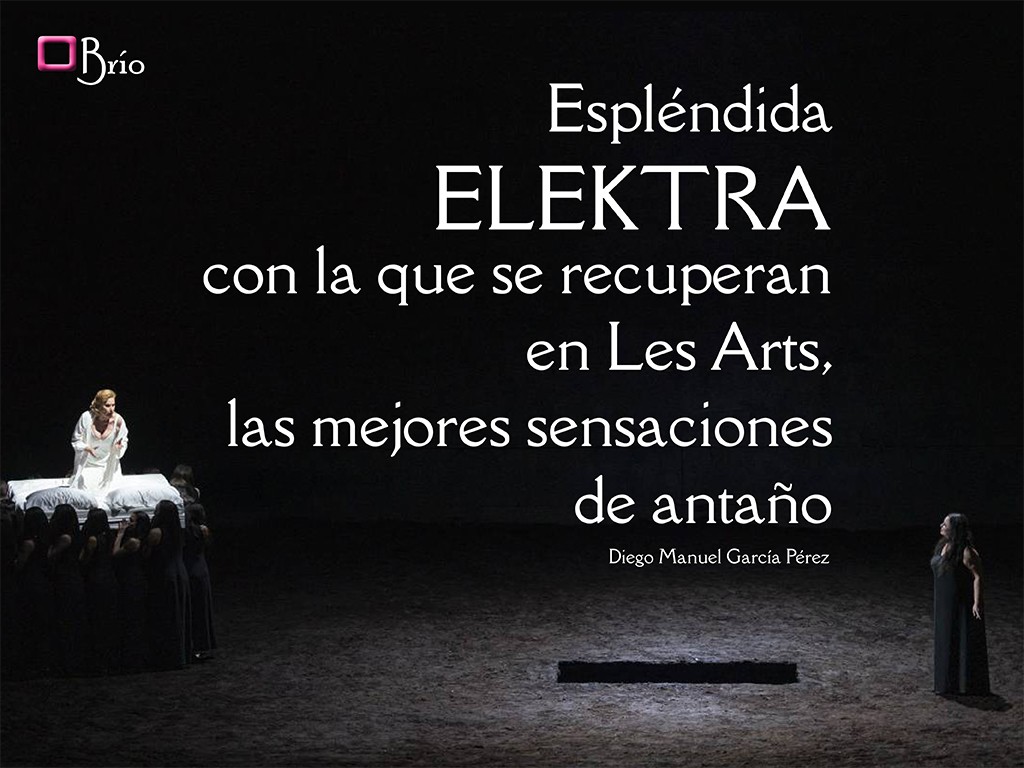 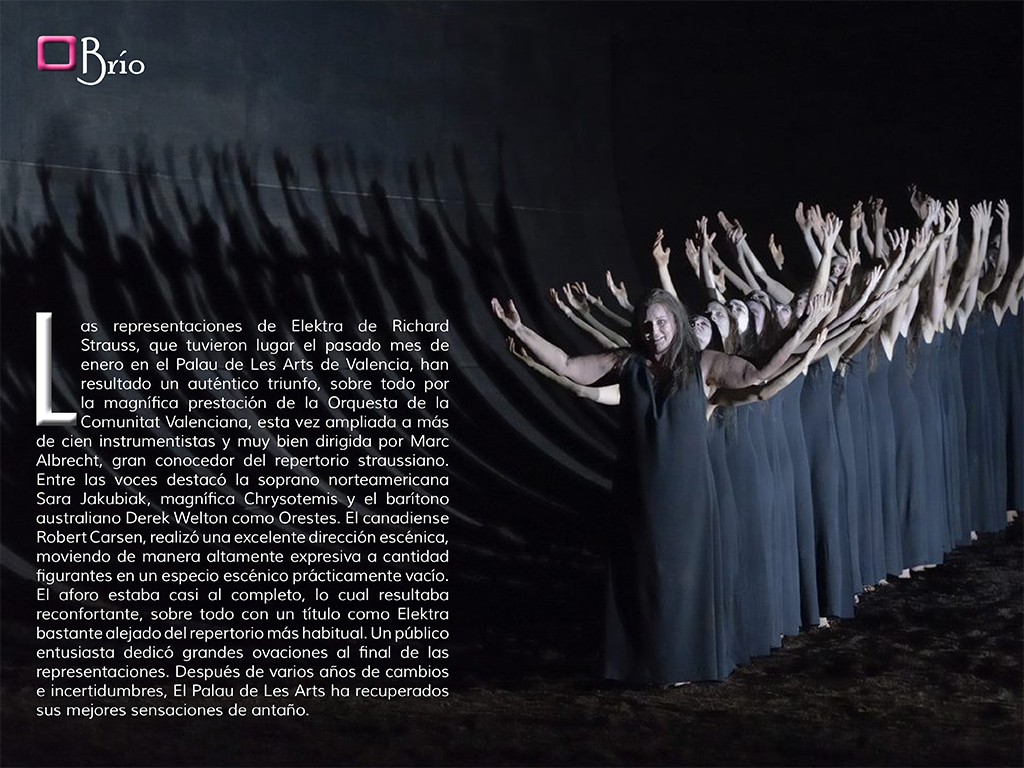 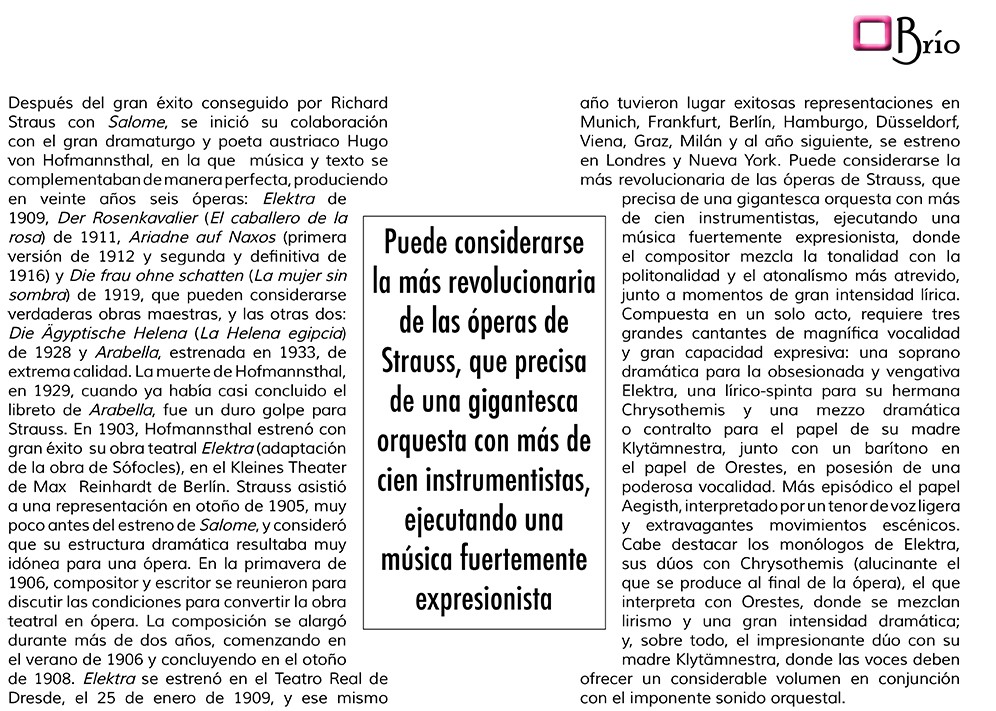 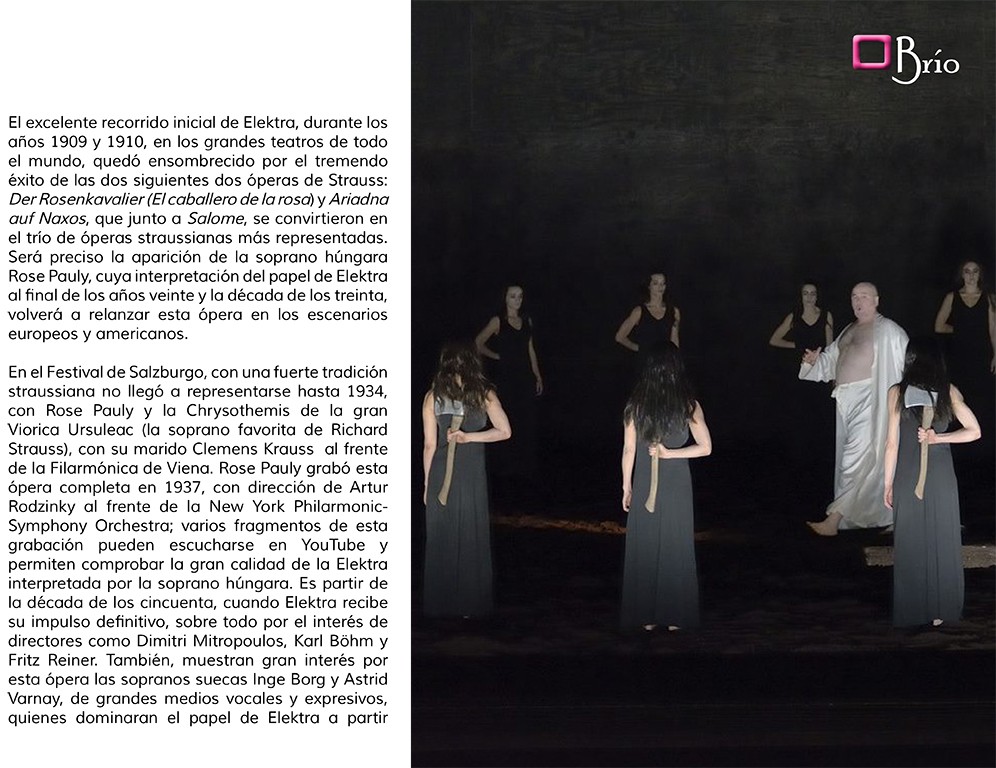 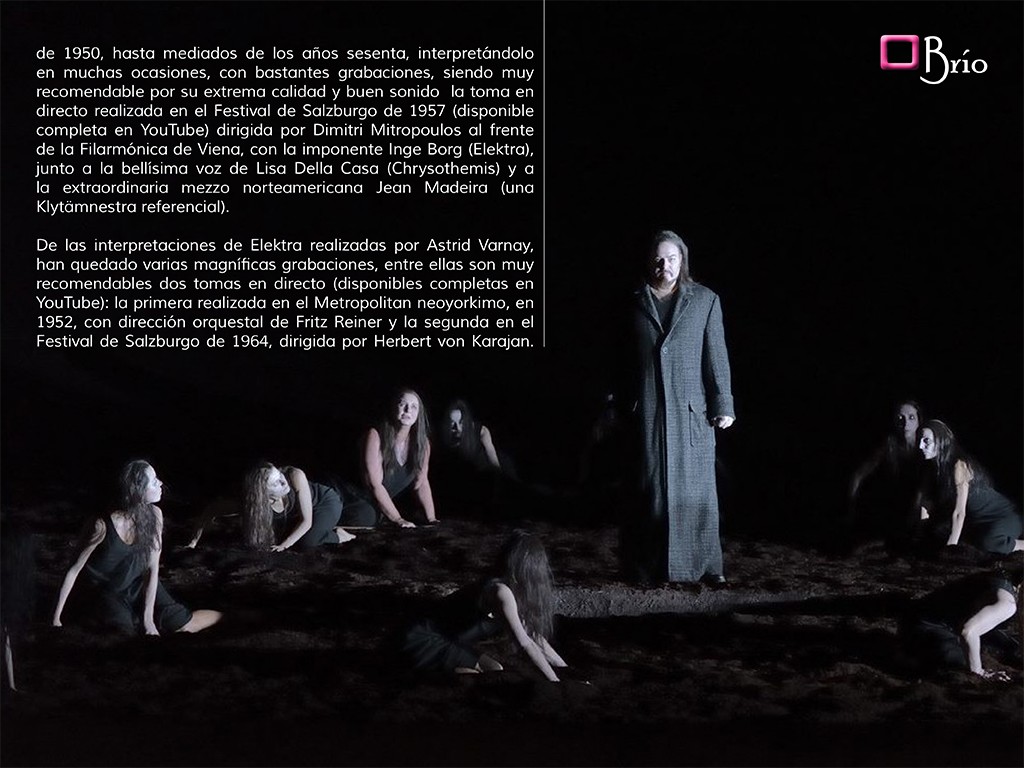 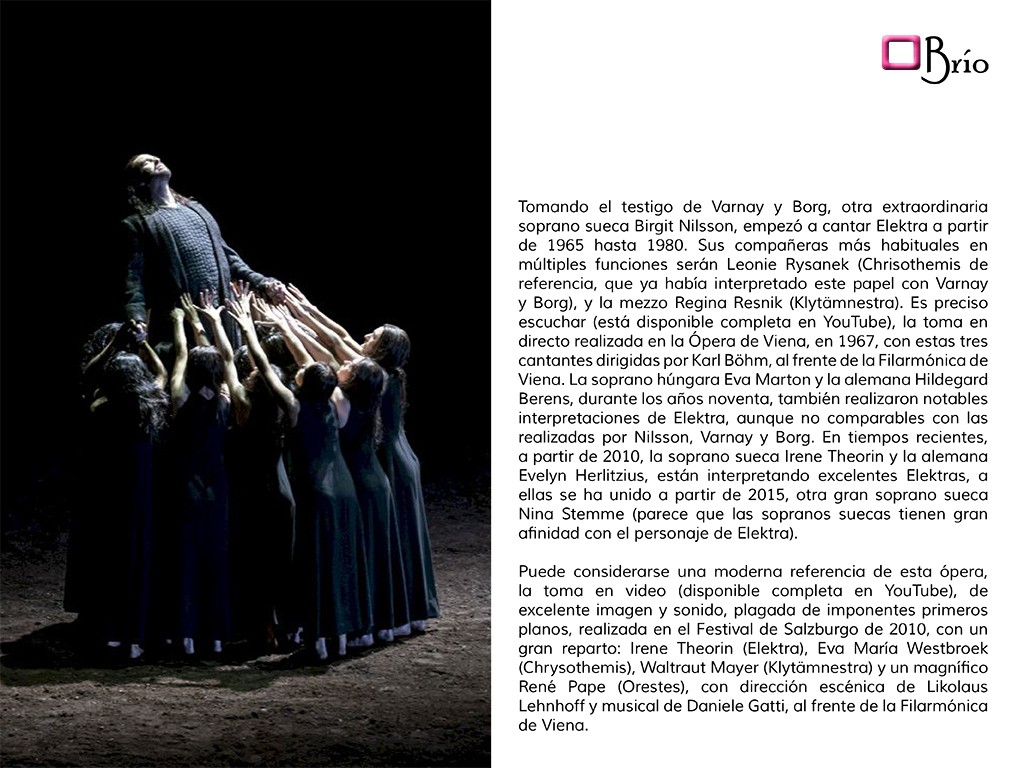 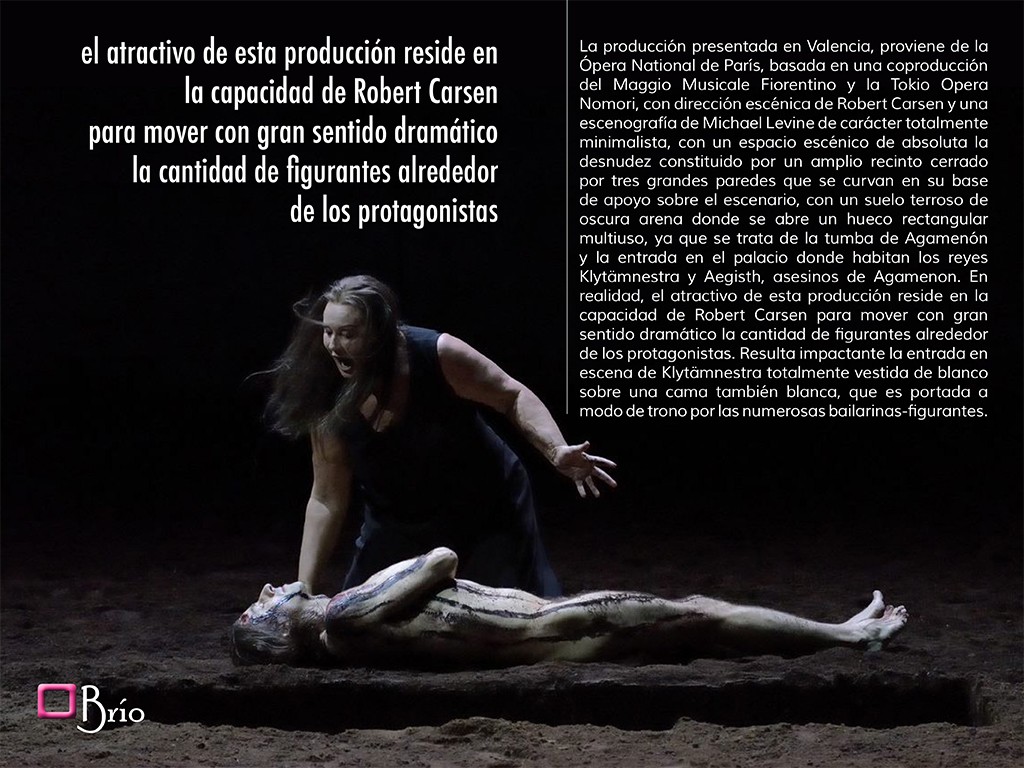 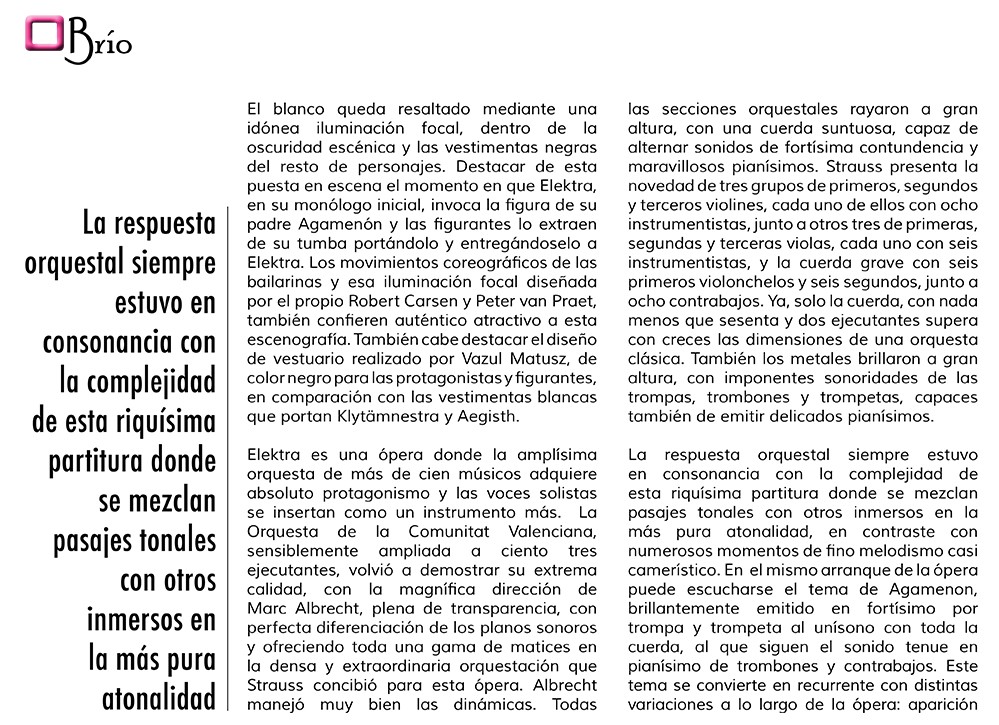 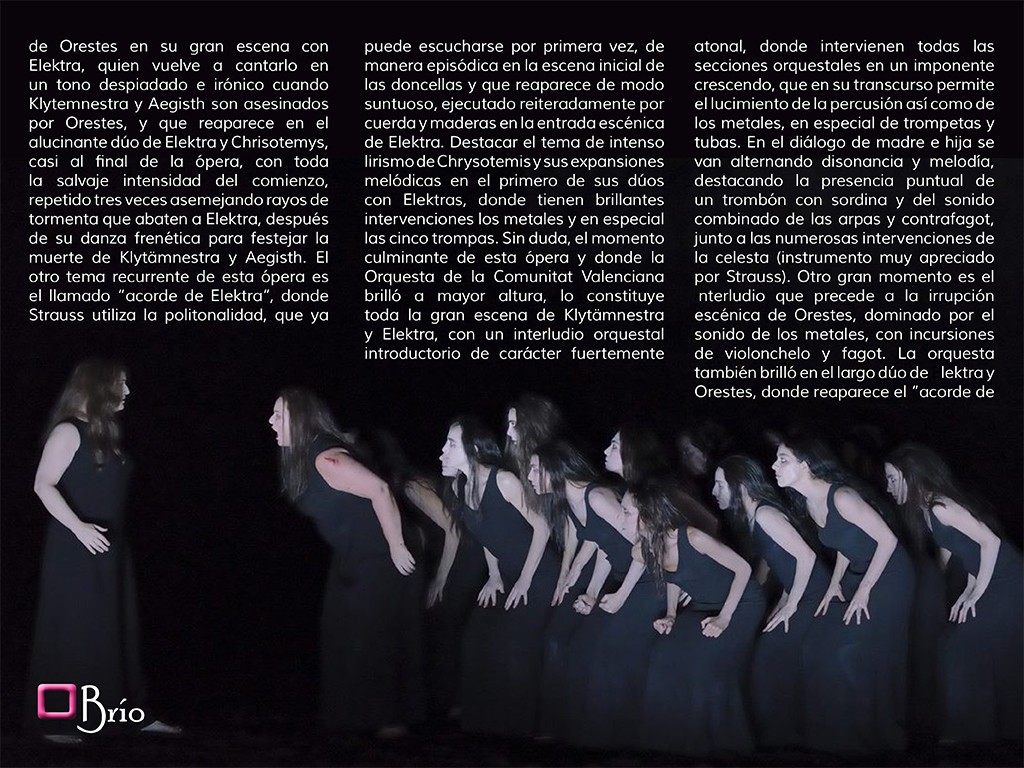 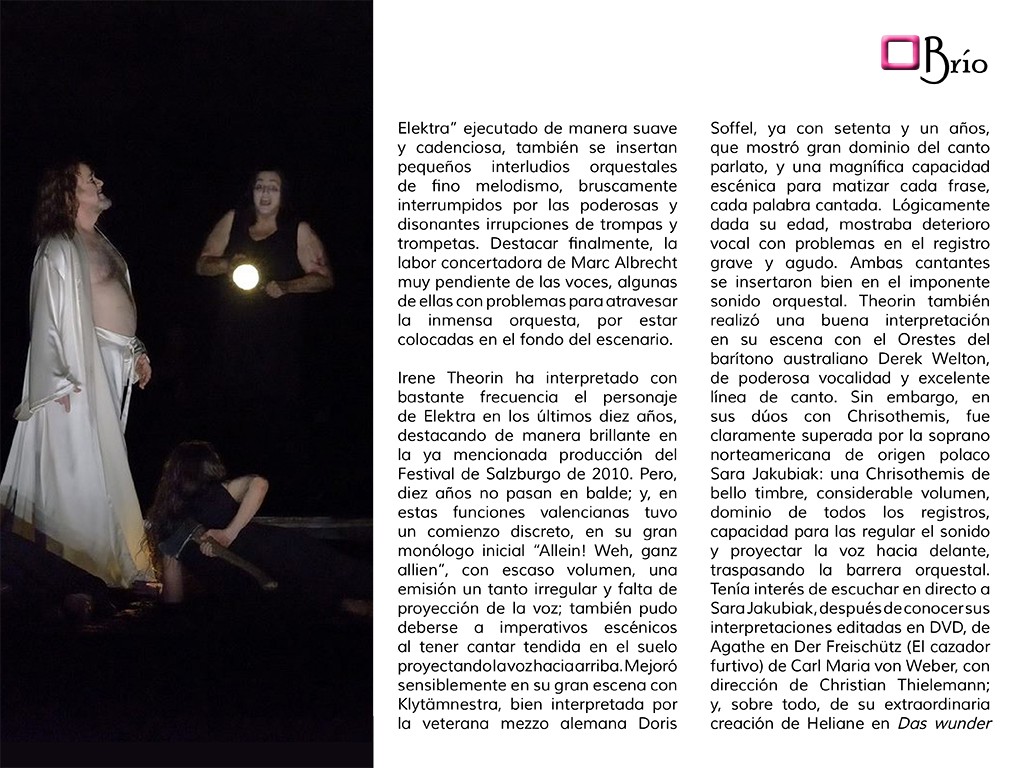 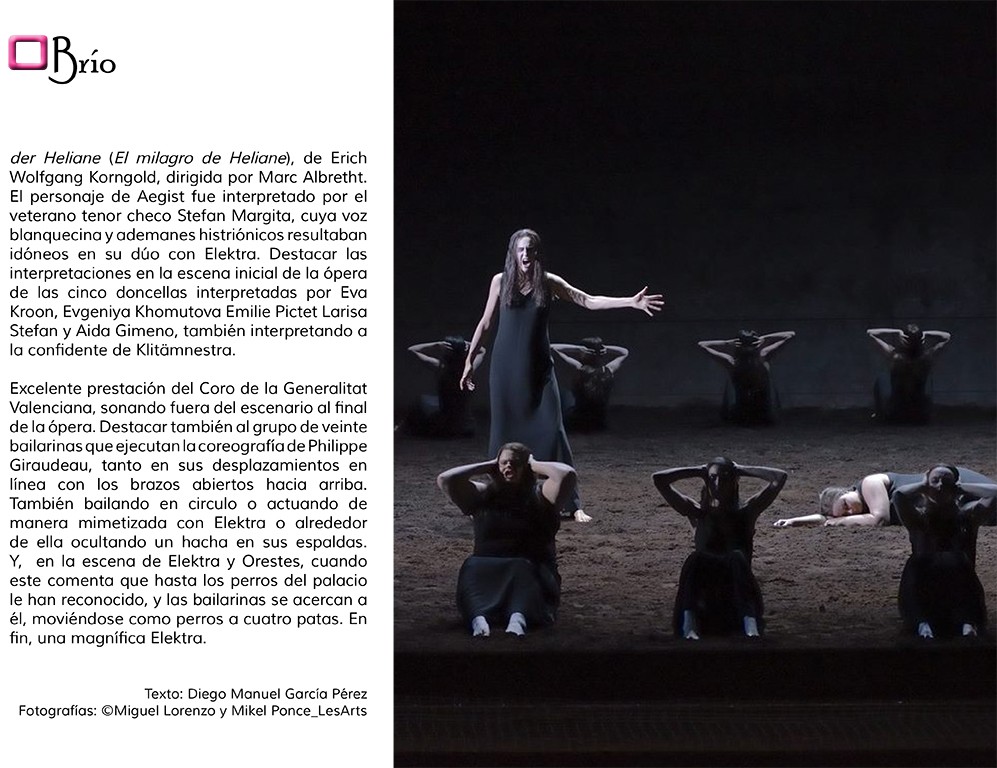 Production presented in Valencia, It comes from the National Opera of Paris, based on a co-production of the Maggio Musicale Fiorentino and the Tokyo Opera Nomori, with stage direction by Robert Carsen and Michael Levine scenery totally minimalist character, with a stage of absolute nudity consisting of a large enclosed by three walls that are curved in its support base on stage, with an earthy dark sandy soil where a multipurpose rectangular recess opens, because it is the tomb of Agamemnon and entry into the palace inhabited by kings Klytämnestra and Aegisth, murderers of Agamemnon. Actually, the attractiveness of this production lies in the ability of Robert Carsen to move with great dramatic sense a lot of extras around the protagonists. Entry is shocking scene Klytämnestra fully dressed in white on a white bed also, which is carried as a throne for the many ballerinas-figurantes. White is highlighted by a suitable spotlighting, within the scenic dark and black clothes of the other characters. Highlight of this staging the moment Elektra, in his opening monologue, He invokes the figure of his father Agamemnon and figurantes extract it from his tomb and handing it Elektra porting. Choreographic movements of the dancers and the focal lighting designed by Robert Carsen and Peter own van Praet, also confer real attraction to this scenery. Also noteworthy costume design by Vazul Matusz, black for the actors and extras, compared with white garments and carrying Klytämnestra Aegisth.

Elektra It is an opera where the vast orchestra of over one hundred musicians acquires absolute role and solo voices are inserted as an instrument. The Orquesta de Valencia, substantially enlarged hundred three performers, again demonstrated its extreme quality, with superb direction of Marc Albrecht, full transparency, with perfect differentiation of sound levels and offering a range of nuances in the dense and extraordinary orchestration that Strauss conceived for this opera. Albrecht handled well the dynamics. All orchestral sections scratched at high altitude, with a sumptuous string, capable of alternating sounds very strong forcefully and wonderful we pianissimos. Strauss has the novelty of three groups of first, second and third violins, each with eight instrumentalists, along with other three first, second and third violas, each with six instrumentalists, and severe rope first six cellos and six seconds, with eight double basses. Ya, single rope, no less than sixty two performers by far exceeds the dimensions of a classical orchestra. Metals also flashed high, with imposing sonorities of the tubes, trombones and trumpets, also capable of delicate issue we pianissimo. Orchestral response was always consistent with the complexity of this rich score where tonal passages are mixed with other immersed in pure atonalidad, in contrast to many fine moments almost chamber music melodismo. At the same start of the opera can be heard Agamemnon theme, fortissimo brilliantly issued by horn and trumpet unison with all the rope, to the following pianissimo faint sound of trombones and basses. This issue becomes recurring with different variations throughout the opera: appearance of Orestes in his big scene with Elektra, who returns to sing a ruthless tone and ironic when Klytemnestra and Aegisth are killed by Orestes, and reappears in the amazing duo of Elektra and Chrisotemys, almost at the end of the opera, with all the savage intensity of the beginning, repeated three times resembling lightning storm folded Elektra, after its frenetic dance to celebrate the death of Klytämnestra and Aegisth. The other recurring theme of this opera is called "Elektra chord", where Strauss uses polytonality, which you can already be heard for the first time, Episodic so in the opening scene of maidens and sumptuous reappearing mode, repeatedly executed by rope and wood in the scenic entrance Elektra. Highlight the subject of intense lyricism and melodic Chrysotemis expansions in the first of his duets with Elektras, where interventions have bright metals and especially the five tubes. Definitely, the climax of this opera and where the Orchestra of Valencia shone at higher altitudes, it is all the great scene Klytämnestra and Elektra, with an introductory orchestral interlude strongly atonal character, which involved all sections in a stunning orchestral crescendo, that during it allows the brilliance of percussion and metals, especially tubas and trumpets. In the dialogue of mother and daughter alternating dissonance and melody, highlighting the occasional presence of a trombone muted and the combined sound of harps and contrafagot, along with the numerous interventions of the celesta (instrument appreciated by Strauss). Another great moment is the interlude preceding the scenic eruption of Orestes, dominated by the sound of metals, with forays cello and bassoon. The orchestra also shone in the long Elektra and Orestes duo, which reappears "Elektra chord" executed soft, lilting way, small orchestral interludes are also inserted fine melodismo, abruptly interrupted by the powerful and dissonant bursts of horns and trumpets. finally note, the conciliatory work of Marc Albrecht very aware of the voices, some with problems through the immense orchestra, to be placed at the bottom of the stage.

Irene Theorin has played quite often the character of Elektra in the last ten years, highlighting brilliantly in the aforementioned production of the Salzburg Festival 2010. But, ten years does go in vain; Y, Valencian these functions had a modest start, in his great monologue initial "Allein! Sore, very allien ", with low volume, an emission somewhat irregular and lack of voice projection; It could also be due to stage imperatives having lying on the floor singing voice projecting upward. It improved significantly in his big scene with Klytämnestra, well played by veteran German mezzo Doris Soffel, and with seventy-one years, who showed great mastery of the song parlato, and a magnificent scenic capacity to refine each phrase, every word sung. Logically, given his age, Vocal problems showed deterioration in the low register and acute. Both singers were inserted well in the orchestral sound impressive. Theorin also made a good performance in his scene with Orestes of the Australian baritone Derek Welton, powerful vocalism and excellent singing line. But nevertheless, in his duets with Chrisothemis, It was clearly surpassed by the American soprano Sara Jakubiak Polish origin: one Chrisothemis of beautiful timbre, considerable, domain of all records, the ability to regulate the sound and project your voice forward, transferring the barrier orchestral. I was interested to hear live Sara Jakubiak, after knowing their interpretations edited on DVD, of Agathe The Marksman (The poacher) de Carl Maria von Weber, directed by Christian Thielemann; Y, especially, his extraordinary creation in Heliane The miracle of Sunray (The Miracle of Heliane), de Erich Wolfgang Korngold, directed by Marc Albretht. Aegist's character was played by tenor Stefan Margita Czech veteran, Whitish whose voice and histrionic gestures proved suitable in his duet with Elektra. Highlight the performances in the opening scene of the opera of the five maidens played by Eva Kroon, Evgeniya Khomutova Emilie Pictet Larisa Stefan y Aida Gimeno, also playing the confidant of Klitämnestra.

Excellent performance of the Choir of the Generalitat Valenciana, ringing off the stage at the end of the opera. also highlight the group of twenty dancers perform choreography by Philippe Giraudeau the, both on their travels online with open arms up. Also dancing in a circle or acting mimicked way with Elektra or around an ax hiding behind. Y, at the scene of Elektra and Orestes, when it says that even dogs of the palace would have recognized, and the dancers approach him, moving on all fours like dogs. Anyway, one magnificent Elektra. 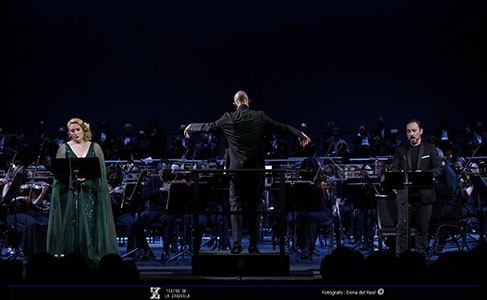