Home › Features › The magic Flute, Of whom! at the Theatre Royal 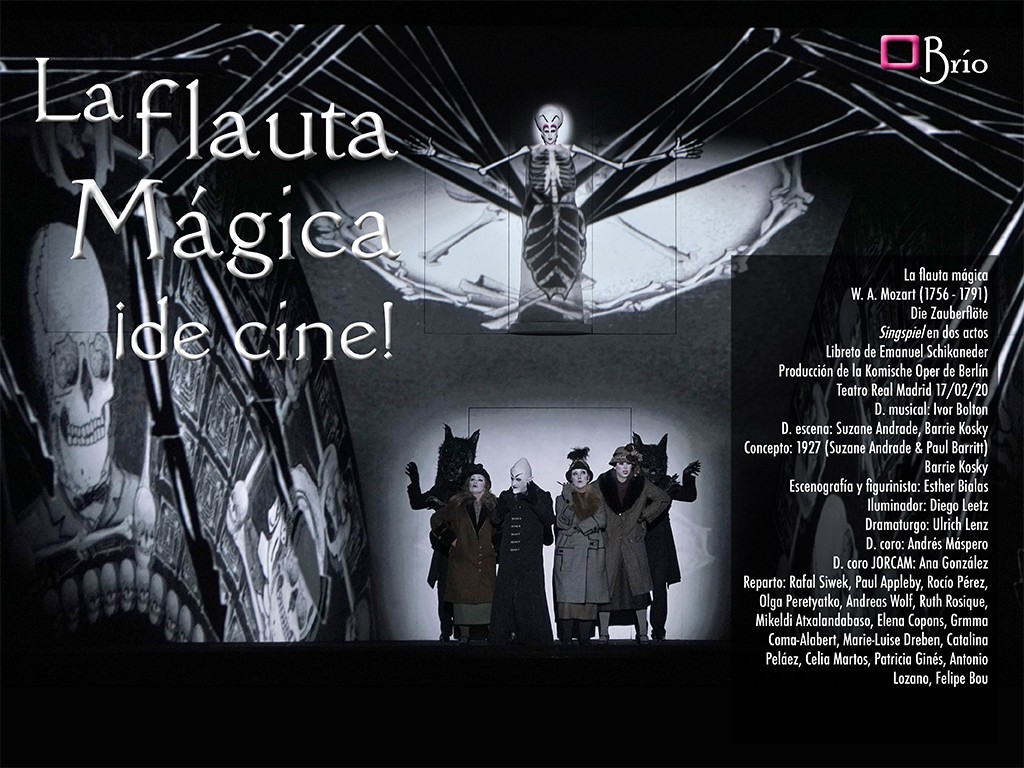 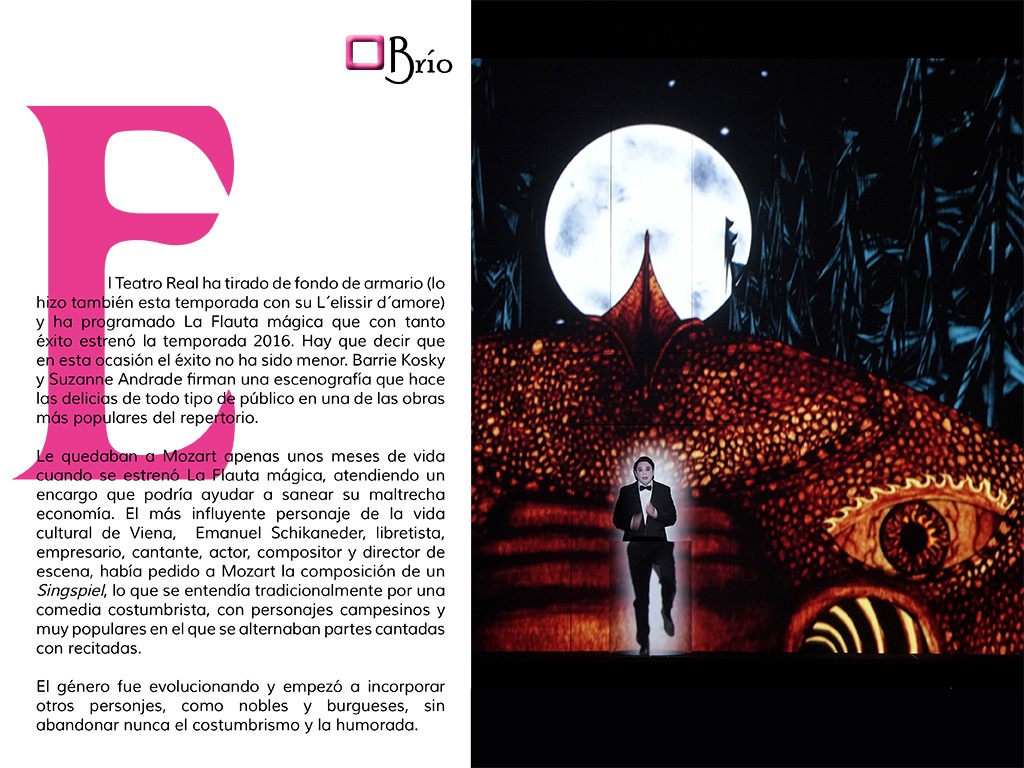 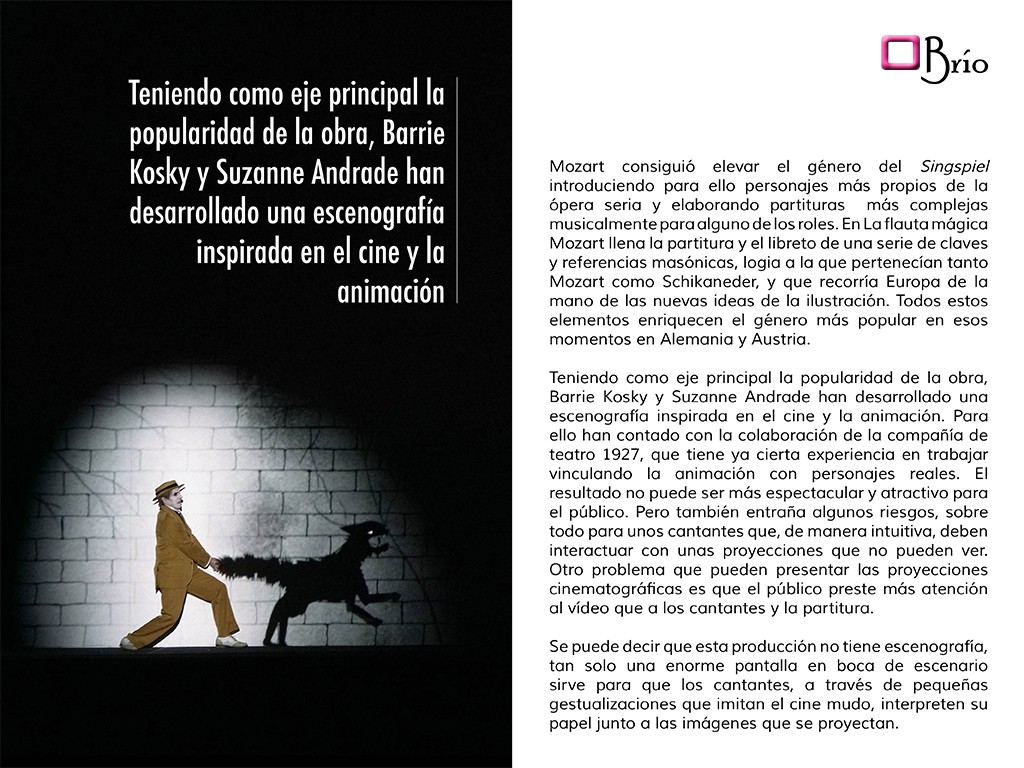 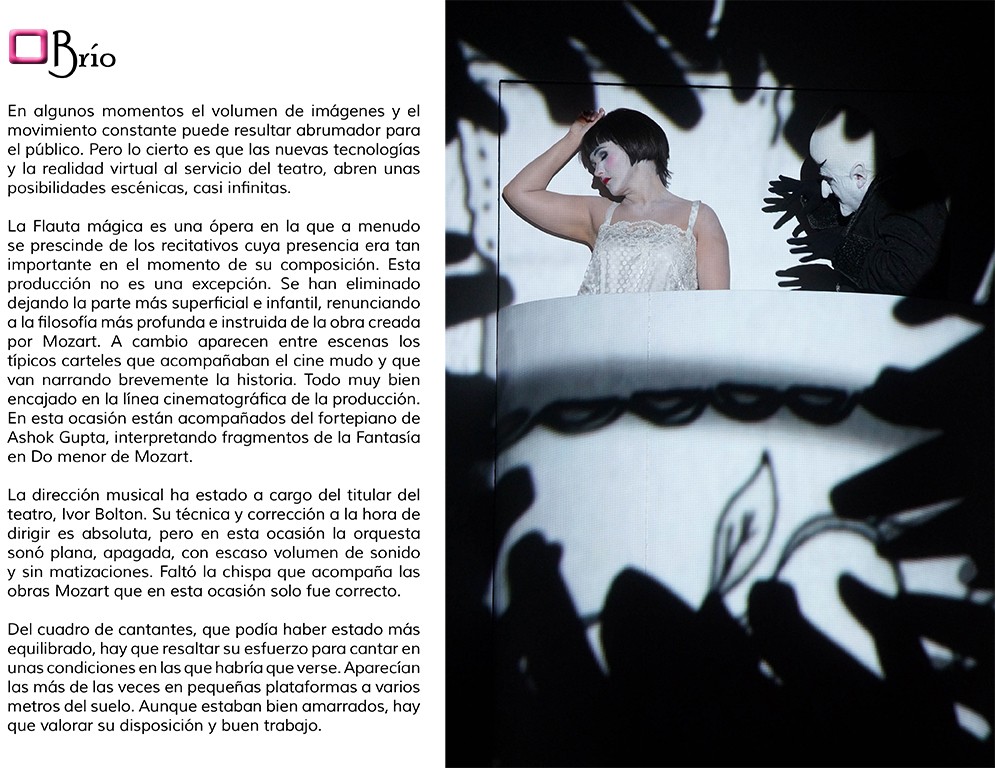 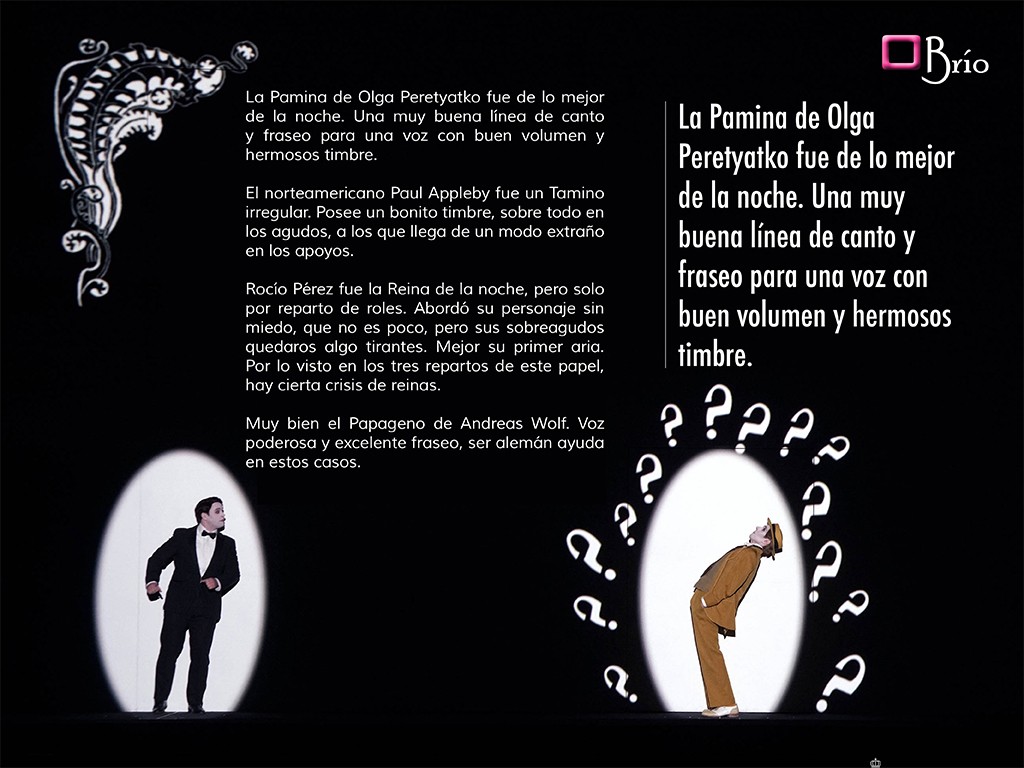 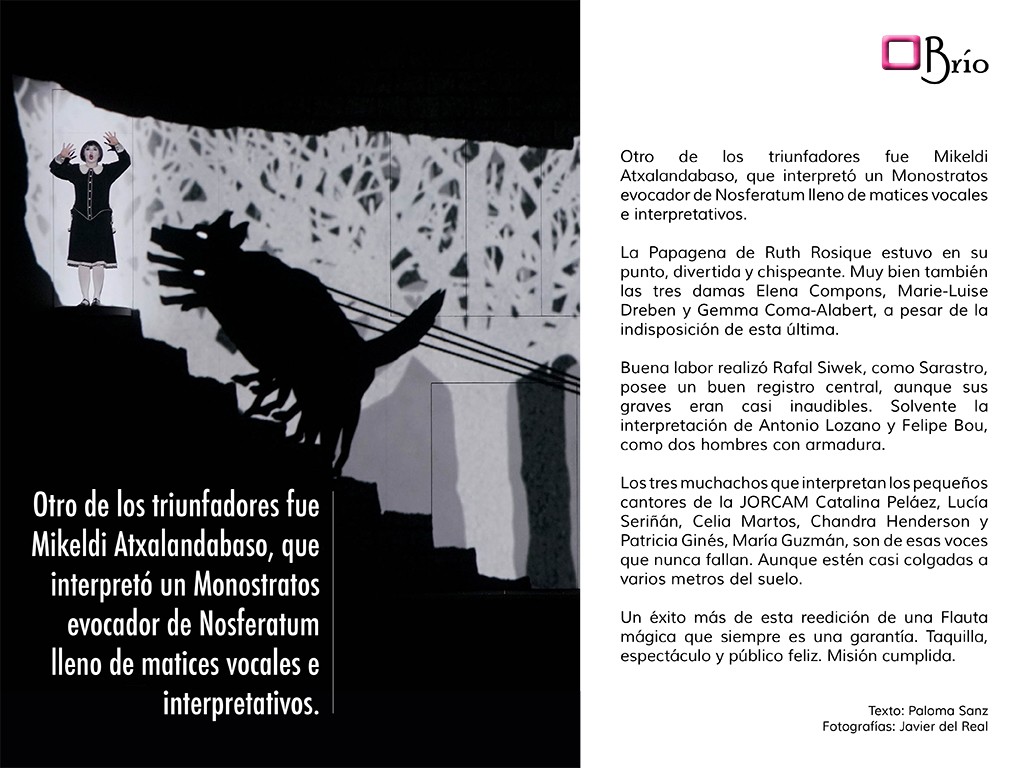 The magic Flute, Of whom!
The magic Flute
W. A. Mozart (1756 – 1791)
The Magic Flute
Singspiel in two acts
Record of Emanuel Schikaneder
Komische Oper production Berlin
Teatro Real Madrid 17/02/20
D. musical: Ivor Bolton
D. scene: Suzanne Andrade, Barrie Kosky
Concept: 1927 (Suzanne Andrade & Paul Barritt)Barrie Kosky
Set and costume designer: Esther Bialas
illuminator: Diego Leetz
Playwright: Ulrich Lenz
D. choir: Andrés Máspero
D. JORCAM choir: Ana González
Distribution: Rafal Siwek, Paul Appleby, Rocío Pérez, olga Peretyatko, Andreas Wolf, Ruth Rosique, Mikeldi Atxalandabaso, Elena Copons, As Grmma-Alabert, Marie-Luise Dreben, Catalina Pelaez, Celia Martos, Patricia Ginés, Antonio Lozano, Felipe Bou
T he Royal Theater has pulled wardrobe (so did this season with his L'elissir d'amore) and The Magic Flute programmed so successfully opened the season 2016. I must say that this time success has not been lower. Barrie Kosky and Suzanne Andrade sign a scenery that delights all audiences in one of the most popular works of Mozart were the repertorio.Le just a few months old when it premiered The Magic Flute, attending a commission that could help clean up its battered economy. The most influential figure in the cultural life of Vienna, Emanuel Schikaneder, librettist, businessman, singer, actor, composer and stage director, Mozart had asked the composition of a Singspiel, what it is traditionally understood by a comedy of manners, with peasants and popular characters in which parts sung with gender recitadas.El he alternated evolved and began to incorporate other character created, as noble and Bourgeois, without ever leaving the costumbrismo and humorada.
Mozart managed to raise the genre of the Singspiel keying in more typical opera seria characters and develop more complex musical scores for some of the roles. The Magic Flute Mozart fills the score and the libretto for a number of keys and Masonic references, lodge they are belonging to both Mozart and Schikaneder, and that crossed Europe from the hand of new ideas illustration. All these elements enrich the most popular genre at the time in Germany and Austria.

With the main axis of the popularity of the work, Barrie Kosky and Suzanne Andrade have developed a set design inspired by the film and animation. This could not have enjoyed the cooperation of the theater company 1927, you already have some experience in working linking animation with real characters. The result could not be more dramatic and appealing to the public. But also carries some risks, especially for some singers who, intuitively, They must interact with projections that they can not see. Another problem that may present film screenings is that the public pay more attention to the video that the singers and the score.

One can say that this production does not have scenery, just a huge proscenium screen serves for singers, through small gestualizaciones that mimic the silent film, play their role alongside the images projected.
At times the volume of images and constant movement can be overwhelming for the public. But the truth is that new technologies and virtual reality theater service, open a scenic possibilities, almost endless.

The Magic Flute is an opera in which often dispenses with the recitatives whose presence was so important at the time of its composition. This production is no exception. They have been removed leaving the surface and infant part, renouncing the deepest and educated philosophy of work created by Mozart. A change appear between scenes typical signs that accompanied silent movies and going briefly narrating the story. All very well embedded in the film production line. This time they are accompanied by the fortepiano Ashok Gupta, interpreting fragments of Fantasy in C minor Mozart.

The musical direction has been in charge of the owner of the theater, Ivor Bolton. His technique and correction when directing is absolute, but on this occasion the orchestra sounded flat, off, with low sound volume without shadings. It lacked the spark that accompanies Mozart works on this one occasion was right.

Singers of the box, I could have been more balanced, we must highlight his efforts to sing in conditions which would have to be. They appeared most often on small platforms to several meters from the ground. Although they were well secured, available and good work must be evaluated.
The Pamina Peretyatko Olga was the best night. A very good line of singing and phrasing for a voice with good volume and beautiful timbre.

American Paul Appleby was a Tamino irregular. It has a nice timbre, especially acute, that arrives in a strange way in braces.

Rocio Perez was the Queen of the Night, but only by sharing roles. He boarded his character without fear, which it is something, but his treble quedaros something suspenders. Better his first aria. As seen in the three deals of this paper, there is some crisis queens.

Well the Papageno Andreas Wolf. powerful and excellent voice fraseo, being German help in these cases.
Another of the winners was Mikeldi Atxalandabaso, who played an evocative Monostratos of Nosferatum full of vocal nuances and interpretative.

The Papagena Ruth Rosique was in his point, fun and sparkling. Very good also the three ladies Elena Compons, Marie-Luise Dreben and Gemma Coma-Alabert, despite the latter's indisposition.

Rafal Siwek good work done, as Sarastro, It has a good central register, although his grave were almost inaudible. Solvente the interpretation of Antonio Lozano and Felipe Bou, as two men in armor.

The three boys who play the young singers of the JORCAM Catalina Pelaez, Lucia Seriñán, Celia Martos, Chandra Henderson and Patricia Ginés, Maria Guzman, Are those voices that never fail. Although they are almost hung several meters from the ground.

A success over this reissue of a magic flute that is always a guarantee. Ticket office, show and happy audience. Mission accomplished.