A Doña Francisquita full of contradictions 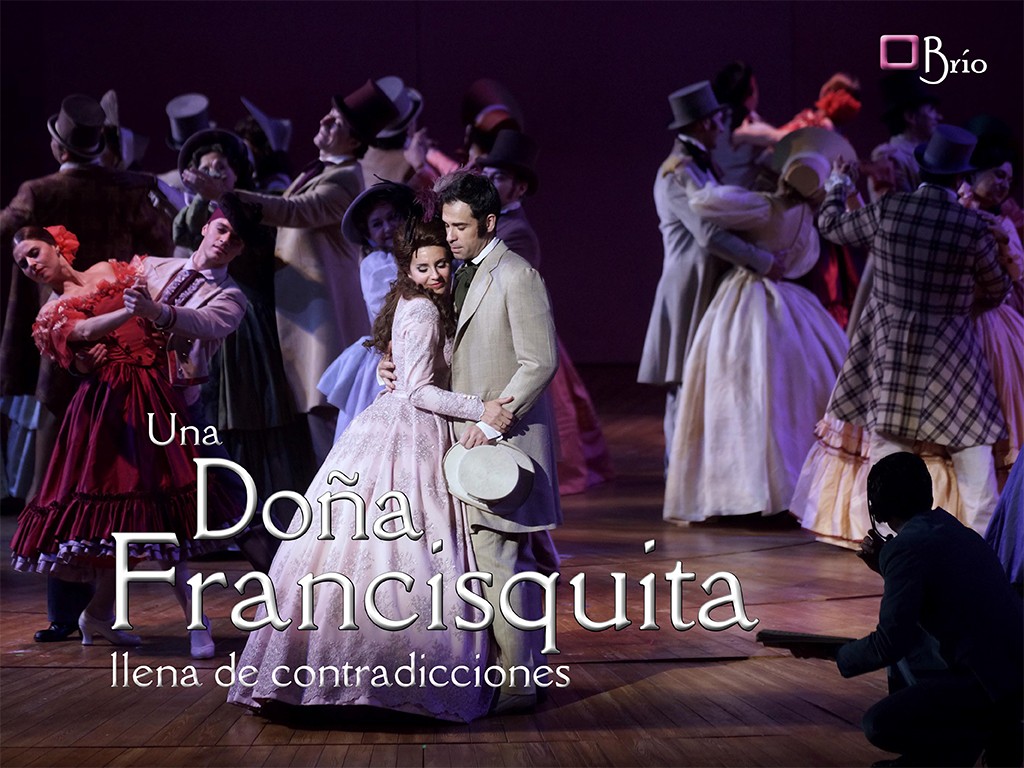 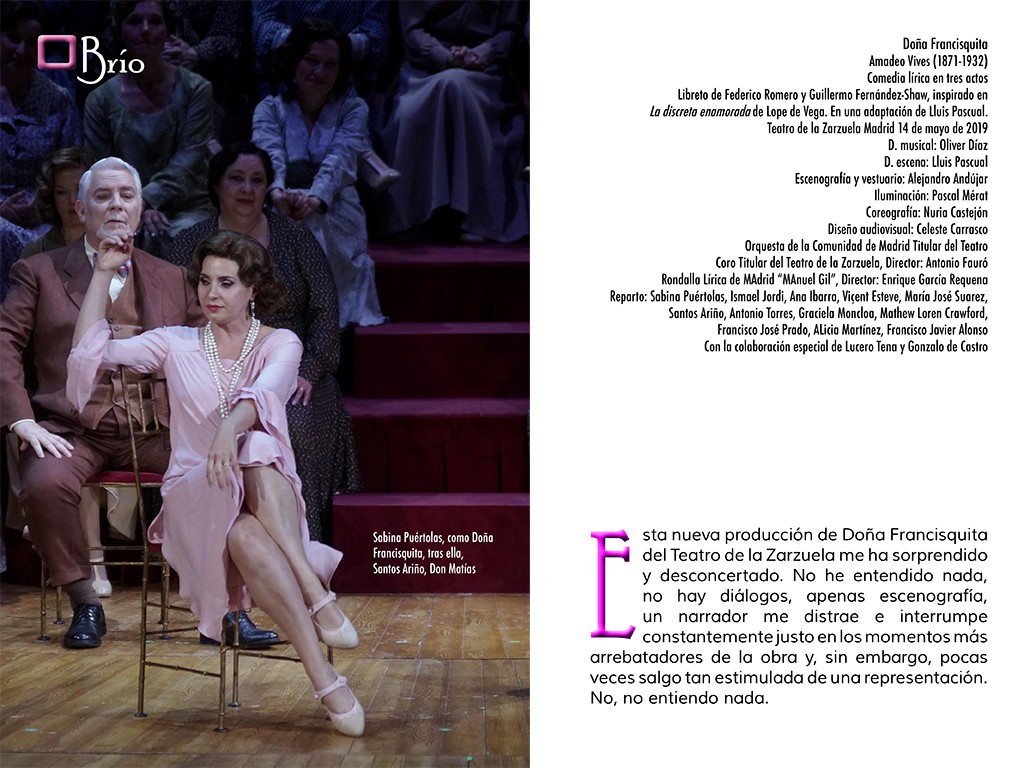 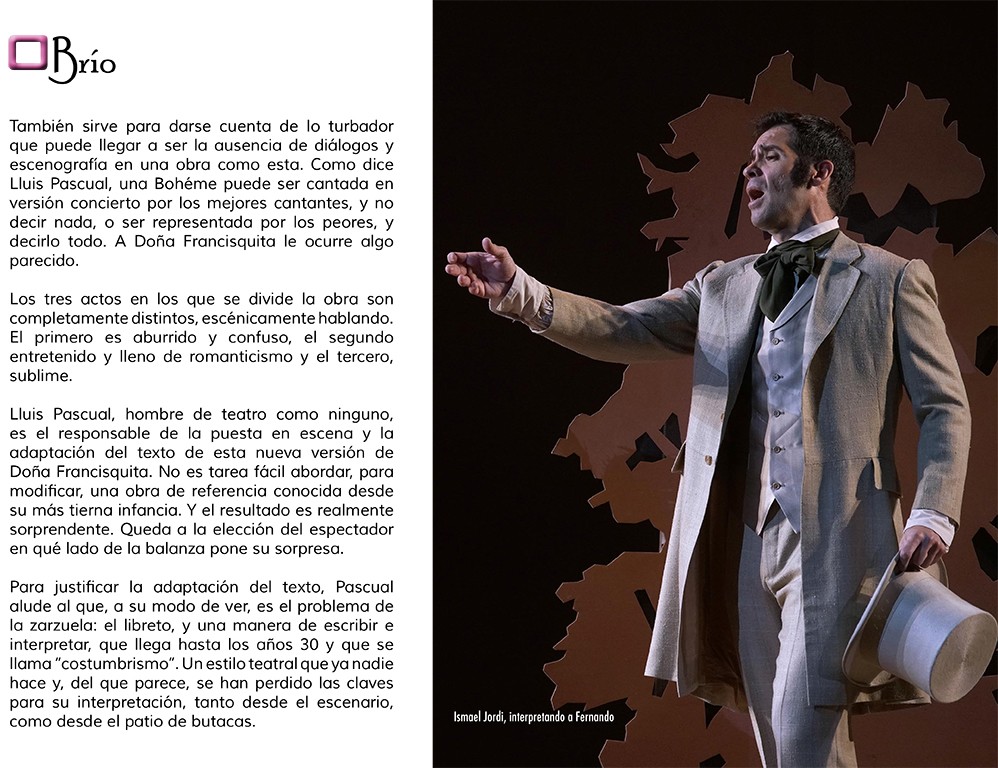 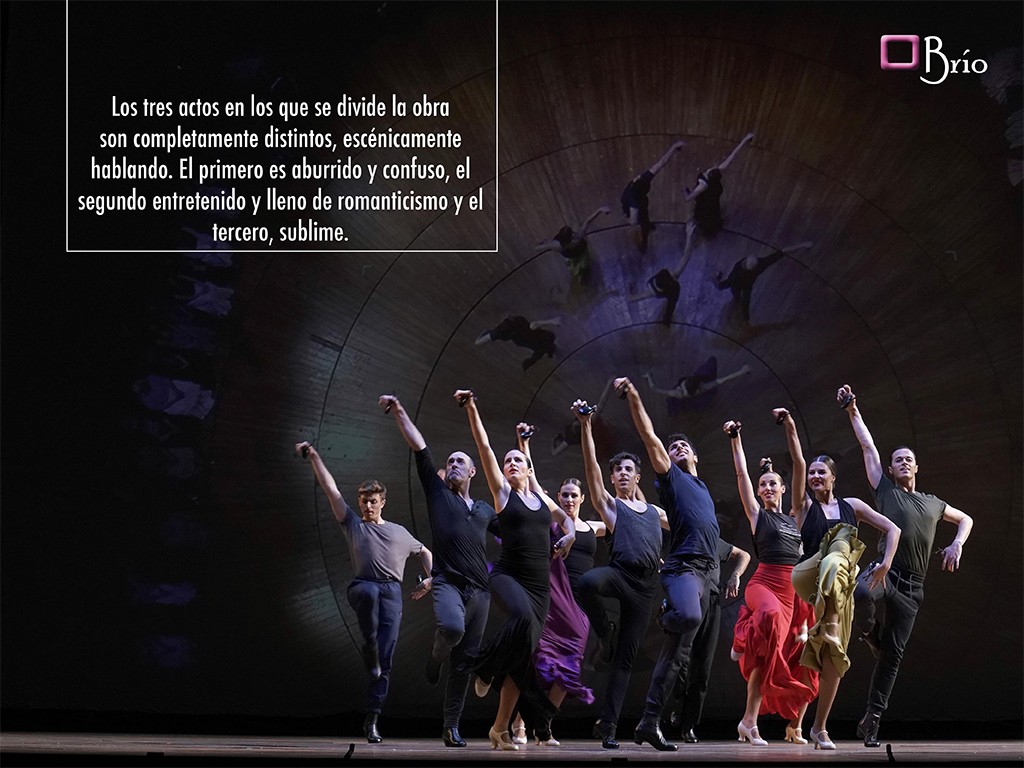 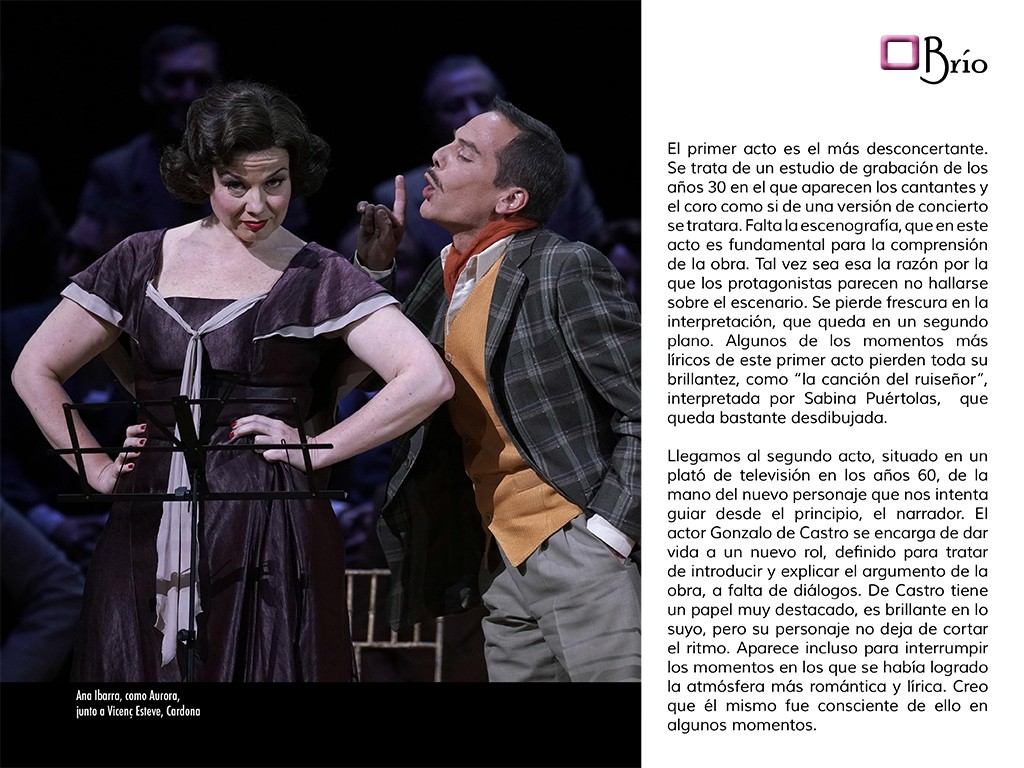 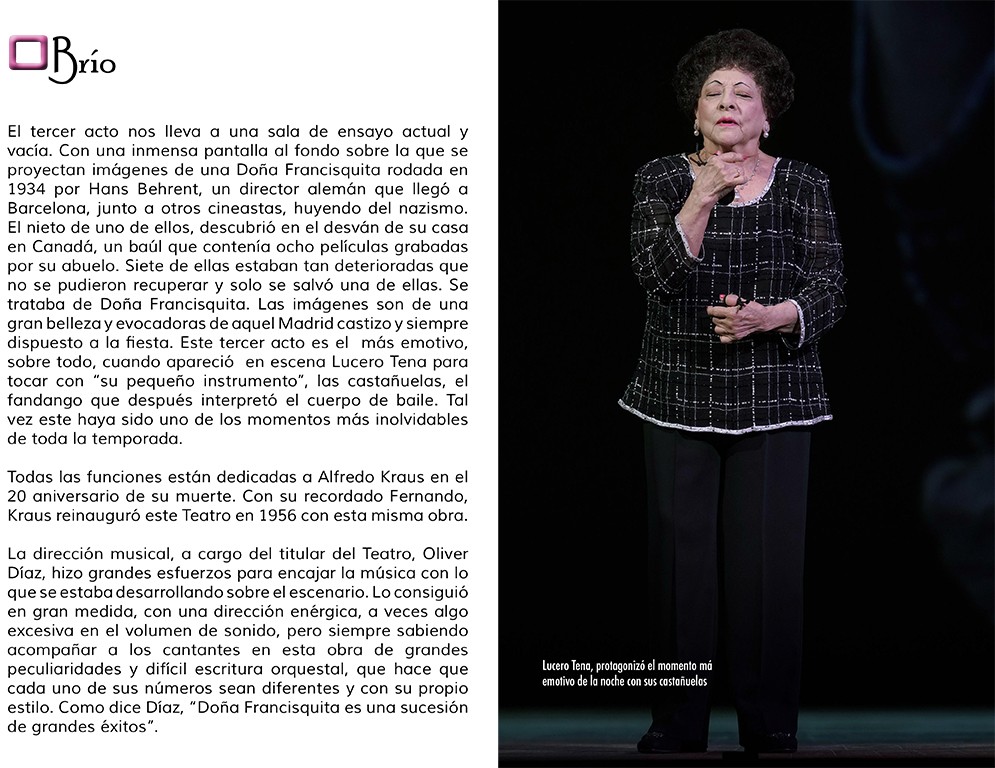 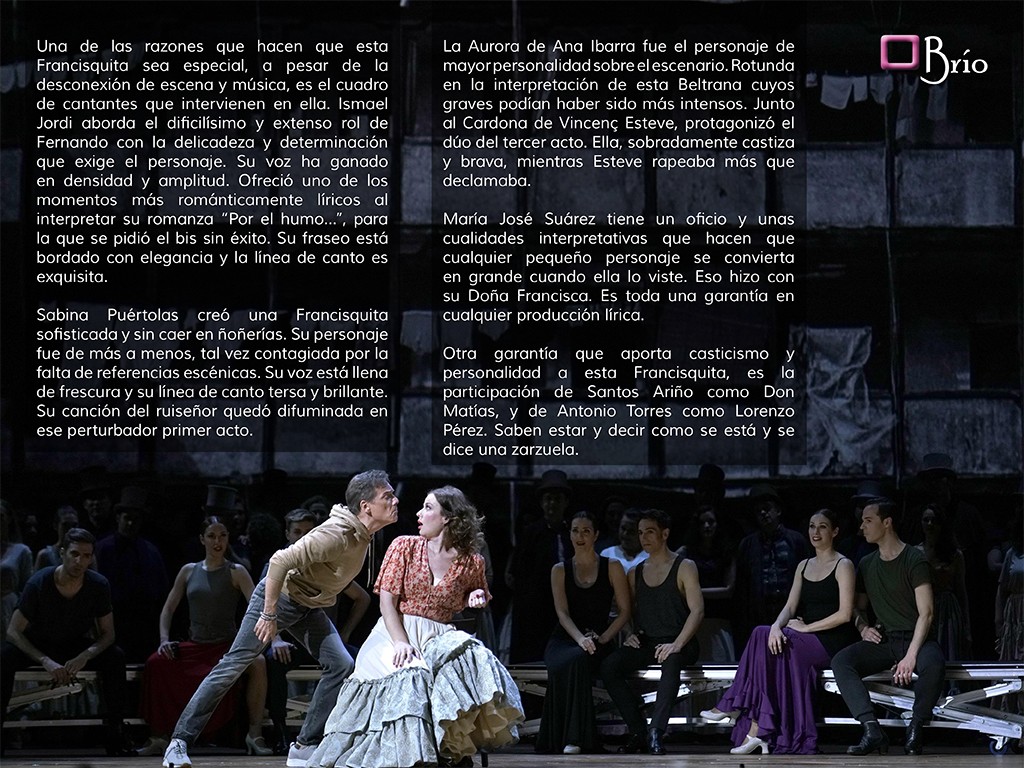 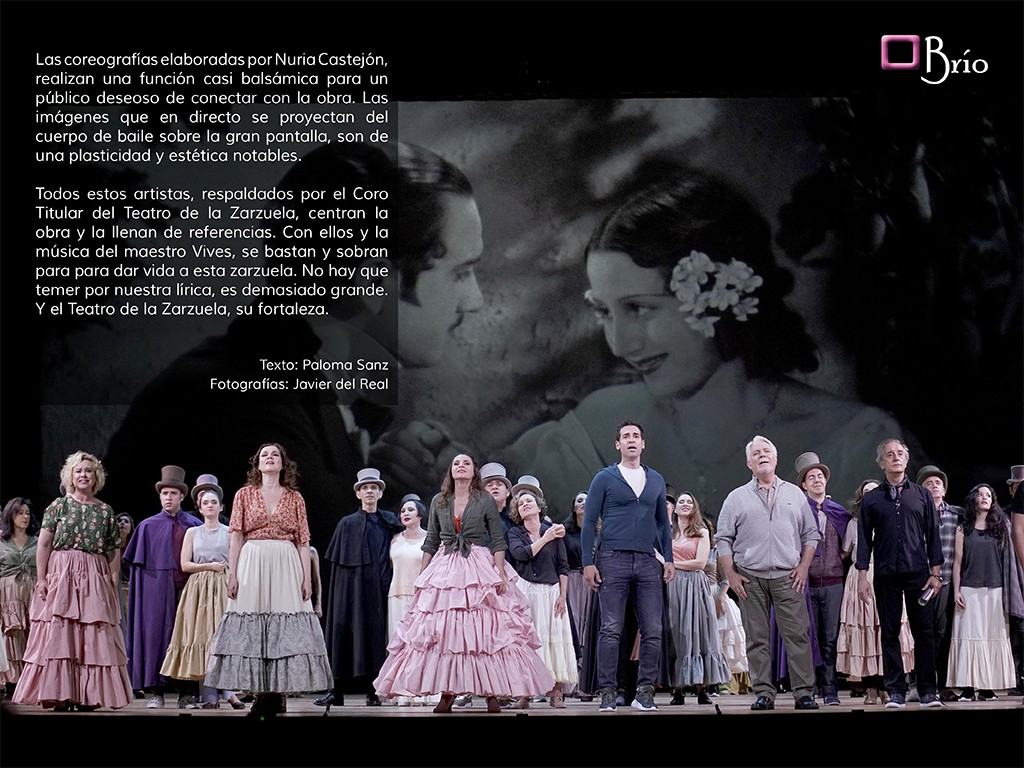 A Doña Francisquita full of contradictions
Doña Francisquita
Amadeo Vives (1871-1932)
lyrical comedy in three acts
Libretto by Federico Romero and Guillermo Fernandez-Shaw, inspired by
The discreet love of Lope de Vega. In an adaptation of Lluis Pascual.
Teatro de la Zarzuela Madrid 14 May 2019
D. musical: Oliver Diaz
D. scene: Lluis Pascual
Sets and costumes: Alejandro Andújar
Lighting: Pascal Mera
Choreography: Nuria Castejón
audiovisual design: Celeste Carrasco
Community of Madrid Orchestra Titular del Teatro
Holder Choir Teatro de la Zarzuela, Director: Antonio Fauró
Lyric Madrid Rondalla "Manuel Gil", Director: Enrique García Requena
Distribution: Sabina Puértolas, Ismael Jordi, Ana Ibarra, Vincent Was, Maria Jose Suarez,
Santos Ariño, Antonio Torres, Graciela Moncloa, Mathew Loren Crawford,
Francisco José Prado, Alicia Martinez, Francisco Javier Alonso
With the special collaboration of Lucero Tena and Gonzalo de Castro
This new production of Doña Francisquita the Teatro de la Zarzuela has surprised and puzzled me. I have not understood anything, no dialogues, just scenery, a narrator constantly distracted and interrupted me right in the most ravishing moments of the work and, but nevertheless, rarely go so stimulated representation. No, I do not understand nada.También serves to realize how disturbing it can be the absence of dialogue and stage in a work like this. Lluis Pascual says, one Bohéme can be sung in concert version by the best singers, and say nothing, or be represented by the worst, and say everything. A Doña Francisquita something happens parecido.Los three acts in which it divides the work are completely different, scenically speaking. The first is boring and confusing, the second entertaining and full of romanticism and the third, Pascual sublime.Lluis, showman like no other, He is responsible for the staging and adaptation of the text of this new version of Doña Francisquita. No easy task address, to modify, a reference work known since early childhood. And the result is truly amazing. surprise is the choice of the viewer on which side of the scale sets.

To justify the adaptation of the text, Pascual alludes to that, in their view, It is the problem of zarzuela: the script, and a way to write and interpret, which reaches years 30 and it called "costumbrismo". A theatrical style that nobody does and, which seems, They have lost the keys to their interpretation, both from the stage, and from the stalls.
The first act is the most baffling. It is a recording studio the years 30 in which the singers and chorus appear as if a concert version were. Missing scenery, that this act is fundamental to the understanding of the work. Perhaps that's why the protagonists seem to be on stage. freshness is lost in interpretation, remaining in the background. Some of the most lyrical moments of this first act lose all their brilliance, as "the song of the nightingale", played by Sabina Puértolas, which it is quite blurred.

We reached the second act, Located in a TV studio in the years 60, hand new character who tries to guide us from the beginning, the narrator. Gonzalo de Castro actor responsible for giving life to a new role, defined to try to introduce and explain the plot of the play, the lack of dialogue. De Castro has a very important role, It is brilliant at what he does, but his character does not stop cutting the pace. It appears even to interrupt the moments when he had achieved the most romantic and lyrical atmosphere. I think he was aware of it at times.

The third act brings us to a current rehearsal room and empty. With a huge screen in the background on which images of a Francisquita Doña shot projected on 1934 por His Behrent, a German director who came to Barcelona, along with other filmmakers, fleeing Nazism. The grandson of one of them, He discovered in the attic of his home in Canada, a trunk containing eight movies recorded by his grandfather. Seven of them were so damaged that could not be recovered and only one of them was saved. It was Doña Francisquita. The images are of great beauty and evocative of that old Madrid and always ready to party. The third act is the most emotional, especially, when he appeared on stage Lucero Tena to play with "his little instrument", the castanets, the fandango that after the dance troupe performed. Perhaps this has been one of the most unforgettable moments of the season.

All functions are dedicated to Alfredo Kraus in 20 anniversary of his death. With its recalled Fernando, Kraus is reopened Theater 1956 this same work.

Musical direction, by the holder Theater, Oliver Diaz, He made great efforts to match music with what was unfolding on stage. He succeeded largely, Bold leadership, sometimes somewhat excessive sound volume, but always knowing accompany the singers in this work of great peculiarities and difficult orchestral writing, that makes each of his numbers are different and with its own style. As Diaz says, "Doña Francisquita is a succession of great successes".

One of the reasons why this is special Francisquita, despite the disconnection and music scene, is the picture of singers involved in it. Ismael Jordi addresses the very difficult and extensive role of Fernando with the delicacy and determination that requires the character. His voice has gained in density and amplitude. He offered one of the most romantically lyrical moments in interpreting its Romanza "by smoke…”, for which unsuccessfully requested bis. His phrasing is embroidered with elegance and exquisite singing line is.

Sabina Puértolas created a sophisticated Francisquita without falling into whining. His character was more less, perhaps it infected by the lack of scenic references. Her voice is full of freshness and edge line smooth and shiny. His song of the nightingale remained blurred in that disturbing first act.
Dawn of Ana Ibarra was the character more personality on stage. Rotunda in the interpretation of this Beltrana whose grave could have been more intense. Next to Vincenç Esteban Cardona, duo starred in the third act. She, amply castiza and brava, while Esteve rapeaba more than declaimed.

María José Suárez has a job and some interpretive qualities that make any little character becomes big when she saw what. That made his Dona Francisca. It is a guarantee in any lyrical production.

Other warranty that provides traditionalism and personality to this Francisquita, It is the participation of Santos Ariño as Don Matias, and Antonio Torres as Lorenzo Pérez. They know how to be and say as is and zarzuela is said.

Choreography by Nuria Castejon made, They perform an almost balmy function for a public eager to connect with the work. Live images are projected body dance on the big screen, They are a remarkable plasticity and aesthetics.