Lucia of Lammermoor, Madness at the Royal Theater 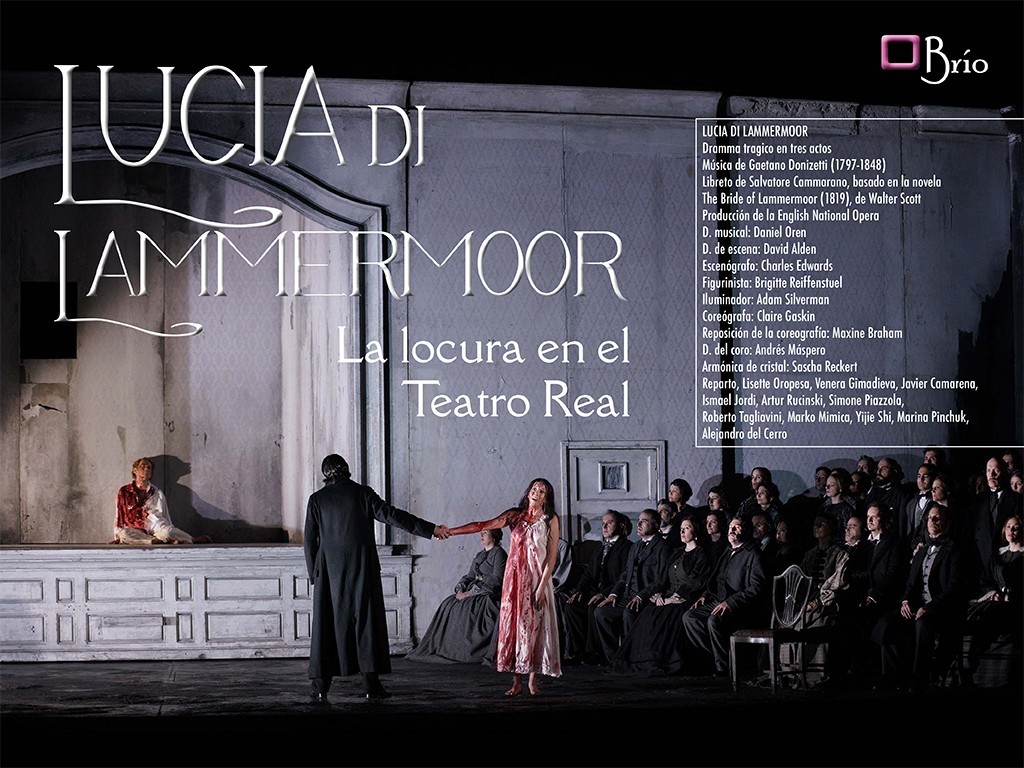 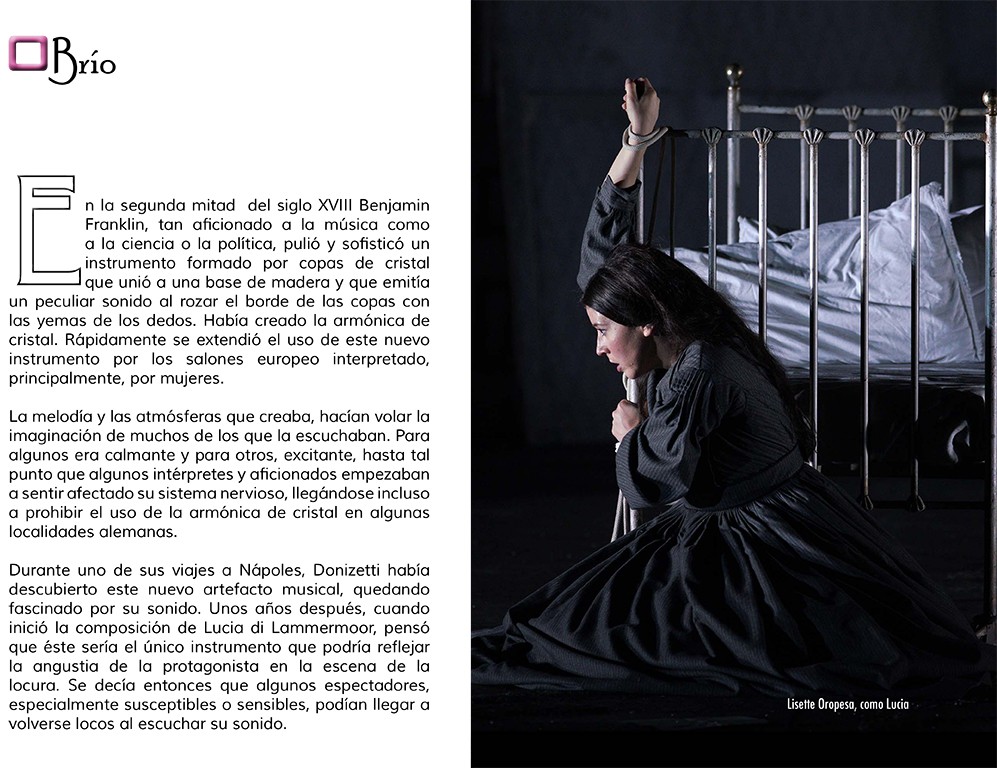 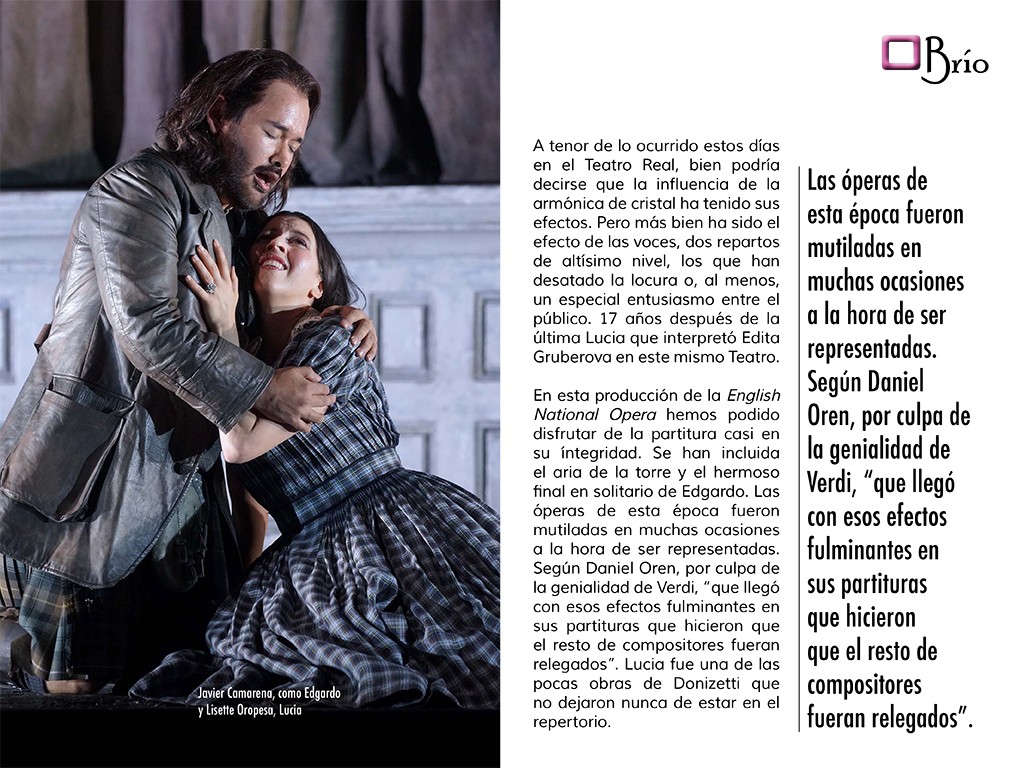 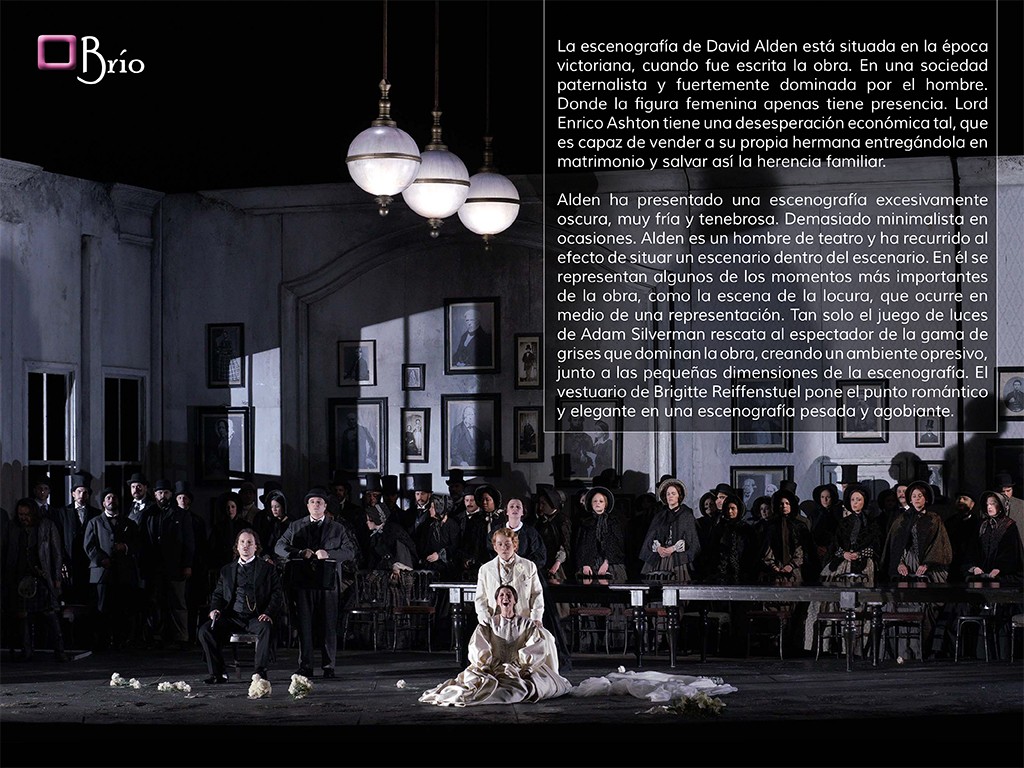 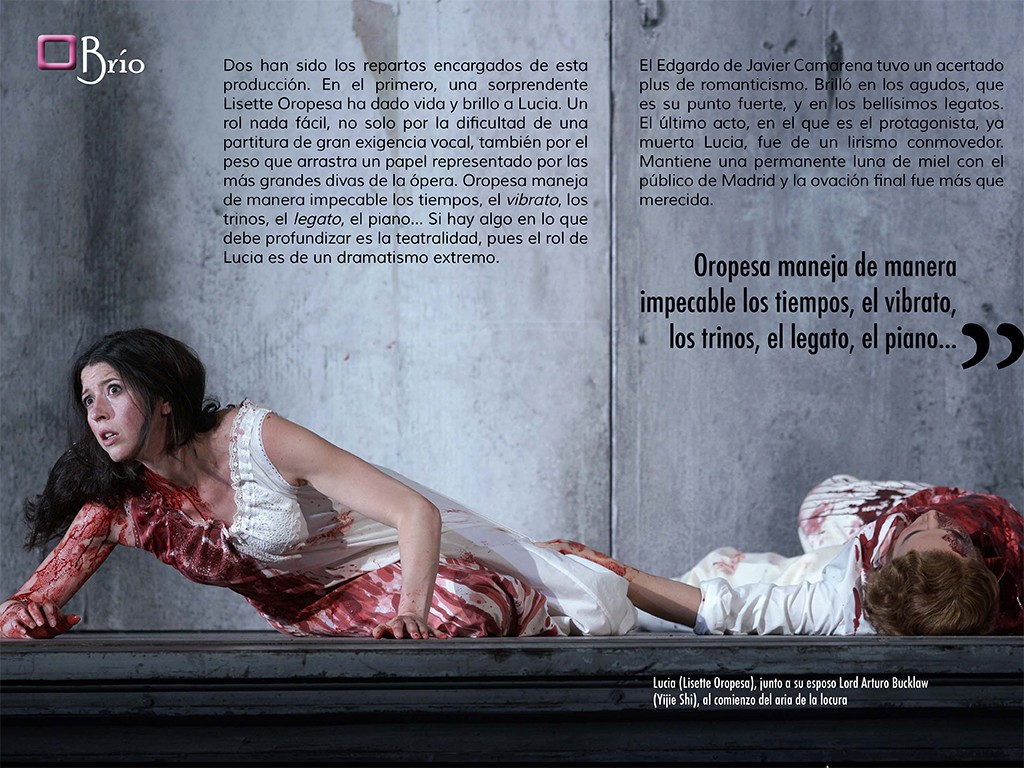 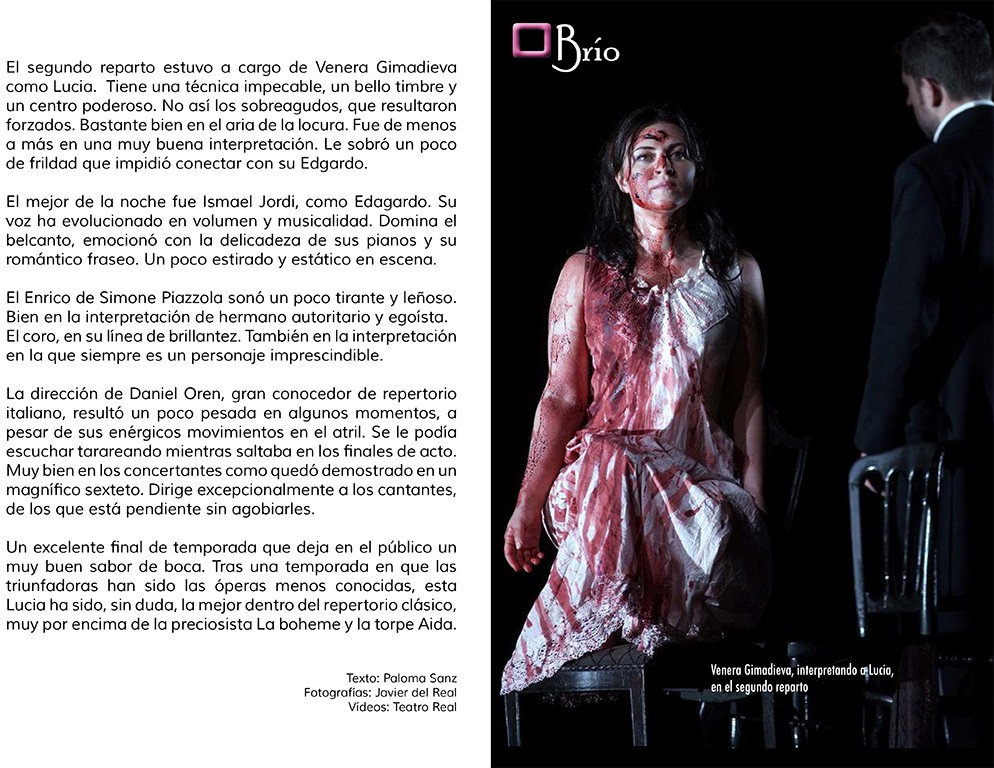 In the second half of the eighteenth century Benjamin Franklin, as fond of music as science or politics, polished and sophisticated instrument formed by crystal glasses joined to a wooden base and emitting a distinctive sound when touching the edge of the cups with the fingertips. He had created the glass harmonica. Quickly use of this new instrument was extended by the European salons interpreted, mainly, by mujeres.La melody and atmosphere creating, They did the imagination of many who listened fly. For some it was soothing and others, exciting, so much so that some players and fans began to feel affected their nervous system, arriving itself even ban the use of glass harmonica in some German towns.

During one of his trips to Naples, Donizetti had discovered this new musical artifact, He is fascinated by its sound. A few years later, when initiated composition Lucia di Lammermoor, he thought that this would be the only instrument that could reflect the anguish of the protagonist on the scene of madness. It was said then that some viewers, especially susceptible or sensitive, They could get to go crazy to hear the sound.

In light of what happened these days at the Royal Theater, While it could be said that the influence of the glass harmonica has had its effects. But rather it has been the effect of voices, two casts of the highest level, those who have unleashed madness or, at least, a special excitement among the public. 17 years after the last Lucia who played Edita Gruberova in this same theater.

In this production Inglés National Opera we have been able to enjoy the score almost entirely. They have included the aria of the tower and the beautiful finish solo Edgardo. The operas of this period were often mutilated when being represented. According to Daniel Oren, because of the genius of Verdi, "Which arrived with such withering effect on their scores that made other composers were relegated". Lucia was one of the few works of Donizetti who never ceased to be in the repertoire.

The scenery of David Alden is located in the Victorian era, when the work was written. In a paternalistic society and heavily dominated by men. Where the female figure hardly any presence. Lord Enrico Ashton has such economic desperation, which he is able to sell his own sister in marriage delivering it and save the family heritage.

Alden has presented an overly dark scenery, very cold and dark. Sometimes too minimalist. Alden is a man of theater and has resorted to the effect of placing a stage within the stage. In it some of the most important moments of the play are represented, as the scene of madness, which it occurs in the middle of a representation. Only the play of light of Adam Silverman rescues the viewer range of grays that dominate the work, creating an oppressive environment, next to the small dimensions of the scenery. Brigitte's wardrobe Reiffenstuel puts the romantic and elegant spot in a heavy and oppressive scenery.

Two distributions have been responsible for this production. In the first, Lisette Oropesa surprising given life and sparkle to Lucia. A role not easy, not only because of the difficulty of a score of great vocal exigency, also by dragging a paper weight represented by the greatest opera divas. Oropesa handles flawlessly times, vibrato, trills, legato, the piano ... If there is something that should deepen is the theatricality, because the role of Lucia is an extreme drama.

Edgar Javier Camarena had a successful plus romance. He shone in acute, which it is his strong point, and the beautiful legato. The last act, where is the protagonist, already dead Lucia, It was a poignant lyricism. It maintains a permanent honeymoon with the public in Madrid and the final standing ovation was well deserved.

The second deal was in charge of Venera Gimadieva as Lucia. It has an impeccable technique, a beautiful timbre and a powerful center. Not so the treble, they were forced. Pretty well in the aria of madness. It was low to a very good performance. Le overran some frildad prevented connect with Edgardo.

The best of the night was Ismael Jordi, Como Edagardo. His voice has evolved in volume and musicality. Dominates the belcanto, It moved with the delicacy of his pianos and his romantic fraseo. A little stiff and static stage.

Directed by Daniel Oren, great connoisseur of Italian repertoire, It was a bit heavy at times, despite his energetic movements at the lectern. He could be heard humming as he jumped in the final act. Well in concertantes as it demonstrated in a magnificent sextet. exceptionally directs the singers, of which it is pending without agobiarles.

Excellent season finale that leaves the audience a very good taste. After a season in which the winners have been the lesser-known operas, This Lucia has been, definitely, the best in the classical repertoire, well above the preciosista La boheme and clumsy Aida.